“We never had any dialogue [with HLI management],” said Lito Bais, a leader of the Luisita union, noting that the Inquirer report on the deal came two weeks before the scheduled oral arguments before the Supreme Court on Aug. 18. Bais said the supposed agreement is meant to send a message to the members of the high court. “They want to influence the outcome of the SC decision.”

MANILA – The farm workers of Hacienda Luisita said Thursday that the supposed “breakthrough deal” being hammered out by the management of the plantation is a “lie” and that it is designed to influence the decision of the Supreme Court, which is set to deliberate soon on whether to distribute the hacienda to farmer beneficiaries or allow the Cojuangco-Aquinos to retain ownership of the disputed property.

In a phone interview with Bulatlat, Lito Bais, acting president of the United Luisita Workers Union (Ulwu), the main labor group in the plantation, said they were surprised to know about the supposed agreement between the farm workers and Haciend Luisita Inc. (HLI). Ulwu led the strike in 2004 that turned violent and left 14 people dead.

The Inquirer reported today that HLI had reached a settlement under which farmer beneficiaries will be given the option to retain shares of stock in the corporation or receive parcels of land from a third of the 6,500-hectare plantation.

“We never had any dialogue [with HLI management],” Bais said, noting that the report came two weeks before the scheduled oral arguments before the Supreme Court on Aug. 18.

Bais said the supposed agreement is meant to send a message to the members of the high court, who will deliberate on the HLI case en banc. “They want to influence the outcome of the SC decision,” he said.

On Dec. 22, 2005, the Presidential Agrarian Reform Council (PARC) revoked the stock distribution option (SDO) in Hacienda Luisita and ordered instead the distribution of the land to the farm workers under the Comprehensive Agrarian Reform Program (CARP). The HLI management contested the ruling before the SC, which, in June 2006, issued a temporary restraining order (TRO) in favor of the Cojuangco-Aquino clan. 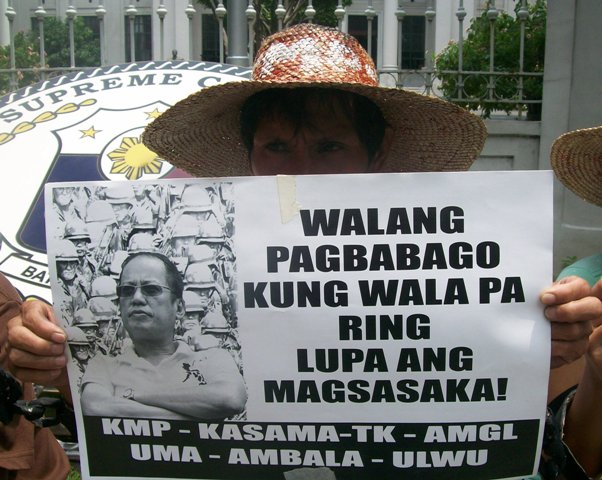 Members of the Kilusang Magbubukid ng Pilipinas (KMP) hold a picket in front of the Supreme Court this morning denouncing the what they call as the latest maneuver of the Cojuangco-Aquino clan to retain control of the Hacienda Luisita. (Photo by Ronalyn V. Olea / bulatlat.com)

The alleged “breakthrough deal,” based on the Inquirer’s report, is anchored entirely on the SDO, the validity of which is now being contested before the SC. The worry, according to Bais, is that if the SC members buy the existence of the supposed deal, they would be less inclined to uphold the ruling of the PARC.