MANILA – Justice Secretary Leila de Lima overturned the move of a subordinate and expressed support for the non-separation of Morong 43 mother and her newborn son.

Carina Judilyn Oliveros, one of the 43 health workers arrested in Morong, Rizal on Feb. 6 gave birth to her first baby July 22 at the Philippine General Hospital (PGH). The legal counsels of the Morong 43 filed a petition before the Morong Regional Trial Court (RTC) for Oliveros’s release on recognizance so she could breastfeed her baby.

Amylyn Sato, one of the legal counsels of the Morong 43, said the petition does not indicate the duration for the temporary release but the pediatrician’s recommendation is six months. The World Health Organization (WHO) recommends exclusive breastfeeding for babies up to six months and continuous breastfeeding with supplementary feeding up to two years old and beyond.

In a dialogue with the relatives, legal counsels and colleagues of the 43 health workers, Aug. 6, De Lima said her office would file a manifestation to the Morong RTC stating the department’s non-objection to the non-separation of the mother and her baby.

De Lima said she had ordered Prosecutor General Claro Arellano to discuss with Senson the withdrawal of the vehement opposition.

Arellano told the Morong 43 legal counsels that Senson told him he would not withdraw his opposition, insisting that the release on recognizance is not possible because the case against the Morong 43 is a non-bailable offense. The 43 health workers have been charged with illegal possession of firearms and explosives. Arellano added that Senson said he would not oppose a move to prolong the stay of the mother and the baby in the hospital. 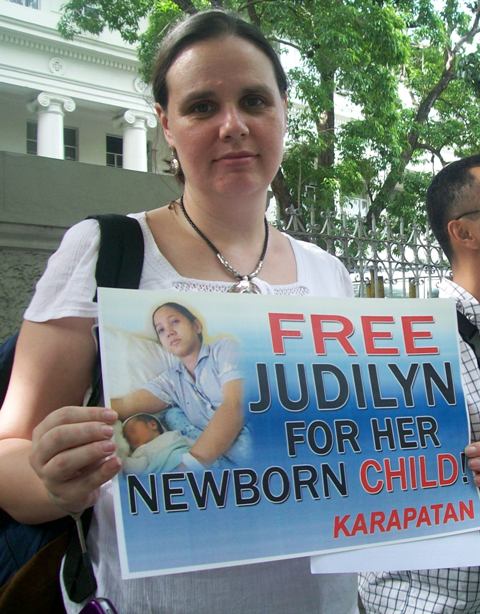 Eleanor Jara, executive director of the Council for Health and Development (CHD), expressed reservations on the proposal. “The hospital is not a place for normal mother and baby to do breastfeeding,” she said.

Romeo T. Capulong, lead counsel of the Morong 43, said it is a better option than the separation of mother and baby.

Bishop Reuel Marigza, general secretary of the United Church of Christ in the Philippines (UCCP), who also attended the dialogue said the detention facility at the Camp Bagong Diwa where the Morong 43 have been detained since May is not a place for a nursing mother and her baby. The UCCP has agreed to take custody of the mother and the baby if the court would grant the petition for temporary release.

“Yes,” De Lima agreed, “that’s not a place for a mother and her baby.”

De Lima said they would let the Morong RTC decide whether to grant the petition for Oliveros’s temporary release.

Asked for comment, Oliveros told Bulatlat: “All I want is to be with my baby. I am glad that the DOJ supports my request not to be separated from my son.”

Capulong said there were cases that political prisoners, even those with non-bailable offenses, were released on humanitarian grounds. “As long as there is no opposition, the courts usually grants the petition for humanitarian reasons,” Capulong said.

Capulong cited the release of Sotero Llamas, National Democratic Front (NDF) leader in 1996. Llamas then was charged with rebellion and insurrection.

Capulong also took the opportunity to voice out the apprehension of the relatives of the Morong 43 regarding Senson. “We were waiting for Senson to inhibit himself from this case [but he did not],” Capulong said.