Under such intense militarization, the farm workers of Hacienda Luisita had to leave their communities for the peasants’ camp-out at Mendiola in various guises.

By day, all seems quiet at the hacienda, the farm workers said, with the locals trying to go about their daily routine even if the military was sowing fear. Asked about their “routine,” Francisco Dizon, 40, told Bulatlat that after the 2004 massacre, “some men became women” in the Hacienda Luisita. He didn’t mean it as a slur; he is just describing the role reversals in their households so they could survive.

As families strive to keep their menfolk alive and avoid military questioning after the massacre, Dizon said the women went out to seek jobs while the men, laid off by Hacienda Luisita Inc. (HLI), were forced to hole up in their homes. Some women became domestic helpers in nearby cities. The men minded the home and the children, and later, the fields, too, after they gathered enough farm inputs and with their “farm collectives” braved to work the lands again.

To this day their chief sources of livelihood remain the hacienda lands, which they have now been planting with rice and vegetables, and which they hope to be finally, formally and physically theirs through a genuine land reform program.

In a statement on Monday, Ramos of the KMP, said the farm workers were “already subjected to an atmosphere of fear and de facto martial law when they were massacred on November 16, 2004, and soldiers used civilian structures such as barangay halls as detachment until present.”

“We totally belie that they are not coerced when actually soldiers never left their communities and employed a martial law rule on the people,” Ramos said in reaction to statements by HLI officials that the farm workers chose to stick with the SDO scheme on their own free will.

“Soldiers were there at Barangay Balete when we held the commemoration of the Hacienda Luisita massacre on November 16, 2009, and they were there when we went to talk to Barangay chairman Renato Luna on July 21 requesting the covered court as venue for our anniversary. He totally rejected our request without saying any valid reason but choose a different barangay as venue. There is an atmosphere of ‘fear’ among residents as soldiers are everywhere,” Ramos said.

“We also asked why the military is based at his barangay and is there any reason for them to be there. Barangay chairman Luna simply said that he doesn’t know why they are there,” Ramos added. 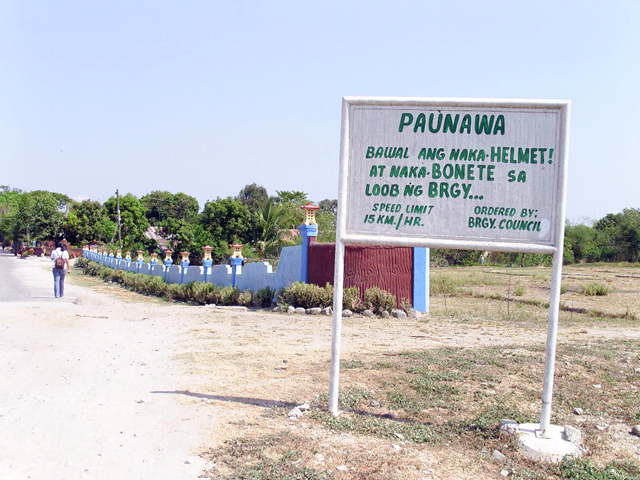 This sign posted at the entrance of barangay Lourdes, in Hacienda Luisita, can be unnerving to visitors. Locals explained that the sign was put up because of the recent killings in the area that have been blamed on assassins wearing helmet and ski masks and riding motorcycles. Several of these executions in the hacienda occurred after the November 2004 massacre of workers and farmers. (Photo by Carlos H. Conde / bulatlat.com)

The group said that leaders and members of Ambala had reported that the military was already based in eight out of 10 barangays inside the hacienda. “They are continuously conducting house-to-house (searches), looking for leaders and knowing their faces as one of the leaders from Barangay Mapalacsiao has experienced,”Ramos said.

Ambala also reported, Ramos said, that the soldiers ordered barangay security officials to report those who are non-residents and visitors of Hacienda Luisita. Students, church people and other supporters of farm workers are always being subjected to surveillance and questioning.

In June, Luisito Flores, a member of Ulwu, said in a complaint affidavit that a certain Lt. Corpuz called him on June 12 and warned him not to associate himself with partylist groups such as Bayan Muna, Anakpawis, Gabriela, Kabataan and other leftist organizations.

“It is very clear that the Cojuangco-Aquinos, with the aid of the military, continues to employ martial rule over Hacienda Luisita,” Ramos said.

He said the militarization in Hacienda Luisita is similar to the situation in 1989, during the 1989 referendum on the SDO. According to locals interviewed by Bulatlat on separate occasions, many of them were harassed and coerced into agreeing with the SDO.

Aside from the massacre in 2004 in which 14 people were killed according to workers, although investigators said they were just seven, more resident, leaders of the unions and their supporters – such as Tarlac City officials and member of the clergy – have been assassinated in Hacienda Luisita. The killings have become so common that at least one village within the estate put up a sign at the entrance of the community warning motorcyclists to not to use helmets when going inside the village. Villagers explain that assassins often use motorcycles and helmets when they kill their targets.

“The victims (of these killings) have yet to receive justice,” Ramos said. “This is the very message the military is conveying to the struggling farm workers: Resist or be killed.” (Bulatlat.com)