Baguio Vendors Vow To Block Tearing Down of Public Market

Pablito Gumnad, a vendor, said the development by private firm Uniwide of the public market is a “sell-out” and “anti-poor privatization.” Uniwide is the private contractor that won the P1.7 billion contract for the major development of the whole city public market.

The contract was earlier contested by Gumnad and other vendors groups but the court upheld its legality. The case is now pending with the Court of Appeals.

Critics of the privatization of the market claimed that some P50 million worth of “grease money” were shelled out by Uniwide for it to get the contract.

After the failed start of the public market’s development in 1997, Uniwide positioned itself as “bankrupt” and could no longer pursue the P1.7 billion market upkeep. The private developer through the years has incurred loses from its failed contract, hence it is now trying to recoup its investments in the city. 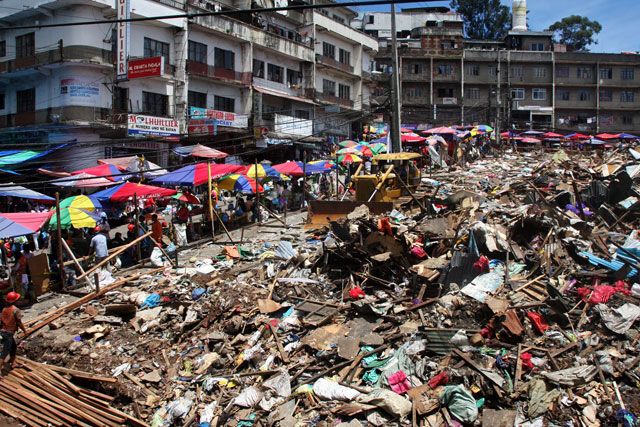 “That is the real reason behind these demolitions,” Gumnad said. “Powers-that-be are forced to give in (amidst the protests) because Uniwide might spill the beans how the controversial contract came about.”

Before Sunday’s demolition, market superintendent Policarpio Tamayo ordered vendors to vacate their stalls and remove all their products and belongings. Vendors said the order is beyond the powers of the market official.

Most of the stalls at Block 3 and 4 are made of wood, plywood, G.I. sheets while the others are concrete structures.

Clearing operations continued until Sunday afternoon to pave way for the improvement of the area. (Bulatlat.com)