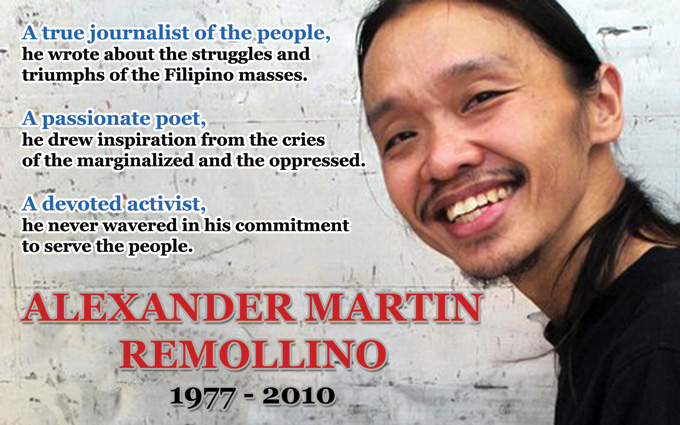 Alexander Martin Remollino was a journalist, poet and activist who devoted the best years of his life to serving the Filipino people.

During his college days at the University of Santo Tomas, Alex joined the League of Filipino Students (LFS) and participated in mass protests not only against tuition increases but also against problems confronting the public. His political activism never stopped even as he was forced to drop out of school due to financial constraints.

Zumel Center: ‘Alexander Martin Remollino Is Journalist of the People’

NDFP: ‘We Honor Alex as a True People’s Journalist and Poet’

For Alex Who Served His Muse Well (Ina Alleco Silverio)

In 2002, he worked briefly for Ibon Foundation as researcher and, later that year, started writing for Bulatlat.com, an alternative online magazine.

Alex wrote in flawless English with ease; his writing skill enabled him to write about complex issues in a language understandable to the common reader. For nearly 10 years, Alex used his talent to expose the issues of the oppressed and the marginalized. With his writing chops, he could have chosen to work for the mainstream media where he could earn a more decent income but he opted to stay with Bulatlat to pursue the progressive, pro-people journalism the website is known for.

The aspirations and the struggle of the Filipino people for genuine freedom and sovereignty, their quest for peace based on justice, the Moro and indigenous peoples’ struggle for self-determination — the mainstream media largely ignored these issues but Alex was there to consistently and passionately write about them.

“The way it is, I compare my situation as a journalist with other journalists who work in other publications: even though they receive higher wages than we, the intellectual and professional environment in Bulatlat is more satisfying,” Alex said in an interview with a blogger in 2008. Such satisfaction emanates from writing about the daily struggles of the ordinary people that most in the mainstream media often ignore.

While he also wrote for other publications to make ends meet, Alex never compromised his activist principles. In fact, he used these other venues to further inform the public about the plight of the Filipino masses.

Alex was known for being taciturn but he minced no words about issues he felt strongly about. While he seldom talked about his personal circumstances and feelings, he was very active in political discussions.

Alex used for his poetry the truths he gleaned from his journalism. Unlike other young poets who found muses from the imagined, Alex drew inspiration from the real sentiments and aspirations, agony and hope of the masses. What he would not share with friends and colleagues would end up in his poems, told more fervently, told more gracefully.

Alex left Bulatlat in February this year and went on to work for Bagong Alyansang Makabayan (Bayan). There, he used his writing skills to help Bayan amplify its positions on the burning issues of the day and even took on the task of speaking about these. Even as his health began to deteriorate — he was later diagnosed as a diabetic; his vital organs had been so severely damaged he ended up at the ICU — Alex continued to perform the tasks assigned to him. To the very end, he remained a writer for the people. To the very end, he never wavered in his commitment to serve them.

At 33, his life may have been short but what Alex did during the best years of his life will be remembered for quite sometime.