Her labor case took seven years before the DOLE issued a decision saying Wheng Hidalgo is supposed to be treated as regular employee at ABS-CBN. But instead of gaining job security, Hidalgo was moved around from graveyard to late afternoon shift, and later terminated for rejecting the company’s insulting, long-delayed regularization offer. “I cannot understand why…I gave ABS-CBN my service, love, loyalty,” Hidalgo said.

MANILA — In 2007, Gabby Lopez, the head of broadcasting giant ABS-CBN, publicly commended their reporter Wheng Hidalgo for serving as a good example of how far a “kapamilya” would go to help a “kapamilya.” During a segment of the network’s program TV Patrol, an official of the Malacañang Office for Religious Affairs was seen slamming the door in Ms Hidalgo’s face after she unearthed and reported an anomaly involving a missing money donation for a cancer patient.

Last week, though, it was the ABS-CBN that slammed its door in Hidalgo’s face, figuratively speaking, after the reporter’s seven-year complaint with the DOLE against ABS-CBN unearthed anomalies in the network’s treatment of its employees. Ms Hidalgo’s termination followed months of seeming discrimination in her work schedule as word came out that the DOLE would favorably decide on her and five other reporters’ labor case , which they filed last 2003. 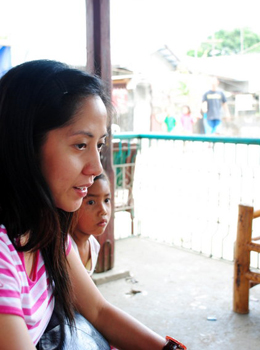 Hidalgo’s desk editors and immediate superiors had reportedly liked her work, enough to give her assignments and recommend her for regularization. (Photo courtesy of Wheng Hidalgo / bulatlat.com)

Her termination (or end of contract, from the point of view of ABS-CBN management) followed the DOLE decision saying Hidalgo is supposed to be treated as a regular employee by ABS-CBN. It turned out that despite having been with ABS-CBN for 16 years, Hidalgo is not a regular but a contractual employee. She said they sometimes work without contract. Although the DOLE decision has favored her, the ABS-CBN does not appear in the mood to follow it.

When Hidalgo’s latest six-month employment contract lapsed last August 31, the ABS-CBN management “offered” her a “regularization package” that neither recognized her 16-year tenure nor promised her the backwages and other benefits that she should have received for much of 16 years, if ABS-CBN had followed the law and recognized her as a regular employee. The so-called regularization gave her the salary rates of a starting reporter. On top of it, ABS-CBN wanted Hidalgo to drop her labor complaint.

“How could I accept that?” Hidalgo asked.

She told Bulatlat that she was even willing to forgo the backwages and retroactive benefits as long as the company at least recognized her 16-year tenure. But no, she lamented, she was treated instead like she’s privileged the company still deigned to talk to her about regularizing her after she had filed a case against it.

Ms Hidalgo’s case points to other similar employee abuses and violations of the Labor Code in the profitable network. Aside from Ms. Hidalgo, more than a hundred employees in the thousand-strong IJM (internal job market), who had been employed from five to 20 years at the company, have been terminated since June this year when they refused to drop their complaints or agree to regularizations that came with pay cuts, erased years of work history with the company, among other “lopsided” terms, as the ABS-CBN IJM Workers Union reported. Other regularizations offered this year are covered by fixed-term contracts. 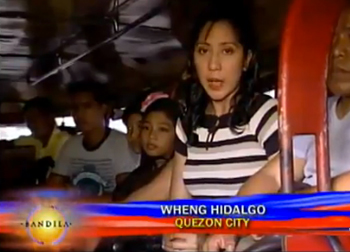 Hidalgo for instance explained that she was with IPC (intellectual property creators), which is like IJM except that the IJM workers use their skills on machines, while the IPCs are supposed to be “talents” per project or paid for their “artistic output.”

The IJM’s, IPC’s and the TS (or technical staff) – all used to be part of unionized and regularized rank and file employees– are “talents” that in ABS-CBN’s practice are not governed by the country’s eight-hour work law, mandatory vacation or sick leave. Some do not even have Pag-ibig or SSS membership.

Reporters may work eight to 16 hours a day but their pay remains the same. They get no overtime pay. If they worked overnight, then that is only the time they can offset it with a day-off, but that depends on whether the operation would not suffer with this proposed day off.