You Are Here: Home → 2010 → September → 11 → Violence and Poverty Haunt Children in Ilocos Region

VIGAN CITY — Jennybeth, 14 years old, used to question her father’s work as a human rights advocate. Her father Pastor Marcelino Mariano was one of the companions of Pastor Billy Austin when he was shot by motorcycle-riding men in November 9, 2006. Fortunately, Pastor Billy survived the incident but his family and his companions’ families were deeply traumatized.

After the incident, Pastor Marcelino received threats and intimidation from the military. Soldiers were demanding that he reveals the whereabouts of Pastor Billy who went into sanctuary after the attempt on his life. As a result, Jennybeth was in constant fear for her father’s life.

Sandy, 11 years old, is the daughter of Pastor Billy. Like Jennybeth, she did not understand her father’s involvement as a human rights advocate. When she learned about the attempt on her father’s life, she could not sleep for days. After the incident, she was easily startled. Even the barking of dogs would scare her.

Unidentified men kept watch on their house, asking neighbors about the whereabouts of Pastor Billy.

For years now, Jennybeth and Sandy have been attending activities initiated by the Children’s Rehabilitation Center (CRC)-Ilocos for children victims of human rights abuses 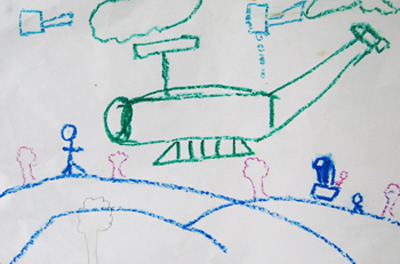 Artwork created by a child victim of aerial bombardment during a workshop initiated by the Children’s Rehabilitation Center (CRC)-Ilocos. (Photo by Joan Garcia / bulatlat.com)

In an art workshop shortly after the incident, Sandy was able to express her thoughts about her family’s situation after the attack. In her drawing, she depicted how the family’s economic burden was shouldered by her mother since her father went into sanctuary.

Through the activities launched by the CRC-Ilocos, Jennybeth and Sandy have come to understand and appreciate their fathers’ advocacy and have expressed their desire to be involved in fighting for their rights as well.

According to Rod Tajon, program staff of CRC-Ilocos, in the years 2005-2010, they have documented the following human rights violations against children in the Ilocos region: 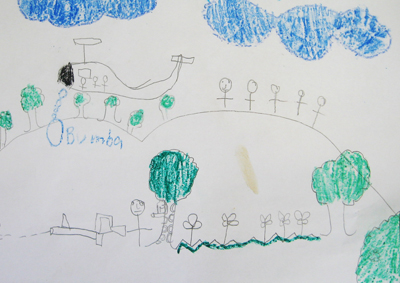 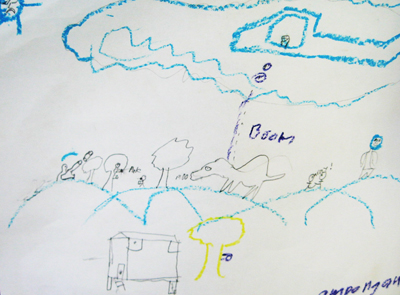 In the boundaries of Abra, Ilocos Sur and Mountain Province, children are the most affected from the aerial bombardment of the 41st and 50th IBPA in 2008 as part of the military’s counter-insurgency campaign.

Poverty, A Violation of Children’s Rights

Poverty is also a main factor in the exploitation of children. Since 90 percent of the region’s economy relies on agriculture, families suffer most from landlessness and high land rent. Meanwhile, fisherfolks suffer from intrusions of commercial fishing vessels both foreign and local depriving them of their fishing grounds.

As a result, the children are forced to work for their family’s survival. According to the National Statistics Office (NSO), in 2006, almost 11 percent of all rural children work in agriculture. Most of the time, they serve as season farm workers, especially to contract-growing areas (tobacco/corn) prevalent in the region.

Approximately 15.5 percent of children work in private establishments, especially in malls, groceries and food chains. Those who are working in multinational corporations receive a meager amount of P27-30 ($0.61 to $0.68) per hour. Only 14.1 percent of these children are permanent workers while close to 39 percent work as short-term casual workers, usually working for three-five months.

Through the activities of CRC-Ilocos, such as psychosocial therapy sessions, peace camp and art workshops, the children learn to process their fears and understand their situation. For Nikki, the activities that she has attended helped her understand her father’s advocacy and encouraged her to be involved.

According to Tajon, the task of the CRC lies in the recognition that upholding the rights of children goes beyond merely addressing their needs. “The issue of children’s rights is a political issue because the state is directly responsible for the hardships that children face this early in their lives. We must make a stand and work to change the system that exploits children and build a society wherein they are free to be themselves”, Tajon concluded. (Bulatlat.com)