You Are Here: Home → 2010 → September → 23 → No Letup in Militarization, Human-Rights Violations in Caraga Region

No Letup in Militarization, Human-Rights Violations in Caraga Region

There has been a series of four evacuations in the region since July this year. “Martial Law is still being imposed in the region.” — Genasque Enriquez, leader of Kahugpungan sa mga Lumad Organisasyon-Caraga (Kasalo).

MANILA — Joel, not his real name, went with his father to work in their abaca farm up the mountain. He ended up being tortured by the military. He is only 14 years old.

In a forum organized by the Pilgrims for Peace on Sept. 17 in Manila, Joel told his story. The boy related that on Aug. 25, he went with his father to the mountainous area of Kandiisan, sitio Palompon in barangay Mahaba, Marihatag, Surigao del Sur to work in the abaca farm. With them are farmers Elly Ambongan, Dimuel Kileste, Junry Kileste, Bryan Udtohan, Rolan Salamangca and Rymon Alameda. The next day, after taking lunch, all except Joel’s father, went back to the farm. On their way home, Joel and his companions met at least 30 soldiers belonging to the 36th Infantry Battalion of the Philippine Army (IBPA).

“The soldiers beat us up. They made us lie down then stepped on our backs with their combat boots. They exposed us to the rain and gave us spoiled food,” Joel said. The soldiers also covered their heads with plastic bags while forcing them to confess that they hid firearms. The soldiers were insisting that they are members of the New People’s Army (NPA).

The soldiers threatened Joel that they would bury him alive or drop him from a helicopter.  The interrogation went on for five hours before the victims were released. Apparently, what happened to Joel is not an isolated case. Heavy military operations in the whole region have caused the dislocation of indigenous people’s communities and resulted in numerous cases of human rights violations. 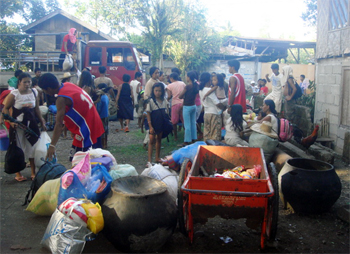 There has been a series of four evacuations in the four provinces of Caraga region since July this year. (Photo courtesy of Karapatan-Surigao del Sur / bulatlat.com)

The 36th IBPA has been stationed in barangay Mahaba since March 23. According to Karapatan, the soldiers conducted house-to-house visits and listed down the names, age and number of children of the households they visited.  They also held mass meetings and openly accused the residents of being members and supporters of the underground and rebel movement and ordered them to surrender.  The residents were also shown videos of rebel returnees and the so-called benefits of “returning to the fold of the law.” Children were offered candies in return for information about alleged New People’s Army (NPA) members.  The soldiers also conducted regular patrols around the community.

August 20, 164 families with 754 individuals, including 98 children aged 0 to 5 and seven pregnant women,  were forced to evacuate their homes to transfer to the Marihatag Municipal Gym. 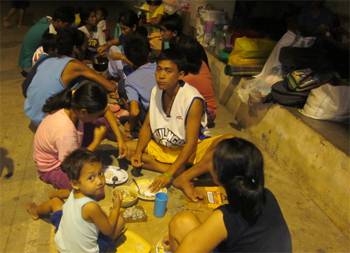 Heavy military operations in the whole region have caused the dislocation of indigenous people’s communities and resulted in numerous cases of human-rights violations. (Photo courtesy of Karapatan-Surigao del Sur / bulatlat.com)

In a dialogue held last Aug. 22, which was arranged by the local government unit, 36th IBPA Battalion Commander Lt. Col. Rene Canete and 1Lt. Serihim Temperante told the residents that they would not go near the communities and would respect the rights of civilians. On Aug. 23, the evacuees went home. However, there were more cases of human rights violations after.

On Sept. 3, more than 100 families evacuated again. On Sept. 8, another dialogue ensued. The military signed an agreement that they would no longer sleep in the houses of the residents, they would respect the rights of civilians during combat operations, and they would stop harassing and interrogating farmers. That same day, the evacuees went home.

In an interview with Bulatlat, Genasque Enriquez, leader of Kahugpungan sa mga Lumad Organisasyon-Caraga (Kasalo) said six battalions of the Philippine Army have been operating in the region. Surigao del Sur, Agusan del Norte, Agusan Sur and Surigao del Norte have been heavily militarized. Caraga is one of the priority regions of the counterinsurgency program Oplan Bantay Laya (OBL).