“Whether the Aquino government admits it or not, the massive cases of dengue mirrors a government that puts its people’s health behind debt servicing and military spending.” – Council for Health and Development.

MANILA — The Philippines remains vulnerable to the onslaught of dengue fever, regardless of the announcement of the Department of Health last week that the worst appeared to be over. Nothing substantial is in the works to truly combat dengue, according to various health groups who decried Tuesday the government’s “obvious lack of concrete measures to address the alarming increase of dengue cases in the country.”

“The DOH seems to be only counting those who died,” said Mel Yandog of Kilosbayan sa Kalunsuran (KBK), an organization of community health workers in the metro. He warned that dengue would remain a pandemic for as long as the government is not exerting meaningful efforts to stop it.

In a picket protest held in front of the offices of the Department of Health, members and officers of Council for Health and Development (CHD), a non-governmental organization providing health services to the poor, Health Alliance for Democracy (HEAD) and Alliance of Health Workers (AHW), organizations of health workers and professionals, and chapters of Kilosbayan sa Kalunsuran (KBK) from various urban poor communities in Metro Manila, dramatized the fatal consequences of the Philippine government’s lack of coherent, long-term action against dengue and other epidemics.

The health groups pointed to the Aquino government’s proposed health budget as a sign that the eradication of epidemics such as dengue would be merely reduced to “reactive and knee-jerk responses.”

“This year’s health budget of P33.678-billion ($771 million) translates to a measly P0.66 ($0.01) per Filipino per day based on the current population of 98 million,” lamented Dr. Eleanor Jara, executive director of CHD. She added that the per capita budget is not even enough to buy a dengue patient a tablet of paracetamol for fever.

In the first nine months of the year, more than 84,000 people were recorded to have suffered from dengue. Dr Jara stressed that this number, though already 117.73 percent more compared to last year, still comprised only those cases which were reported. The health groups suspect there are more. 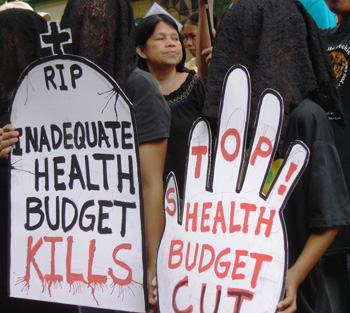 The treatment for dengue in a public hospital costs at least P7,000 ($160), said Dr. Jara. It is an amount that many Filipinos do not readily have. About 70-percent of Filipinos are reported as poor.

“Many of our people have nothing to eat, or are eating only once a day,” reported Yandog. He said as community health workers, they witness first-hand the sorry fact that too many Filipinos suffer from preventable illnesses but do not ever get a taste of professional health care or medication. They could not afford professional health care. They do not even have money for basics such as food.

Though the groups conceded that the health department seems to be trying to educate the people about dengue, they still described the department’s moves as wanting.

“There should be more studies of dengue and other diseases that periodically afflict Filipinos,” said Dr. Jara. This year, 501 Filipinos have died from dengue.

Citing the report of botanists that deforestation is partly to blame for why the dengue-carrying mosquitoes abound now in people’s communities when it used to live in forests, Dr Jara urged for more coordinated and long-term solutions, starting with the health budget, better coordination between central and local government, and improving the country’s protection of its forests, not to mention the implementation of housing programs and upgrade of the metro’s drainage system.

Health Epidemics Due To Government Irresponsibility

“Whether the Aquino government admits it or not, the massive cases of dengue mirrors a government that puts its people’s health behind debt servicing and military spending. ” – Council for Health and Development. In responding to dengue alone, the coordination of the central and local government units (LGUs) is already wanting, said Dr Jara. This lack of coordination, she said, is a direct result of the devolution of health services, a process dictated in turn by the deregulation of health care services as decreed by the 1999 Health Sector Reform Agenda.

The health groups have been criticizing this agenda and the subsequent deregulation and privatization of an increasing chunk of the country’s public health services. Before Aquino was inaugurated last June, health groups brought to his house at Times St. a list of doable health programs. They promised that if Aquino will follow even just one of the listed 10 health agenda, there will be a marked improvement in public health care.

Even though they warned that the new health secretary appointed by Aquino has a proven track record in implementing corporatization of a public hospital, a process which results in public-private partnership or another mode of privatization of public hospitals, the health groups still engaged Health Secretary Enrique Ona in a dialogue.