MANILA — It was Jean Dasa’s aunt who recruited her for work abroad. Without hesitation, she applied as household helper and was accepted. On December 2008, she left the country to work in Jordan. It was only in early 2009 that her family in the Philippines learned of the trouble she was in.

“We did not know that Jordan was banned for deployment,” Nheljean Dasa, sister of Jean, told Bulatlat. “We did not know, too, that she was only given a tourist visa when she left.”

Sometime in May 2009, Nheljean said they got a phone call from her sister, telling them her employer was beating her up and had even pointed a gun at her. She ran away and was taken under custody of her recruitment agency in Jordan. Her second employer, however, also maltreated her. So she ran away again. 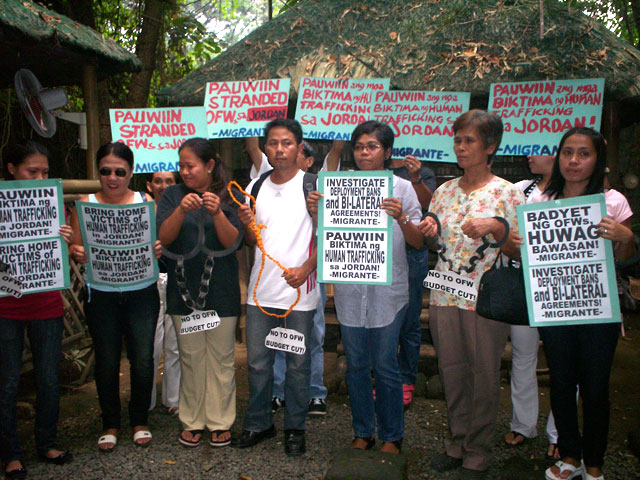 Family of victims and members of Migrante International calls for the immediate repatriation of human trafficking victims in Jordan (Photo by Janess Ann J. Ellao / Bulatlat.com)

But the harsh conditions she had to live with in the custody of the recruitment agency, for instance the insufficient food and chance to change her clothes, even, had pushed her to escape from its custody. Jean reportedly escaped by sliding down a pipe from the fifth floor of her agency’s building. This time, she went to the Philippine Overseas Labor Office – Overseas Workers Welfare Association office to seek help. Jean wanted to go home.

Going home, however, is easier said than done.

Upon arriving at POLO-OWWA office in Amman, Jordan, Jean was told she has to pay $1,000 for her deployment cost first. “This is already discounted,” Jeans was told by a Welfare Officer.

The deployment cost refers to how much the employers had spent for a Filipino migrant worker to reach Jordan. Since there is supposedly an “unexpired contract,” embassy officials or welfare officers said they have to negotiate with the agency and pay for the deployment cost.

If the recruitment agency refused it, these government offices would have to pay for it through their repatriation funds. But this often does not happen in most cases of OFWs in distress such as that of Jean.

Her family back in Philippines had to cough up the money themselves so Jeans could go home immediately. Nheljean said that they borrowed up to P28,000 ($645 at an exchange rate of $1= P43.44) from a sister working in Jordan and another P23,000 ($529) from one of their relatives. 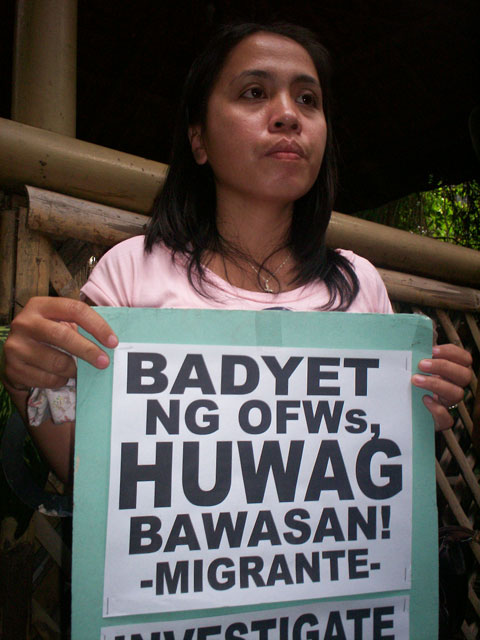 Nheljean sent the money on March 5, 2010 via money transfer. They hoped that in a few days, the family would receive a call that Jean was on her way home. But they received none.

Later on, Nheljean found out that the money they sent was not forwarded to the recruitment agency. Instead, she said that as of press time, it was still in the hands of a certain welfare officer named Carmelita Maguyon. Worse, her sister had opted to be imprisoned instead, so that she could be sent home after serving a certain period of time in prison. In that case, the family back home should not have needed those loaned money.

Now that Jean is set to arrive on Monday, October 11, “I hope we could get our money back,” Nheljean said.

In a press briefing on Saturday, October 9, Migrante International secretary general Gina Esguerra said that the Philippine government should immediately investigate how certain groups could manage to sneak some of our Filipino women for work in a banned-for-deployment country such as Jordan.

Esguerra said that while they understand that they could get past the airport officials using a tourist visa, how could the OFWs, their employers and recruitment agencies manage to have a working contracts authenticated by POLO in Jordan? These contracts, Esguerra said, were signed by OFWs upon arriving in said receiving country. 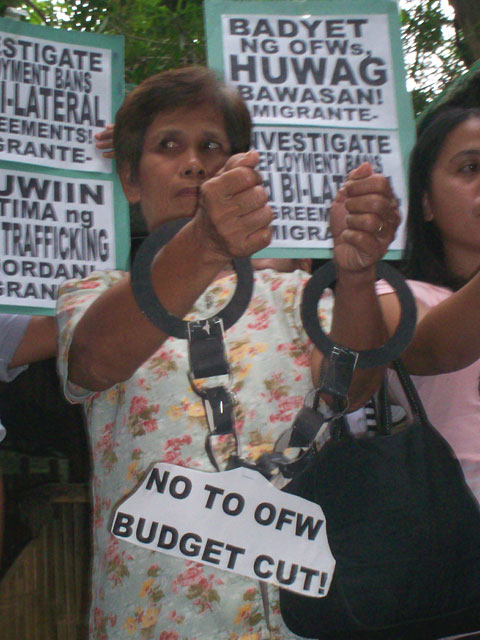 “We call on the Congress to investigate such “state-sponsored human trafficking,” Esguerra said. She also urged the congress to investigate the strict implementation of deployment bans, as well as to seek a review and evaluation of existing bilateral agreements between the Philippine government and receiving countries of OFWs.

Kins of the victims, who were present during the press briefing, urged the national government to take necessary actions to bring their loved ones home before Christmas.

Elena Jasma said that her daughter, Ma. Theresa Campos, have been staying in the Philippine embassy in Jordan for a month now. She still has an on-going case as she also ran away from her abusive employer. “I hope I can see her before Christmas,” she said.

“Life is hard in the Philippines. But the situation that some OFWs got themselves in for example in Jordan is even much harder,” Dennis Gonzales, a relative of Laila Mendez Meija, said. (Bulatlat.com)