You Are Here: Home → 2010 → October → 17 → News in Pictures: Peasants Say CARPer Root Cause of Landlessness, Poverty and Hunger

News in Pictures: Peasants Say CARPer Root Cause of Landlessness, Poverty and Hunger 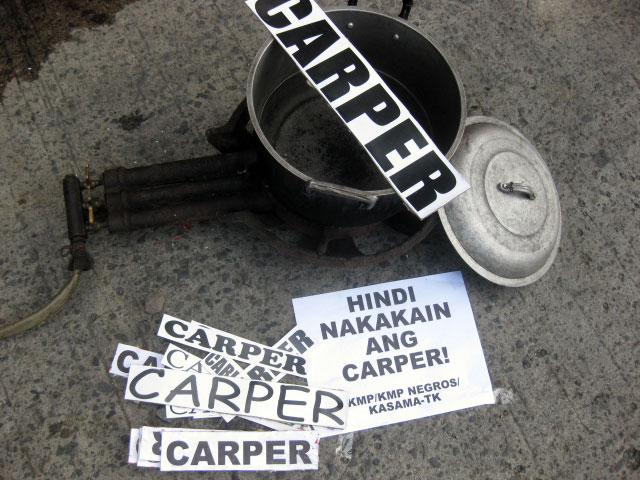 MANILA — Farmers from Negros, Southern Tagalog, Tungkong Mangga and Hacienda Luisita protested in front of the Department of Agrarian Reform office in Quezon City on Saturday, and blamed the implementation of the Comprehensive Agrarian Reform Program Extension with Reforms (CARPer) for causing massive landlessness, poverty and hunger, marking what they dubbed as World “Foodless” Day. 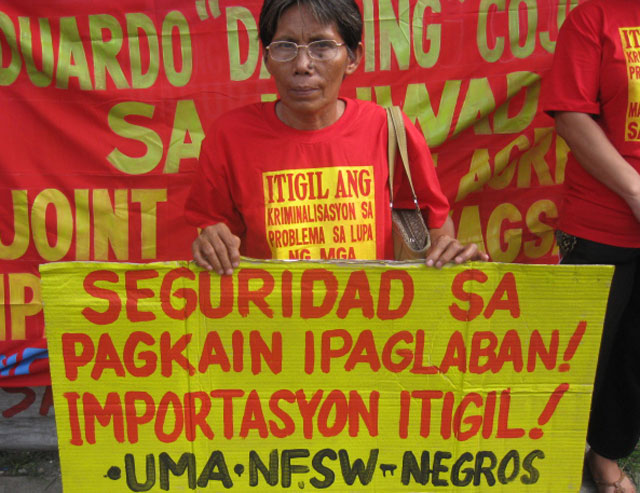 “CARPer on its more than 1 year of existence and 21 years of its predecessor CARP has never served the farmers of Southern Tagalog.  Worse, it is a convenient tool of landlords to keep their lands and throw peasants out of their farms,” Axel Pinpin, KASAMA-TK secretary-general, said.

“We farmers from Negros are major victims of CARPer, landlords are using it to criminalize agrarian cases, accusing our leaders and members of various criminal charges,” KMP-Negros spokesperson Greg Ratin said. 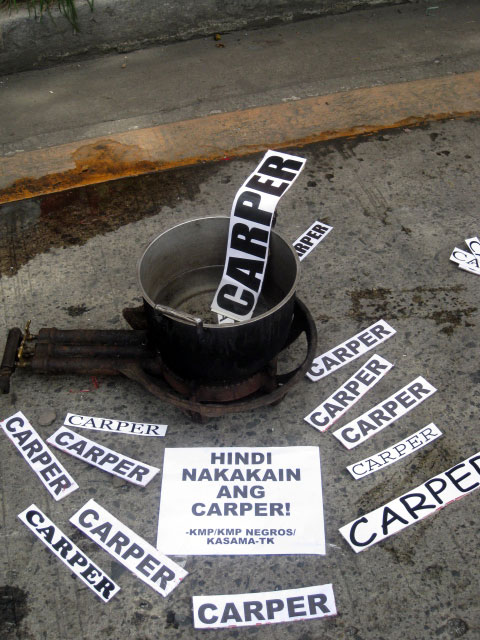 Instead of CARPer, the peasant groups are promoting the “Bungkalan” campaign, an organized effort to cultivate lands that remained idle and transformed it to highly productive agricultural lands, which is being implemented by farmworkers in Hacienda Luisita and Negros.

“Those who support CARPer should learn from the rich experience of farmers from Hacienda Luisita and Negros.  CARPer is a misnomer, it does not serve the interest of Filipino peasants, it is just a source of financial opportunism of pseudo-peasant groups, a milking cow of landlords and an instrument of foreign agro-corporations.  It should be junked and GARB should be passed in Congress,” Antonio Flores, KMP spokesman, said.

“In Negros, we were able to cultivate the lands with the massive participation of farmers who used to work on the vast sugarlands.  As the world market demand for Philippine sugar declined, mills closed down and work opportunities for the sugar farmworkers became scarce.  We have no option but to cultivate those idle and make them productive.  Now, even those not under our organization are also cultivating lands.  Landlords are now retaliating by criminalizing agrarian cases,” Ratin said. 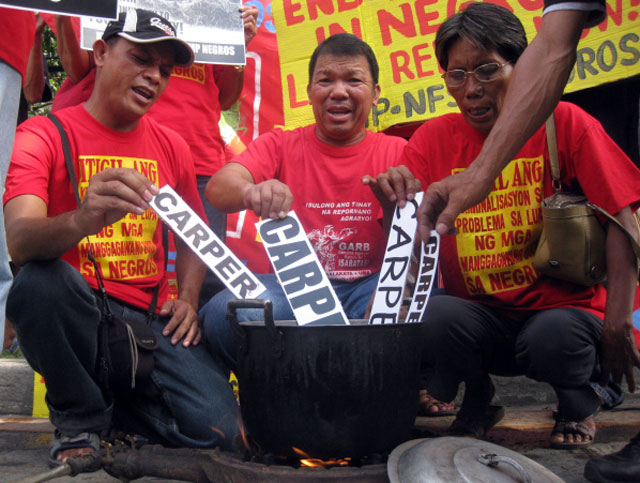 “Noynoy Aquino should contemplate as more and more farmers are protesting here in Manila against his neglect of the land issue.  He omitted it three times on his inaugural and SONA speech and first 100-day report,” Flores said. 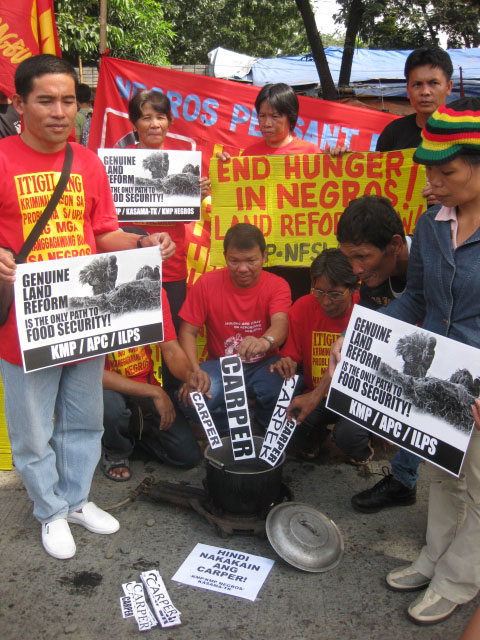 The groups then marched towards in front of the Department of Agriculture and National Food Authority warehouse along Visayas Avenue.  They protested against the continuing liberalization of agriculture and rice importation.

“Aquino should ready himself as thousands of farmers would be coming to Manila.  If he is not mentally prepared for it, he could get crazy,” Flores said. (Photos courtesy of Kilusang Magbubukid ng Pilipinas / Bulatlat.com)