The VFA, A History of Abuses

Eleven years of the Visiting Forces Agreement (VFA) has resulted in many incidents of abuses. Here are some:

On July 25, 2002, Buyong-buyong Isnijal was shot at by American solder Sgt. Reggie Lane inside his home in barangay Canas, Tuburan, Basilan. Lane was with soldiers of the 18th Infantry Battalion who were conducting military operations in the area.

“I was terrified when the American soldier, using his Armalite rifle, suddenly fired at my husband once, hitting him on the left thigh,” Juraida Isnijal, wife of Buyong-Buyong said in her affidavit.

This incident proved that US troops are engaged in actual combat operations, contrary to what the terms of agreement (TOR) of the VFA states.

On May 25, 2004, brothers Ulong Malla, Jumadil Malla and lbrhaim Malla were massacred in Barangay Sipangkot, Umapoy Island, Tawi-Tawi. Witnesses said that at least four American soldiers were involved in the raid conducted by joint RP-US military and police elements;

On June 21, 2004, Arsid Baharon was shot at by an American soldier, whose identity US authorities have withheld, in Barangay San Roque, Zamboanga City while crossing an area which has been turned into a firing range for joint RP-US military exercises. To avoid any charges, the US soldiers paid Baharon’s family P50,000 ($893 based on the June 2004 exchange rate of $1=P55.98). 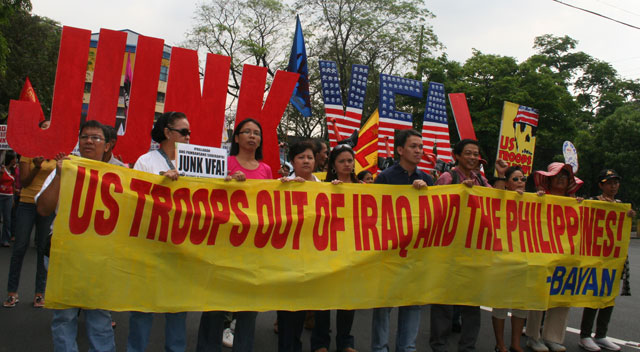 On Feb. 4, 2008, US troops were sighted in an assault that killed eight civilians in barangay (village) Ipil, Maimbung, Sulu. Survivor Sandrawina Wahid attested seeing four US soldiers in the company of the Philippine Navy and Army elite forces that stormed their village.

In March 2000, taxi driver Marcelo Batestil was mauled by three US servicemen in Cebu.

On Nov. 1, 2005, Nicole (not her real name) was raped by Lance Corporal Daniel Smith while three other US soldiers Lance Corporal Dominic Duplantis, Keith Silkwood and Staff Sergeant Chad Carpentier cheered on. Smith was convicted by Philippine courts for the rape but was spirited from his prison cell in Makati City by American authorities with the acquiescence of the Philippine government and transferred to the custody of the US embassy, in violation of the Constitution and various laws. The Court of Appeals later reversed the lower court’s ruling, and Smith was eventually repatriated to the US.?

On May 14, 2009, a 22-year old college student Vanessa said a US Marine raped her inside a room at a five-star hotel in Makati City on April 19.

On Feb. 2, 2010, Gregan Cardeño was killed inside the US troops’ barracks in Camp Ranao, Marawi City. While authorities ruled that it was a suicide, the victim’s family said the circumstances before his death revealed otherwise. (Bulatlat.com)