For the third time, the Association for the Rights of Children in South East Asia (ARCSEA), an organization advocating for the rights of children here in Manila is sending young people from urban poor communities to perform in different cities in Tuscany, Italy for an annual event tagged as “Il cuore sis cogle” (Melting hearts).

According to Madella Santiago, the executive director of ARCSEA, Melting Hearts is an annual fund-raising campaign of their Italian partners that support cause-oriented organizations from third world countries such as the Philippines. Aside from ARCSEA, organizations from India, Peru, Burkina Faso and the Palestine are also invited.

However, “only the Filipino delegation is requested to perform,” said Santiago. The other delegations would only discuss their projects and activities.

Santiago said last year’s theatrical dance drama performed by Filipino youth portrayed children in armed conflict. The audience composed of students, teachers, professionals and members of different organizations in Italy were teary-eyed and awed by how effective the performers were, according to Santiago.

“Because of that, they requested that we come up with more performances for this year to be done simultaneously in different venues,” Santiago said.

The kids who perform Philippine social realities are chosen from the organizations in urban poor communities that are beneficiaries of ARCSEA projects.

This year, Adi Premian ,17, Donita Eso, 16 and Nicole Patigdas, 12, are performing solo pieces from the third week up to the last week of November. Except for Donita, Adi and Nicole were part of last year’s Filipino delegation. 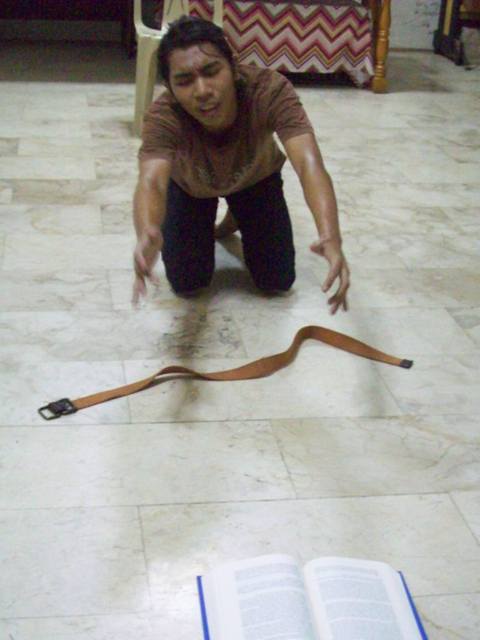 For this year, Edwin Quinsayas who also directed previous Melting hearts performances opted for dance monologues, a relatively new form of performance which mixes together contemporary dance movements and monologue in one performance piece.

“All of the three solo performances are inspired by true stories of children,” Quinsayas said.

Quinsayas added that before the performance pieces were conceptualized and written, the three underwent dance and acting workshops and story conferences. The workshops were necessary “to equip them with enough skills and understanding of the characters they would be portraying,” said Quinsayas.

At the technical- dress rehearsal last November 10, each of the three dance monologues were performed in front of an audience of around 20 advocates of women’s and children’s rights.

The first dance monologue, entitled Sinturon (belt) performed by Adi is the story of Ambet, a peasant boy whose parents were forced to give him away to their landlord as payment for their debt. Ambet experienced violence and forced labor while dreaming of pursuing his studies. 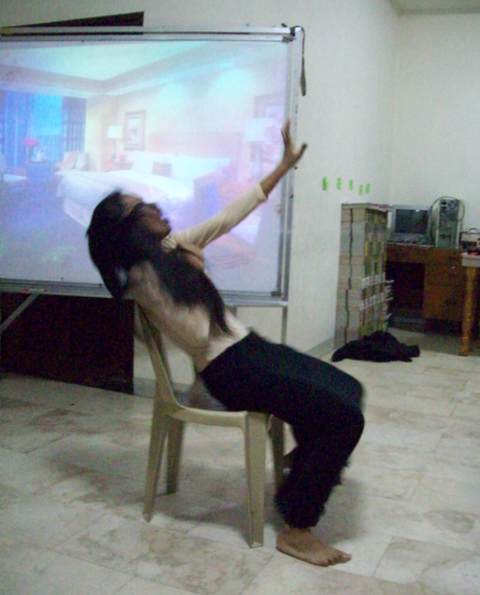 With Adi’s inspired performance, most in the audience were in tears especially in the end when Ambet reached for his book and embraced it but all was too late. He closed his book, took the belt, stood on the chair and hanged himself. It was inspired by the story of Mariannet Amper, the 12-year old girl from Mindanao who hanged herself because of extreme poverty in November 2007.

For her part, Donita’s solo entitled “Manika” (doll) tells about the story of Cherry, a girl who sells flowers in the streets of Olongapo City, who was lured by the kindness of Joe, an American soldier who gave her a doll and brought her to a hotel room.

However, like Donita’s face whose smiles, even at the start of the performance, gave hints of something dark coming – with Jimi Hendrix’ s classic Hey Joe playing on the background – the audience faced the truth- the kind-hearted American was actually a monster and on the video wall flashed, “in memory of Rosario Baluyot”.

Baluyot is the 12-year old girl from Olongapo city who was raped by an Austrian national in 1986 and died of infection because of a foreign object left inside her genitals by her rapist. The Austrian was convicted but was later acquitted by the Supreme Court. An American soldier was also suspected of being involved in the rape.

Finally, Nicole performed “Rosaryo” , about a prayerful girl whose parents were killed by what she calls “monsters.” Set in a wake, the performance opens with Rosaryo holding a rosary as she introduces herself and recalls how her parents were killed one fateful night, through dance sequences and short lines.

Described by Quinsayas as a great thespian in the making, Nicole made most of the people from the audience cry, as she powerfully portrayed a girl wretched by the death of her parents. 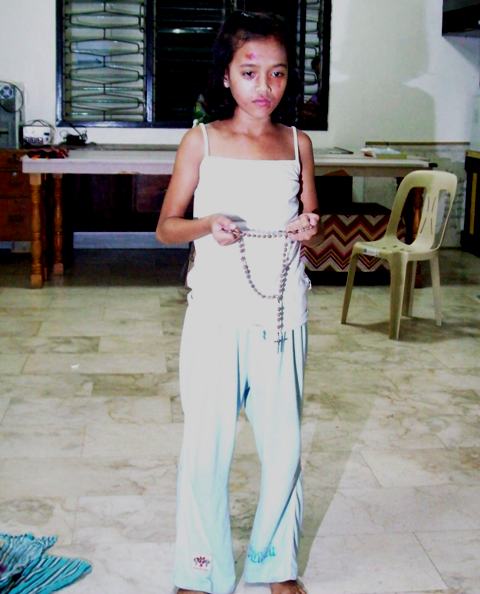 Nicole awes the audience with her performance as Rosario, a girl killed by soldiers. (Photo by Terence Krishna Lopez/ bulatlat.com)

But no, the story did not end when Rosaryo found out that her parents were already dead and the rosary she was holding was no longer of help. The story ends when Rosaryo herself was killed by the monsters whom she then named as government military troops.

And then she rolled back in a fetal position and stood at the same point where she was standing in the opening. Yes, it was her wake that the audience was witnessing in the opening of the performance.

Rosaryo was inspired by the story of Grecil Buya, the nine-year old girl who was killed by the military in 2007. Instead of owning up to their crime, the military accused Grecil of being a child rebel.