“The activities are meant to enhance public awareness on the Ampatuan massacre and on impunity,” CMFR deputy director and former dean of the UP-CMC Luis Teodoro said in a press conference Nov. 16.

MANILA — Various media organizations have geared up to mark the first anniversary of the Ampatuan massacre on Nov. 23.

On Nov. 23, 2009, 57 persons, including the wife and relatives of Toto Mangudadatu, the political rival of the Ampatuan clan, were killed allegedly by the private army of the Ampatuan clan in Ampatuan town, Maguindanao. Thirty-one journalists were among the dead and one of them remains missing.

The November 23 Movement , a loose coalition of media groups calling for justice for victims, the National Union of Journalists of the Philippines (NUJP),the Center for Media Freedom and Responsibility and the University of the Philippines College of Mass Communication (UP-CMC) have lined up activities leading to the Ampatuan massacre’s first anniversary.

On the day itself, relatives of victims and journalists would have a motorcade from General Santos to the massacre site in sitio (subvillage) Masalay, barangay (village) Salman, Ampatuan town. An interfaith ceremony would be held. Fifty-eight trees would also be planted.

In Manila, the highlight of the commemoration would be a torch parade toward the foot of Chino Roces (formerly Mendiola) bridge, a few steps away from Malacanang palace. Delegates of the International Federation of Journalists (IFJ), Southeast Asian Press Alliance (SEAPA) and other international media groups would join the protest.

CMFR who heads the secretariat, brought the meeting of the SEAPA in Manila to keep the Ampatuan massacre alive in the minds of foreign journalists, particularly those in Southeast Asia. Participants to the Journalism Asia, an annual publication, would also join the protest on Nov. 23.

“The activities are meant to enhance public awareness on the Ampatuan massacre and on impunity,” CMFR deputy director and former dean of the UP-CMC Luis Teodoro said in a press conference Nov. 16. 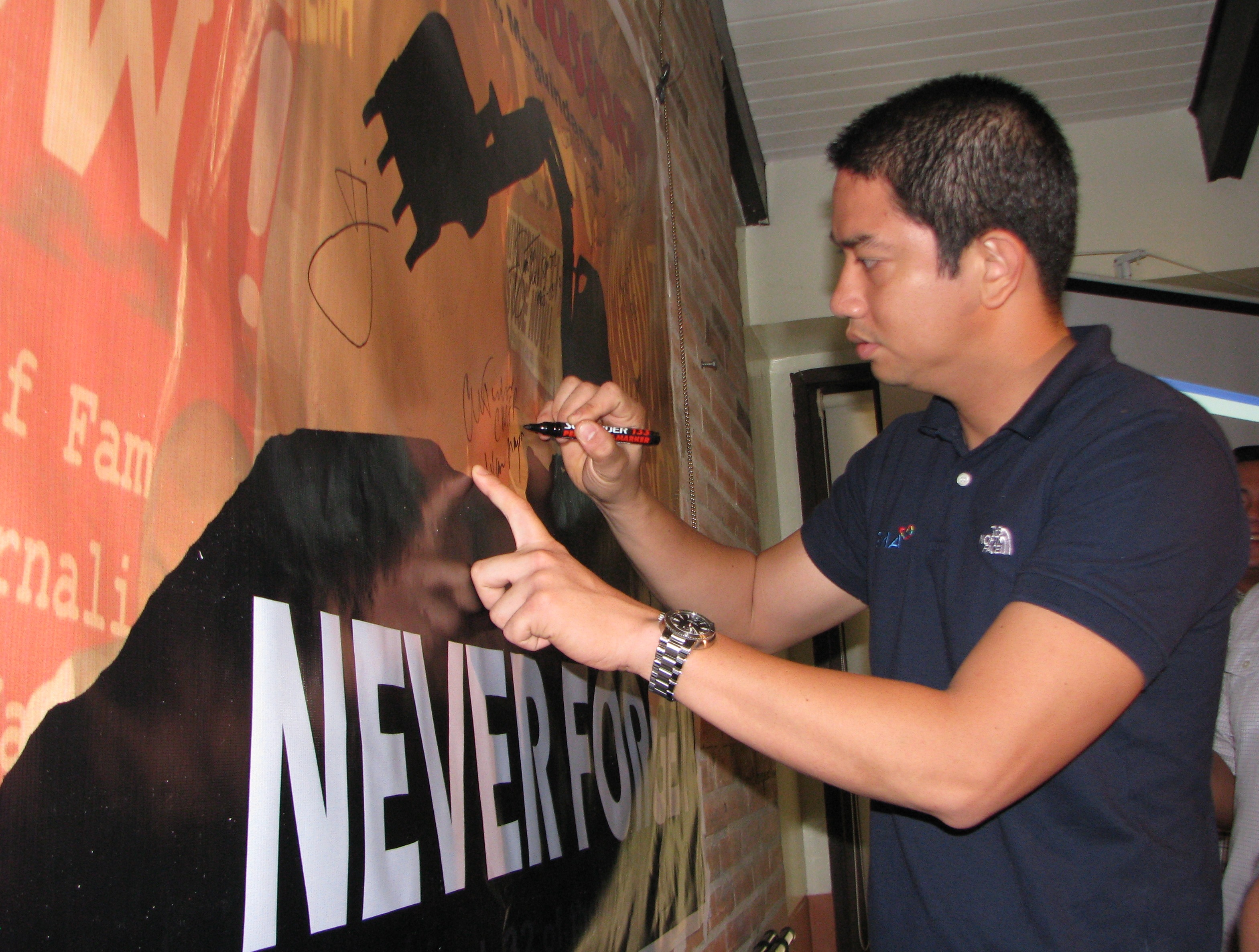 Meanwhile, members of the UP-CMC community would unveil a marker dubbed “Pananda ng Pag-alala at Paglaban,” according to Danilo Arao, UP journalism professor. “The struggle against the culture of impunity that persists in Philippine society should continue,” Arao said.

The UP’s Carillon would play “Bayan Ko” 58 times, corresponding to the number of victims, as a reminder of the tragedy, Arao added. After a march around the oval and a short program at the Quezon Hall, members of the UP CMC would join journalists and other sectors in the march protest.

Alwyn Alburo, NUJP deputy secretary general, presented three versions of public service advertisements (PSA) on the Amptuan massacre. Written by Veronica Uy and directed by Jim Libiran, the first PSA features relatives of victims of Ampatuan massacre. Journalists and other personalities are featured in the second one (in English and Filipino versions), directed by TJ Besa and written by Alburo and Sonny Fernandez, NUJP secretary general. Nap Jamir was the director of photography for the two PSAs.

Inday Espina-Varona, former NUJP chairwoman, said the public service advertisements would convey that ‘the struggle for press freedom is not only for journalists but for all sectors of Philippine society.

The November 23 Movement and the NUJP have also called on the public to bring the campaign for justice online. Subscribers of social networking sites are encouraged to change their profile pictures to the icon of the Ampatuan massacre.

Three forums have also been organized in commemoration of the Ampatuan massacre. Other activities include a benefit concert and a photo exhibit. (Bulatlat.com)