MANILA — Supporters of the detained 43 health workers, collectively known as Morong 43, trooped to Camp Bagong Diwa in Bicutan, Taguig, today to call for the immediate release of the health workers, who are now on their second day of hunger strike. 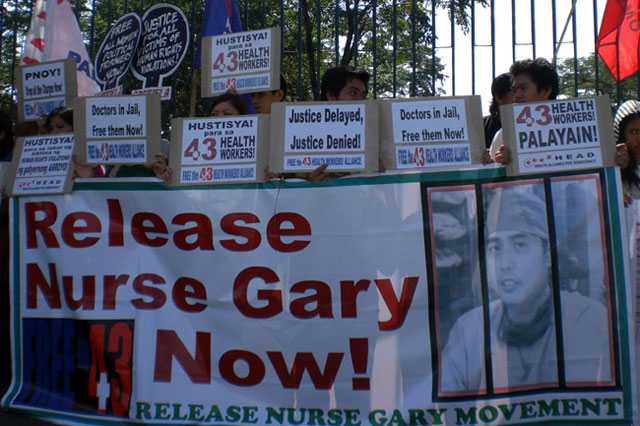 Rev. Benoni Silvanetto of the UTS said that Aquino’s inaction to free the Morong 43 is an indication of his lack of sensitivity and injustice. “It is wrong to detain persons like the 43 health workers due to lack of judgment,” Silvanetto said, referring to the continued detention of the health workers despite the lack of evidence against them.

The 43 health workers were arrested on February 6 in Morong, Rizal, while conducting a health skills training. They were slapped with charges of illegal possession of firearms and explosives.

The Samahan ng mga Ex-Detainees Laban sa Detensyon at Aresto (SELDA) refer to the hunger strike as a “strong political statement of strength and unity amid efforts of the Aquino government to impede the release of the Morong 43 and all political prisoners in the country.”

Obet De Castro, campaign officer of Karapatan, said the hunger strike is historical for two reasons. First, it was the second biggest hunger strike done by political prisoners nationwide since the early 90’s during the administration of former president Fidel V. Ramos, where at least 40 political prisoners were released. Second, it was done on the month when human rights day is commemorated around the world.

De Castro said political prisoners in Tagbilaran in Bohol, Dumaguete in Negors Oriental and Mandaue and Rapu-Rapu in Cebu, also started with their hunger strikes.

Emma Manuel of AHW said that ten months of detention is more than enough. “It is not only their relatives that need them the most but also the marginalized people especially those who live in the country side who they render their service.” 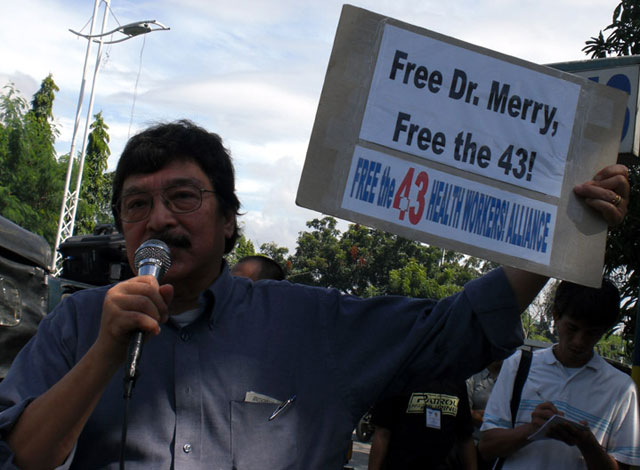 Roneo Clamor, acting secretary-general of Karapatan and husband of detainee Dr. Merry Mia-Clamor, said they have done numerous protest actions for the release of the heath workers but the government remained deaf. “I even had an an opportunity to have an oral intervention in the 14th Session of United Nations Human Rights Council last June this year, but to no avail.”

Relatives of the health workers also had a dialogue with Malacanang, but were not given concrete answers about the release of the Morong 43. “Officials from Malacanang have been asking for the hunger strike to stop. But the health workers, the relatives and the supporters, will still continue with the hunger strike not until they give us a concrete action on the case of the Morong 43.”