VIGAN CITY, Ilocos Sur — As a third year Tourism student at the University of Northern Philippines (UNP), Tracy Lee Galang has a lot of school-related expenses. Aside from the on-the-job trainings, she and her classmates have to travel to different places as part of their academic requirements. Tracy said despite the large amount of money needed for her course, she manages to continue her studies because tuition at UNP is relatively low compared to other schools.

However, with the looming budget cut for State Universities and Colleges (SUCs), Tracy fears that the tuition might increase to make up for the insufficient funds of her university. Currently, the tuition per unit at UNP is P100 (approximately US $2.29 based on exchange rate of 1 USD = P43.57).

Tracy said most of the students of UNP are not rich and there are already students who have been forced to shift to vocational courses since they could not afford the P3,000 to P5,000 ($68.85 to $114.76) tuition each semester. “Worse, there are students who became out-of-school youth, who were forced to work for meager salary because they do not have the ample amount needed to sustain their schooling,” Tracy said. 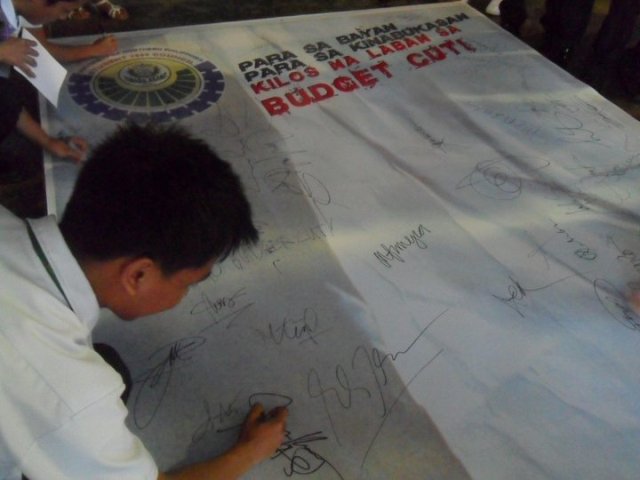 A student signs up against education budget cut. (Photo by Joan Garcia / bulatlat.com)

Last December 1, as Senate was set to approve the 2011 budget, the students, faculty, employees and administration members of UNP held a protest action at the university gymnasium to protest the budget cut on SUCs. At least 2,000 members of the UNP community gathered at the gymnasium and showed their united stand against the budget cut in SUCs.

“Today, we gather as one to make a strong voice in opposing the threat of stealing the youth’s future from us. We are one with our school administration, teachers, school personnel and fellow students in fighting for our right to education,” Mejia said.

In the manifesto read by Pajarillo, he expressed the UNP Community’s “disappointment and disbelief upon learning of this latest injustice-from no less than an administration that vowed to place education and the youth in its highest priority.”

Not only did the manifesto express their outrage against the budget cut in education, it also questioned the P104.7 billion budget of the Department of National Defense (DND), the additional P10 billion and P6.6 billion of the Armed Forces of the Philippines (AFP) and the Philippine National Police, respectively, the P24.8 billion pork barrel funds and lump sum fund allotted for the ‘public-private partnership support”.

According to Tacbas, since 2001, the UNP has not received any budget from the government for the building of infrastructures. Tacbas, also chairman of the Philippine Association of State Colleges and Universities (PASUC), explained that he has been to Congress to attend the budget deliberations and has talked with legislators to seek support for higher state subsidy for SUCs.

Tacbas said he was able to talk to Kabataan Partylist Representative Raymond Palatino to express his support for the student-initiated strikes against the budget cut and has committed that the UNP would also hold a protest action.

During the activity, Tacbas was able to get an update from Dr. Dante Guevarra, president of the Polytechnic University of the Philippines (PUP) saying that the Senate gave an additional P146 million to the budget of SUCs. This generated cheers from the students and faculty members.

Tacbas finished his talk with an assurance to the students that if the budget cut unfortunately continues, there would be no increase in tuition. “As long as I am around as PASUC president, I would not tolerate an increase in fees. It must be the last resort,” Tacbas said.

However, the fight for higher state subsidy for education continues. “The youth takes pride in our victory to have clinched an additional budget of P146 million for SUCs because of our vigilance through the continuous protest actions we have launched in the past weeks. However, it is clear to us that the amount is still way below what has been taken from us; the massive budget cuts have not been covered-up by this addition. We shall continue to mobilize the widest number of students, faculty, administration staff, and other school personnel to continue our fight for higher state subsidy,” Mejia said.