‘It’s Not Too Much to Demand Justice, to Demand Land for the Landless’

The casualties would without doubt have been more if all the bullets the military and police fired that day were real. It was found out later that they used rubber and plastic bullets, and though these were not fatal, they were enough to raise bruises that would hurt for days after.

By the time they reached Lawton, Nanay Tess thought she would collapse. All that kept her going was her determination to take her mother to safety and to return to her children. Her tears kept flowing as she worried for Danilo and the others, but there was nothing else to be done. The jeepney their farmers’ group rented immediately left bearing Nanay Tess, the owner and a few others. Its driver thought it wiser to leave without waiting for the others because he saw that the police were still running after the survivors and arresting them.

Safe at home in Pagsanjan, the news trickled in: Danilo had been killed. Members of the KMP hastened to comfort Nanay Tess and her children, and Danilo’s remains were taken to Mt. Carmel Church in Quezon City along with the bodies of the other victims of the massacre.

The Aquino government extended no assistance, expressed no sympathy. Not a single flower to the Arjona family and not once in the 24 years that have passed has Nanay Tess forgotten.

“We survived because of the KMP’s help, because the Kilusan gave us succor. I was forced to leave the land my husband and I tilled as tenants because I could no longer take care of it. We had five young children, the eldest was only 12, the youngest five. I had to find other means to secure our survival,” she says.

She has since worked as a washerwoman, a bean picker, and as a rice field worker during harvest season. Her earnings were never enough, and only one of her and Danilo’s children was able to finish high school. It has been a hard life, but not once did she blame the KMP or the mass movement for what happened. 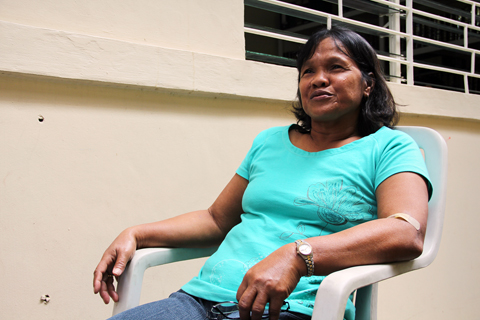 Teresita Arjona: “I did not expect the government to help us, but I did expect that it would bring justice for those who were killed.” (Photo by Jo A. Santos / bulatlat.com)

Through the years she continued to join peasant group activities led by KMP and its formations in Southern Tagalog. She lost touch in 2009 and 2010, however, but earlier this month, she saw a jeepney in Laguna with a KMP sign on it, as well as a sticker proclaiming the just and righteous struggle for genuine agrarian reform. Nanay Tess was overjoyed, and she waited for someone to come. KMP deputy secretary general Willy Marbella arrived — the KMP had been visiting the community — and he secured Nanay Tess’s promise to join the activities commemorating the 24th anniversary of the massacre.

Nanay Tess is now 52 years old, and on Saturday, January 22, she lit a candle for her husband and for the 12 others who were killed in Mendiola.

“I did not expect the government to help us, but I did expect that it would bring justice for those who were killed. Nothing like this happened. Now it’s Noynoy Aquino who is president. We can only hope that he will be able to do what his mother failed to do. Those who shot and killed my husband and the others, those who ordered the police and the military to begin shooting, they have all gotten away without punishment. I don’t think it’s too much to ask that he right the wrongs his mother’s government committed against the farmers. It’s not too much to demand justice, the same way that it’s not too much to demand that those who till the land should own it.”