‘Life for Farmers Is Meaningless If They Are Deprived of Land’

Mendiola Massacre survivor Pedro Gonzalez knows by heart the crimes the governments that followed the Marcos dictatorship committed against the Filipino people. These, he says, make him remember what he is fighting for.

MANILA — It may have been 24 years ago, but for the survivors of the brutal Mendiola Massacre that left 13 farmers dead and many others hurt, the wounds still bleed.

Pedro “Tata Pido” Gonzalez was only 23-years-old when the supposedly “revolutionary” government of Corazon Aquino first unsheathed its sword against Filipino farmers in Mendiola. It was only his second time in Manila, but being a part-time municipal organizer of the militant youth organization Kabataang Makabayan (KM or Patriotic Youth) since 1970, Tata Pido was not new to protests.

He had already been helping organize fellow fisherfolk against unfair sharing practices of owners of large-scale commercial fishing enterprises. In his first rally in Manila, he stood alongside other farmers , fisherfolk and other members of progressive sectors in front of the US embassy on Roxas Boulevard to denounce Uncle Sam’s relentless interference in Philippine economic and political affairs.

“The police lobbed teargas canisters at us and we ran willy-nilly all over Luneta,” he said, smiling at the recollection.

When asked about his experience in Mendiola on January 22, 1987, however, he grew serious, and one could see in his eyes how the memory of what happened that day still affected him. 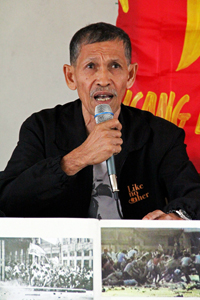 Tata Pido during a press conference called by the KMP on Friday to mark the 24th anniversary of the masscre. (Photo by Jo A. Santos / bulatlat.com)

“I was somewhere in the back of the rally. There were so many of us, but the protest was well organized. We were tired from the three-day vigil in front of the then Ministry of Agrarian Reform, but all exhaustion vanished as we marched closer to Malacañang. We bore with us very legitimate demands, and we wanted to remind Mrs. Aquino of the promises she had made to give land to the landless.”

Tata Pido said farmers groups led by the Kilusang Magbubukid ng Pilipinas (KMP) had concrete and unassailable reasons for proceeding to Mendiola that day. In June 1986, a few months after Aquino was propelled to the presidency after the EDSA uprising that rid the country of the dictator Ferdinand Marcos, the KMP held a national council meeting to finalize an agenda on genuine agrarian reform. With this in hand, 10 of its leaders went to Malacanang where they were warmly welcomed by Aquino and her executive secretary, Joker Arroyo.

“The feedback from the meeting was that Mrs. Aquino was elated over the proposal. She said the KMP’s blueprint for genuine agrarian reform was worth implementing, that it could would serve well as the cornerstone for her administration and its goals,” he said.

But by September, nothing was heard from Malacañang. No announcements were made about distributing land to the farmers, or even just the provision of immediate subsidies to help farmers in the interim. It was then that the KMP decided to hold a protest.

(KMP spokeman Antonio Flores, in a press conference this week, said that farmers wanted to test the waters, to see how sincere the Aquino government was. The farmers went to the MAR, but then secretary Heherson Alvarez all but went into hiding. Alvarez did not show his face in the ministry for three days, and the farmers were left to speak to the employees and explain why it was that they were there — to press for action on their call for land reform. Some farmers pulled down the Philippine flag from its pedestal in front of the department building and hoisted aloft the KMP’s own red banner.)

“So we marched. Those in front were almost in Mendiola, while the rest of us including myself where still in Morayta. Word reached us that there were so many police, Marines, soldiers, you name it, in the area but I didn’t feel afraid. What was there to worry about when we had already talked to Mrs. Aquino about our demands? As for our ranks, we were unarmed. We had nothing but flags, streamers, the carton plackards mounted on bamboo sticks.”

“Suddenly I heard shots. I didn’t know at first that they were gunshots; it sounded more like clapping. First it was intermittent, then soon the sound was loud and deafening. There was chaos, everyone began running away from the sound of gunfire. Men, women, children were running. Yes, there were children with us that day. I also ran, and I am a little ashamed even now to admit that I failed to help those whom I saw fall on the pavement. It was all I could do to keep from falling myself.” 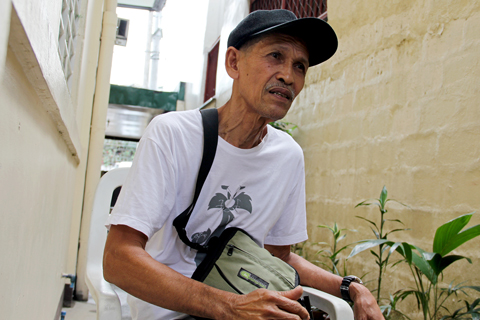 Tata Pido: “We bore with us very legitimate demands.” (Photo by Jo A. Santos / bulatlat.com)

Tata Pido lost his slippers as he ran, and as he reached the corner of Morayta and España Avenue, the traffic was at a standstill. A jeepney stopped in front of him and the driver yelled at him to jump into the vehicle.

“I was breathing hard, I was more than a little confused, but I was able to tell him that I needed to get to Divisoria where the bus terminals were. I was relieved, when I put a hand inside my pocket, to find that I still had enough money for fare.”

Back then, it cost only P2.50 to ride a bus from Quezon to Manila and vice-versa.

When he got home, he found out that what happened in Mendiola was everywhere in the news. His wife all but berated him for joining the protest where he could have lost his life. His wife was also a member of the peasant group, but in her fear , she told him to stop his political activism,

“I learned an important lesson that day: it’s important that we make sure that our wives, our partners are encouraged to develop politically.”

So now, 24 years later, Tata Pido continues to join protest rallies, demand justice for the victims of Mendiola Massacre, and to continue the peasant struggle for land. He remembers the events that led to the massacre the same way he cannot forgot how, in the 2004 elections where he ran for provincial board member of Quezon, he was shot nine times by members of the military and left for dead.

The lines on his face, the way his skin has become rough with age and years of toil, are as familiar to him as the aspirations of all farmers and fisherfolk for uncompromising, genuine agrarian reform. He knows by heart the crimes the governments that followed the Marcos dictatorship committed against the Filipino people. These, he says, make him remember what he is fighting for.