Noynoy as Inquirer’s ‘Filipino of the Year’? WTF?

MANILA — I must admit that after reading the Philippine Daily Inquirer’s headline “Filipino of the Year: Aquino Rocks,” my initial reaction was, “What the f—k?!” But  I told myself to read the story first. The country’s leading newspaper might just surprise me.

I had not even finished reading the first paragraph when disgust set in.

Because most Filipinos still believe his famous and thrilling declaration (“Kayo ang boss ko!”) that has all the ingredients of an anthem-like refrain, because many people feel he belongs to them and is within their reach (maybe because he is not perfect but appears intent on doing the best that he can, like most hopeful citizens who are the wellspring of his political power), the Inquirer voted Benigno Simeon Cojuangco Aquino III “the living Filipino who made the most positive impact in 2010.”

President Benigno S. Aquino III’s declaration “Kayo ang boss ko!” is not at all true in many respects. When I heard him say that, it reminded me of then President Joseph Estrada saying “Walang kamag-a-mag-anak. Walang kaibi-kaibigan.”

Aquino’s supposed reluctance to run for the presidency was an impression he tried hard to cultivate.

He prayed, and prayed again, each time announcing without embarrassment that that was what he was doing [running for office]. And then, for one last time, he prayed some more before throwing himself into the virtual arena.

I have no right to doubt his faith in God as it is too personal but pious leaders do not amaze me. President Gloria Macapagal-Arroyo, for one, said she had sought God’s guidance before declaring she would run in 2004, no matter that, before that, she had vowed she wouldn’t.  Leaders who say they pray do not necessarily mean they would do something good. 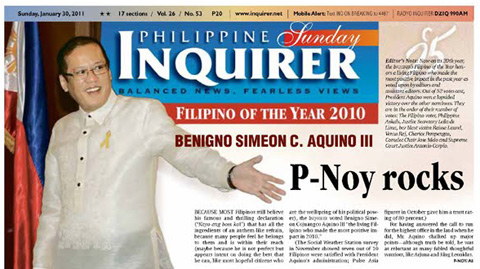 Then the Inquirer article went on to cite tragedies that happened under Aquino’s presidency. But did these make him shine? Quite the opposite. Let us cite one incident, the hostage crisis in August. If anything, it illustrated the ineptness of his administration. After instructing Justice Secretary Leila de Lima to study the incident and issue recommendations, Aquino did not heed these and did not fire certain Cabinet members for their criminal neglect of duty.

The Inquirer mentioned that Aquino implemented “quickly doable reforms” that, its editors argued, endeared the president to the masses. The ban on the use of “wang-wang” is appealing mostly to the middle and upper classes who own cars.

The lunch at a hotdog stand in New York was intended a PR gimmick. The editors did not mention that the Aquino government had spent US$15,000 (roughly P657,000) just to hire the services of PR firm Kreab Gavin Anderson on his first trip to the US after becoming president.

Stopping the practice of politicians who stamp their names on government projects is good but this and all the other so-called reforms cited have not provided immediate relief for the poor. Why has he not certified as urgent the bill seeking to increase wage? Why has he not put a stop to the hikes in LRT and MRT fares instead of appearing to be helpless on this issue?

The Inquirer credited Aquino for the $434-million grant from US government’s Millennium Challenge Corp. (MCC). It failed to mention that there are, of course, strings attached. According to independent think tank Ibon Foundation, the MCC requires indicators for trade policy, inflation and fiscal policy that are no different from the discredited “structural adjustment programs” of the World Bank and “stabilization programs” of the International Monetary Fund (IMF) in the past decades. These conditions seek to “completely open up the economy to foreign capital at the expense of real domestic development, and to promote fiscal austerity to be able to keep repaying debt. These policies are designed to benefit mainly US commercial and strategic interests and not the development or poverty reduction in the country. Moreover, the MCC indicators are inconsistent with real asset and wealth redistribution in the domestic economy,” Ibon Foundation pointed out.

Aquino has always vacillated on the issue of birth control and reproductive rights.

The rave about him being a music aficionado and the tales on his lovelife should have been reserved for the entertainment section of the paper and not as part of the reasons why he is, to them, “The Filipino of the Year.”

While the Inquirer sees nothing wrong with Aquino buying a Porsche in a time of hardships for the poor, an urban-poor leader thinks otherwise, comparing him to a father who ate an entire roasted chicken for himself while his children are starving.

I could imagine the faces of colleagues at the Inquirer grimacing at their paper’s choice for “Filipino of the Year.” I am quite sure that if they, the reporters and correspondents who are out there in the field getting the news and dealing with ordinary people, were included in the voting, the result would be different.