Neither would admit as to when exactly one began to feel differently about the other. Perhaps it was because they were still ordained members of the religious at the time, but more likely because neither knew what they were feeling.

“All I can say is that I was comfortable with him, and it felt happy to work with him, beside him. Aba’y malay ko ba kung ano yang romantic love na yan!” Coni said, laughing.

Louie, for his part, said that he had begun feeling happy whenever he saw Coni, and he knew instinctively that it was a different sort of feeling from the kind he experienced whenever he was with other friends.

“Coni had a strong personality, and she carried it with grace and warmth that people around her never failed to be gravitate toward her. I think that was what first attracted me to her — she was always full of energy and kindness toward everyone around her,” he said.

In any case, everything became more or less apparent during a short break the SAC staff had. Louie, Coni and the students went to Alcala beach in Punta Taytay, a village in Bacolod, for a swim and a small picnic. Coni already had permission to wear civilian clothes and not just her usual habit, and she walked barefoot in the sand. She didn’t think there was anything remiss when casually Louie asked her to take a walk with him. She agreed and together, they left behind the students. 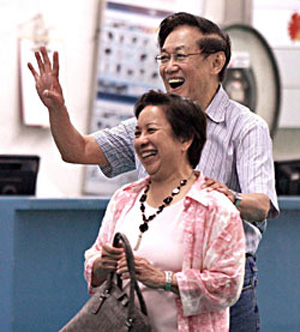 Louie and Coni during a recent visit to Manila. (Photo by Rudy Santos/Philippine Star)

“We didn’t talk about anything unusual or particularly new. He was also barefoot and I saw that he was flat-footed, so I teased him about that,” Coni said.

After a short while, however, both of them became quiet. Coni wondered about the sudden silence, and though she still felt comfortable even in the absence of words, she became curious why Louie stopped talking. Then Louie said that they should go back. Coni turned to go, but Louie stood there, unmoving. Then he closed the short gap between them and kissed her gently on the forehead and smiled. Neither said anything.

There was really no time to discuss with Louie what transpired between them. There was always work to be done and what little free time they had they spent with other priests and nuns in their respective quarters. But even if there had been time, Coni would not have known what to say.

“I had heard of other nuns saying that they had crushes on Louie. One of them even said that she was certain that Louie felt the same way about her and that when the time was right, they would hold hands. I didn’t say anything because at the time I really didn’t understand anything,” she said. All she was certain of, she added, was that she was happy.

Neither talked about their feelings for the other, but continued to work side by side in the SAC. Sometimes, however, Louie would touch Coni’s head as if giving her a blessing, but his hand would linger longer than it would on the usual congregant.

Because of her involvement in Victoria plantation strikes and her participation in political rallies and discussions, Coni began to outgrow her religious vows. She had seen first hand the terrible poverty that the ordinary folk of Negros experienced day in day out, and she grew to abhor what seemed like the complete lack of conscience that the landowning families had as they threw lavish parties. She herself came from the same class, but she willingly, even willfully, began to remove herself from it. Her political awareness had also begun to grow, and her eyes had been opened to the true reasons behind the worsening social conflict in the country.

As for her faith, it was still strong, but convent life was no longer for her.

“I didn’t know that Louie himself accepted that his priesthood  also ended when he became a member of the revolutionary movement. He told me later on when we had both gone underground that he had previously remained a priest because it gave him a measure of freedom to help organize more people and encourage them to join and support the revolution. When he told me that, I was a little annoyed because he didn’t tell me sooner,” she said.

Her annoyance, she went on to explain, was because she had to go through a period of self-questioning, trying to reconcile her religious vows with her rapidly increasing political and ideological growth. “I would’ve been able to come to terms with myself sooner, and I could’ve done more to help the movement.”

Louie was forced to go underground two days after martial law was declared. He eluded arrest during the initial crackdown simply because the arresting unit of soldiers were easily fooled by denials that Louie was at the seminary when they arrived to take him. Coni was able to see him only after she, too, went underground, and again they worked together in the same group gathering support against the dictatorship. They were captured in September 1973 and released in 1974; Coni was freed in July and Louie the following month.

It was during their time underground that Louie and Coni finally confessed their mutual affection. By then they were both revolutionaries, comrades in the struggle, and the love they felt for each other was as strong as their desire for the Filipino people to gain true freedom and democracy.

Louie was formally released from the priesthood in 1974, while Coni got her dispensation in December 1972, two months after she applied for it.  On December 19, 1974, she married Louie in simple rites at the Archbishop’s Residence in Mandaluyong. Then newly designated Jaime Cardinal Sin officiated the wedding.

Jalandoni and Ledesma are working with the National Democratic Front of the Philippines based in Europe. He is the front’s chief negotiator in the peace negotiations with the Philippine government. This story is an excerpt from a forthcoming book on Jalandoni.