This good-fellowship —  camaraderie —  usually occurring through the similarity of pursuits is unfortunately seldom superadded to love between the sexes, because men and women  associate not in their labours, but in their pleasures merely. Where, however, happy circumstance permits its development, the compounded feeling proves itself to be the only love which is strong as death — that love which many waters cannot quench, nor the floods drown, beside which the passion usually called by the name is evanescent as steam.

–Thomas Hardy, from “Far From the Madding Crowd”

They met at a time when the Philippines was awakening to a revolution that sought to empower the poor against their exploiters.  He was a priest, she was a nun, and the time was 1971, one year before the dictator Ferdinand E. Marcos declared martial law.

Luis “Louie” Jalandoni hailed from a family of landowners in Silay, Negros Occidental. He grew up rich, but it was a fact that never really sunk in until he noticed the differences between himself and the children of his family’s land tenants and farmers. The words “gentle” and “amiable” were always applied to him as he grew up and until he entered the priesthood; but when he became aware of the life-and-death struggles of the poor, his will and commitment to their cause became hard as steel. To look at him even then, in his early years as an activist priest, one wouldn’t have been able to tell that here was a man able to stand up against fully armed hacienda guards with nothing but the strength of his convictions. 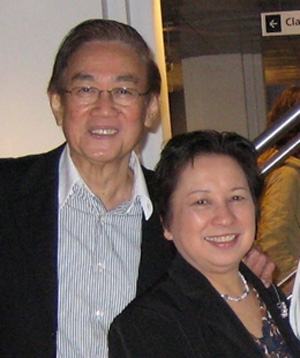 Louie and Coni, shown here in a recent picture, both came from landed families in Negros. (Photo from ndfwaikato.blogspot.com)

Maria  Consuelo “Coni” Kalaw Ledesma also came from Silay, and her background was as affluent as Louie’s. Her upbringing gave her physical grace; but in her diminutive frame came a soul eager to offer itself for the betterment of others.  In those days, it was believed that taking religious vows was the best way to serve — in promising to love and to serve God, one also sought to serve others. Coni believed this, and hence she became a nun.  Nothing remains static, however; as she became more exposed to the lives and experiences of people who lived way beneath the radar of the moneyed and supposedly more educated, she felt in her very core that there was more that could be done — that serving the people took meant more than praying for them.

It was a quirk of circumstance that two such people should meet under conditions very far from those they were born to. Both came from wealthy families, but they chose to live with the poor. They both chose to take religious vows, but in the end committed themselves to something beyond faith and religion.

In 1971, church groups began to support workers’ unions and their priests and nuns as well as students began to integrate with rural communities, helping peasants and farm workers by giving seminars on health and education. In the cities, organizing work in the urban-poor communities began in 1970 such as those in Tondo.

Over time, church organizing work began to include discussions on politics and the state of human rights in the country, and these were connected to why there was such widespread poverty. By 1971, there was more emphasis on organizing farmers, workers and the urban poor, and less focus on cooperatives and economic projects. 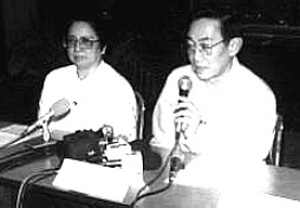 Louie and Coni in 1986, at the start of the peace process with the Corazon Aquino administration. (Photo from NDFP)

By then, Louie had become more than a priest — he was now an activist and the head of the Social Action Center of the Bacolod diocese. In the last few years, he had gained a reputation for espousing increasingly radical beliefs, bravely calling on younger seminarians and fellow priests to take a more active role in society and in the lives of the poor.

Coni, who once was a principal for an all-girls’ school in Cebu, had heard of Father Louie and about his work in the SAC.  She gained permission from her religious superiors and went to Bacolod. When she arrived at the SAC, everyone was busy helping sugar farm workers in their strike: at the time, more than 170 hacienda laborers of Victorias Milling Corporation were forced to launch a strike against the company’s unfair labor practices.

“He was wearing a polo barong when I first met him, and I remember being struck by how gentle he looked and sounded as he gave me a briefing on the situation the workers were facing,” Coni recalled. She was assigned as the press relations officer, and he was mainly in charge of the rest of the staff who included various students and out-of-school youth who helped the SAC in its advocacies. Louie made the rounds of the picket lines and led support actions for the workers. Coni took on other tasks  in the SAC that needed to be completed. The leaflets, press releases and statements Louie wrote Coni would disseminate to members of the media and the rest of the Bacolod and Negros community. They were together frequently and Coni’s esteem for Louie grew.

“I saw how committed he was to helping the workers, and I wanted to be the same. For all his gentleness, he was very firm when it came to defending the rights of the poor and it didn’t matter if he was talking to a landowner, a government official or armed soldiers. He seemed tireless and he literarily gave everything to help the workers,” she said.

Coni had, by then, heard how Louie had used his inheritance to build houses and a school for the hundreds of tenants in his family’s hacienda, and how the SAC was also largely dependent on him for its finances. “His wallet was always open when it came to the workers,” she said. “It really felt like he would do anything for them.”

Louie had a car then, a Volkswagen Beetle, and more often than not it was used to run errands for the strikers and their families. Louie frequently acted as chauffer to the students who visited the picket lines and to the strikers whenever they needed to get anything from the town.

As for Louie, he also noticed how Coni took to her work in the SAC like a fish to water.

“She was always in high spirits as she did the work. She talked to the workers and helped give them hope as she assured them of our full support. She didn’t mind staying up late to write or to get up very early. She didn’t mind cleaning the office or arranging the files or going out on errands. What needed to be done, she did and she did so cheerfully,” Louie said.

He also remembers her righteous anger and indignation after the student volunteers came back from delivering rice and groceries to the picket line and narrowly escaped death when they were shot at by the hacienda’s security men. “She was very angry, and she kept saying that we should all get guns and weapons to protect ourselves and defend the workers.  There was no fear in her, only outrage and determination.”

Needless to say, they became good friends, and their friendship was based on mutual respect strengthened by the shared commitment to help workers and their families.