CARHRIHL was signed by both parties in 1998. It aims to uphold human rights and international humanitarian law. In Oslo, both parties reaffirmed all past agreements including CARHRIHL, the Jasig, The Hague Joint Declaration, among others.

In an interview with Bulatlat.com, Fr. Diony Cabillas, secretary-general of Samahan ng Ex-Detainees Laban sa Detensyon at Para sa Aresto (Selda), said the arrest of Jazmines and Acosta is “an attempt by the military to sabotage the peace talks.”

“With the arrest of Jazmines in particular, the military thought that the NDFP would demand his release before peace talks could proceed. The military does not want both parties to tackle the most important agenda in the peace process,” Cabillas said, referring to socio-economic reforms.

At the opening ceremonies in Oslo, Jalandoni said Prof. Jose Maria Sison, chief political consultant of the NDFP, and Alexander Padilla, chairman of the GPH panel, would head the discussions for socio-economic reforms, the second substantive agenda in the peace talks.

Violations of the Jasig must be addressed, Cabillas said, adding that the arrests do not improve the atmosphere for peace talks. 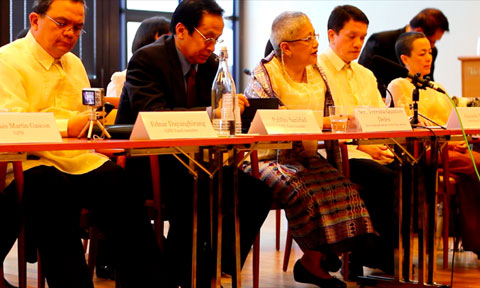 Cabillas said the GPH has yet to respond to the call of peace advocates to release all political prisoners. “If they are serious in the peace talks, they should stop the arrests and the filing of criminal charges against their perceived enemies,” Cabillas said.

After introducing the respective members of their panels, the GPH and NDFP delivered their opening statements.  Breaking tradition, Office of the Presidential Adviser on the Peace Process chairperson Teresita Deles delivered GPH’s opening remarks while Jalandoni performed his usual opening ceremony role for the NDFP.

Towards the end of the opening ceremony, both the GPH and the NDFP panel chairs expressed guarded optimism on the resumption of the negotiations.

“We have high hopes that this is a start, the beginning of a real, honest to goodness process for a just and equitable peace settlement between both parties that would lead to concrete benefits for our people.  We are hopeful that we will remain focused on these efforts and that we will accomplish these matters, hopefully within three years, maybe much, much less,” Padilla said.

Jalandoni, meanwhile, assured the Filipino people that “the NDFP carries their aspirations, interests and rights” in the talks “that will address the roots of the armed conflict to bring about lasting benefit by addressing their aspirations for their basic fundamental rights, such as land reform, national industrialization, economic sovereignty, justice, and genuine democracy for the peasants, workers, women, youth, indigenous peoples, and all sectors of the Filipino people.”