You Are Here: Home → 2011 → February → 24 → Kabataan Partylist Calls For Simplicity in Graduation Rites

MANILA — The only partylist group representing the youth and students sector in Congress wants graduates-to-be and their parents to be spared from paying for college rings, graduation balls and yearbooks. Simplicity, it said, should be practiced this coming graduation season.

“Schools should not add burden to our parents and students by requiring them to pay for frivolous items and expenses. They have already gone through a lot of financial difficulties because of the expensive cost of education in the country. Schools should not further hassle them and instead keep graduation ceremonies simple yet meaningful,” said Kabataan Partylist Representative Raymond Palatino after filing House Resolution No. 995, urging the Department of Education (DepEd) and the Commission on Higher Education (Ched) to strictly implement the policy of simple graduation rites and the non-collection of exorbitant graduation fees.

The DepEd has already issued reminders to school administrators and teachers to desist from collecting graduation fees. In 2009, it released DepEd Order No. 15-2009, and in 2010 released DepEd Order No. 13-2010, with both orders directing public and private schools not to require the payment of graduation fees and other exorbitant contributions for graduation rites. They also directed all schools to keep such ceremonies simple.

The Ched, however, has yet to release a similar pronouncement. 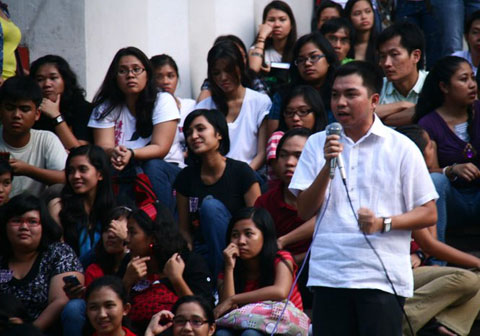 Palatino said students and parents have been complaining to his office about schools which charge fees for non-academic graduation requirements like yearbooks, parties, photographs, rings, and other memorabilia.

According to reports, graduation rings cost at least P700 ($16) each, while yearbook fees can amount to as much as P2,500 ($57). In the meantime, some school charge as much as P5,000 ($114) for graduation parties, holding the said events in venues like hotels and out-of-town resorts.

“It appears that many schools make the payment of these fees prerequisites for students. They have to pay these fees before they are given clearances and allowed to graduate. This should not be used as basis for a student’s clearance. That practice is detrimental to poor parents and students who are already hard up in producing money for far more important expenses,” Palatino argued.

According to information gathered by Kabataan Partylist, among the schools that collect graduation fees and make it a precondition for graduation include the University of Manila and the Philippine Normal University.

In the former, students are allegedly being required to purchase graduation rings as a prerequisite for graduation. In the latter, the graduation committee is being accused of pocketing profits from the exorbitant graduation-related fees.

In cases where it is the parents and students who want to organize parties and purchase memorabilia, Palatino said, the matter should be left to the organizers themselves. “If this is the case, then it’s fine for as long as it is voluntary. Those who find it financially burdensome should not be forced to join or pay as a graduation requirement.”

Palatino also urged parents and students to report any unjust graduation-related practices in schools through the Kabataan help desk and Kabataan hotline (352-10-42).

“The complaints we receive from parents and students serve as proof of school malpractices. We will forward these to DepEd and CHED. That way, our education agencies would not have any excuse for not being able to monitor and act on unjust graduation practices,” Palatino said.

Finally, Palatino said, school authorities should hold ceremonies that are commensurate to the financial and economic conditions of their students and their families. He also urged government agencies dealing with the country’s school institutions to to formulate strict policies with regard collection of exorbitant fees for non-academic graduation requirements.