You Are Here: Home → 2011 → February → 27 → News in Pictures: Hundreds of OFWs Stranded in Libya, in Dire Need of Assistance, Evacuation

News in Pictures: Hundreds of OFWs Stranded in Libya, in Dire Need of Assistance, Evacuation 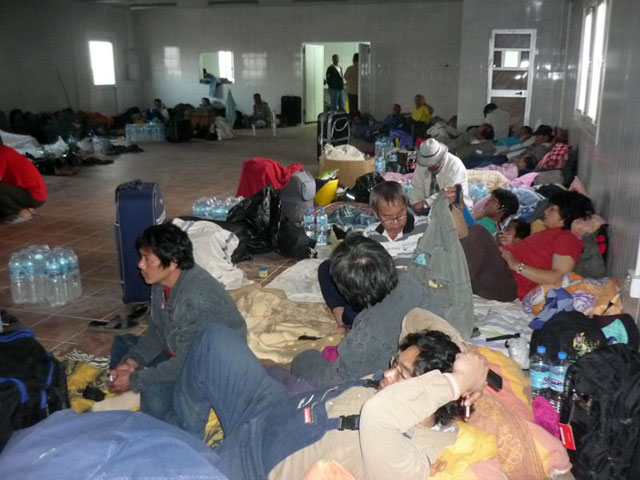 MANILA — According to Migrante International, 105 overseas Filipino workers (OFWs) are stranded at the Amal Area oilfields amid violent clashes in Libya. The OFWs are still awaiting immediate evacuation and to receive assistance from the Philippine embassy officials.

Through their crisis hotline, Migrante also received information that around 100 foreign workers in Wafa Site in ENI Gas Plant, including 47 OFWs, braved the dessert for seven hours in order to reach the Algerian border. However, the OFWs and 5 Thais were not allowed to pass through due to lack of documents.

The stranded OFWs called the Philippine Overseas Labor Office-Overseas Workers Welfare Administration (POLO-OWWA) in Libya and were told to return to Ghadames “to coordinate.” The OFWs remain at the border as of this posting.

Based on a report from the Department of Foreign Affairs, there are 25,737 Filipinos in Libya, working as medical workers, professors or skilled workers. Most of them, Migrante International said, are caught between the riots and are clueless as to how they would be brought out safely from Libya. (Photos courtesy of Migrante International /