You Are Here: Home → 2011 → February → 25 → OFWs in Libya Demand Repatriation Amid Violent Clashes

In the recent report of the Department of Foreign Affairs to the House of Representatives, there are 25,737 Filipinos in Libya, where 2,738 are women and 22,999 are men, working as medical workers, professors or skilled workers. Most of them, Migrante International said, are caught between the riots and are clueless as to how they would be brought out safely from Libya.

MANILA — Even before the violent protest actions against the 41-year rule of Moammar Gadhafi erupted, 17 overseas Filipino workers (OFWs) were already asking the Philippine embassy in Libya to facilitate their immediate repatriation. But their request was not acted upon. Now, with the violence sweeping Libya, their loved ones back home worry if they could ever be repatriated.

“They were only looking for luck and this is what they got,” Cecilia Barlis, 51, told Bulatlat.com, “It hurts.”

Barlis, who attended a recent press conference organized by migrant group Migrante International, is the wife of Bartolome, one of the 17 OFWs who have requested for their repatriation early on. Her husband, who left to work as an accountant on July 2009, found it hard to refuse a tempting one-year contract with a salary of $2,300 a month. Barlis said they wanted to earn more money because their children were already starting to build their own families. 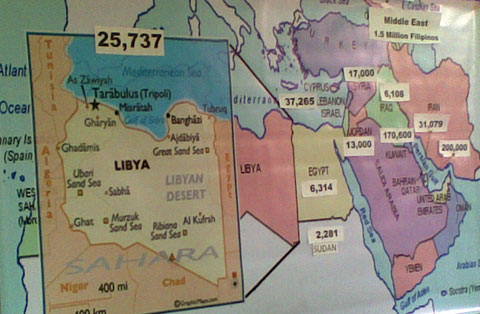 But upon arriving in Libya, Bartolome noticed that their company could hardly release their salaries on time. Then, on the fourth month, the company stopped paying their salaries. Their company kept on promising that their salaries would be paid but until Bartolome’s work contract have already expired, not a single cent was released to the workers. Worse, Barlis said, is that their employer refused to even send them home.

This, she said, forced Bartolome to renew his work visa but, this time, scouted for another employer. “He did not want to go home penniless,” she said. But it was hard to look for a new job. Barlis said companies would usually promise Bartolome that they would call him back for an interview but they never did.

Desperate to be repatriated, Bartolome went to the Philippine embassy to speak with Philippine Overseas Labor Office-Overseas Workers Welfare Administration officials. Barlis said her husband told her that the embassy “did not even entertain their concerns” and that “no help was extended to them.”

With the violence spreading, Barlis could not help but think if her husband’s repatriation could still be done. “There were only 17 of them who were asking for immediate repatriation. But now, everyone wants to go home,” she said, “Could they really accommodate all of them?”

Gaddafi, having ruled oil-rich Libya since the coup he led in 1969, has been facing protest actions for more than a week now, following closely an uprising that led to the ouster of Egypt’s President Hosni Mumbarak.

New York-based Human Rights Watch reported that 233 people have died since February 17. The United Nations has already announced their support for the anti-government rallies because of Gaddafi’s “despicable actions to attack the Libyan people.”

Despite this, Gaddafi seems to remain undaunted by the local and international pressures for him to step down. He, instead, on February 22, vowed to fight to his “last drop of blood,” which, unfortunately, signaled another week of escalated clashes between anti-government protesters and Gaddafi’s supporters.

In the recent report of the Department of Foreign Affairs to the House of Representatives, there are 25,737 Filipinos in Libya, where 2,738 are women and 22,999 are men, working as medical workers, professors or skilled workers. Most of them, Migrante International said, are caught between the riots and are clueless as to how they would be brought out safely from Libya.

Fr. Allan Archebuhe, OFM, director of Caritas-Libya, an affiliate of Migrante International, said in a statement that protesters have placed barricades around San Francesco Catholic Church found at the center of Tripoli, capital of Libya. “During the night, tear gas canisters were thrown and smoke enveloped the outside and inside of the church,” he said, “Then exchanges of gunfire started at around 10:00 p.m. and ended at around 7:00 the following morning.

Other OFWs in Libya, however, are not as lucky. Archebuhe said he received reports of about 25 OFWs trapped in the border of Egypt and Tubrouk, Libya. “They were abandoned by Dana Generak Contractor, a Libyan company, with no food and means of transportation.” He added that in WAFA Field, bordering Algeria, “there are 100 OFWs trapped with (food) supply only good for a few days.”