You Are Here: Home → 2011 → March → 1 → Progressive Educator, Writer Nominated as UP Diliman Chancellor

MANILA — The student body, faculty and non-academic staff members of the University of the Philippines (UP) Diliman campus are waiting for the election of their new chancellor, and many of them are hoping that it will be Professor Rolando B. Tolentino. 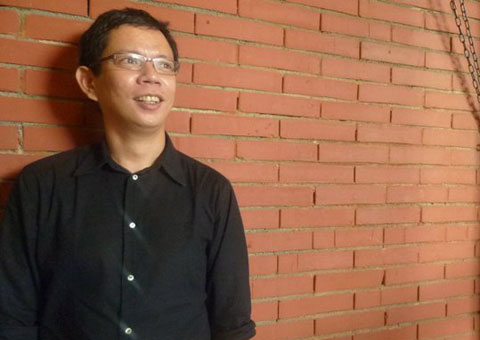 Prof. Rolando B. Tolentino, dean of the UP College of Mass Communications, is nominated, along with four others, for the position of UP Diliman Chancellor. (Photo by Sarah Raymundo / bulatlat.com)

According to a memorandum issued by outgoing UP president Emerlinda Roman, the UP Diliman chancellor search committee shall submit to UP president-select Alfredo Pascual a report of the search process and an assessment of the nominees for the position.

Pascual will choose one nominee from the search committee’s list. The BOR, the highest policy-making body of the university, will vote upon the president’s choice via secret balloting tomorrow, March 2 at 9 a.m.

The BOR is comprised of 11 members, with two members representing the faculty and the student body respectively.

Tolentino, currently the dean of the UP College of Mass Communications (CMC), has won the full support of cause-oriented groups within the university, as well as non-UP organizations because of his “consistent pro-people, nationalist education” stand.

A Critic of Education Privatization

In dialogues with the members of the UP community, Tolentino has professed that primary in his agenda would be the democratization of UP education. He wants to “democratize” admissions to the university. In recent years, fewer students from poor families were able to enter the university due to high cost of tuition and other fees.

Tolentino has also been a critic of what he views as undeniable indications of UP’s divergence from this mission.

“There’s the atomization of colleges in Diliman, along with their income-generating schemes toward self-sufficiency; the emergent class character of UP students who must not only be intelligent but also financially endowed; the uneven distribution of benefit packages among REPS [Research, Extension and Professional Staff], administrative staff and faculty; the lack of a formal grievance procedure for tenure and promotion; the lack of enabling conditions for junior faculty members and the many cases of exclusion of qualified senior faculty members from assuming more responsibilities on account of administrative parochialism; the interrelation and demarcation of power among governing units; the implementation of neoliberal policies or the practical and ideological privileging of private business and markets in running the affairs of the University when public service is its rightful character, etc,” he said.

These, Tolentino said, make up for an alarming state of things for the so called ‘university of the people.’ His goal, if elected as chancellor, is directed toward the upholding of the innovative and productive spirit of the Iskolar ng Bayan — one who is accountable to the Filipino people who subsidizes every scholar’s UP education; one who will serve the interest of the people after graduation — and the development of a culture of innovation.

“There is a need for a transparent and democratic governance to arrest the atomization of colleges and constitutent universities, and the development of solidarity that recognizes and cares for the welfare of all. The goal of this vision is to make UP the leader in higher education both within the nation and the region,” Tolentino said. 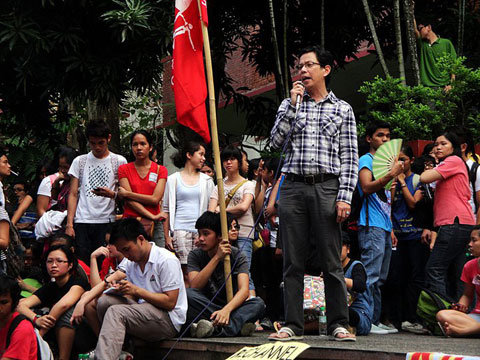 Prof. Tolentino’s primary agenda, if elected as chancellor, would be the democratization of UP education. This photo was taken during the UP Diliman community strike againsts budget cuts in state universities and colleges in November 2010. (Photo by Mon Ramirez / Arkibong Bayan / bulatlat.com)

Besides calling for a university more attuned to its inherent role as an institution serving the Filipino people, Tolentino said that he will bat for improved academic excellence in the university.

He said that he will promote research that is anchored on the interest of national development. Concretely, Tolentino is all for increasing funding for Research Dissemination Grants.

“We need this so more faculty members will be able to propagate new knowledge through conferences. I also hope to create a support system for excellent journals of the different colleges that will be able to solicit contribution from scholars from other universities and other countries,” he said.

Tolentino has laid down a comprehensive plan of action that involves the utilization of university funds for the purchase of books and research materials; the conduct of multidisciplinary seminars; the initiation of projects that from the different units within the four clusters of UP Diliman; and the promotion of multidisciplinary teaching especially on General Education courses.

Tolentino said that he wants UP to engage more in non-academic but socially relevant issues.

“UP Diliman’s colleges and institutions must intervene and take a stand on crucial academic and non-academic issues. UP Diliman will lose its public character if it cannot open its doors to poor but qualified students,” he said. Tolentino has time and again said that the greatest challenge for UP as it enters into another century is to remain faithful to its character as a national and a public university whose scholars are honorable, excellent and of service to the people.

Tolentino has long been supporting the call of academic and non-academic personnel in UP for salary hikes; the same way he has also been supporting the national campaign of private sector workers and government employees for wage increases. He has been a prominent participant in multisectoral campaigns both within and outside the university opposing corruption in government and demanding for economic reforms favoring the poor.

Tolentino said he will call for other forms of support for faculty, and non-academic staff including the provision of additional housing on campus, and if possible, outside of the campus, computer plans, shuttle service, medical and dental plans and other basic social services.