Tolentino has won the support of various members of the academic of the university, among them National Artist for Literature and College of Arts and Letters Professor Emeritus Bienvenido Lumbera, Professor Jose Wendell P. Capili, and poet/painter and writer Professor Jun Cruz Reyes, and Professor Elmer Ordonez, founding director of the University of the Philippines Press. They have all given glowing recommendations of Tolentino and his qualifications.

Lumbera said Tolentino is “nationally recognized” for his erudite studies on the relationship between cultural work and contemporary political life in Philippine society.

“As a full professor who has spent more than 30 years in the Diliman community, I can think of no one more qualified that Tolentino to discharge the duties of Chancellor,” Lumbera said.

Meanwhile, Reyes said that UP has many efficient administrators, artists, researchers academics who have become famous even outside the country. What the university needs, he said, is an individual who personifies all this and more. “The role of a visionary is important in running any institution. Roland Tolentino is one,” he said in Filipino. 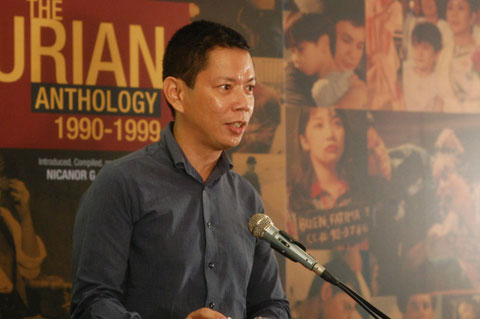 Colleagues of Prof. Tolentino in UP Diliman not only regard him as a “nationally recognized” educator and writer, but also as a visionary and a public servant. This photo was taken during the book launch of Urian Anthology 3 in September 2010. (Photo by Tom Estrera III / bulatlat.com)

Capili said that there are “very few” individuals who can approximate Tolentino’s capabilities and accomplishments as a writer, scholar, administrator and teacher.

Tolentino’s output, Capili said, reveals much about his personal and political philosophies, all of which show that the man is more than an academic and an artist but also a public servant.

Capili said that Tolentino’s body of work challenges the boundaries the separated “high” art from “low” art in the Philippines.

“For Professor Tolentino, creative and critical productions should not cater to a privileged few. Art should be accessible to a larger demographic,” he said.

Tolentino himself admits that he also intends to give emphasis on the further cultivation of arts and culture in UP Diliman. He says that if elected, he will also push for the implementation of programs that help develop democratic values, nationalism and national identity. 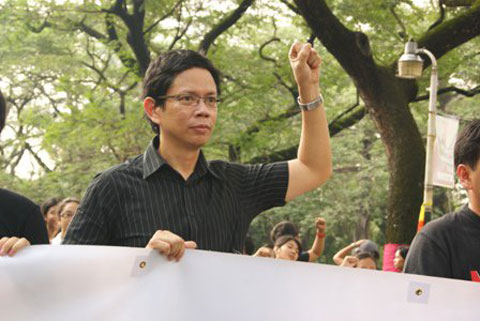 Prof. Tolentino believes that UP, as a university of the people, must take a stand on socially relevant issues. This photo was taken during the commemoration of the 1st anniversary of the Ampatuan Massacre in November 2010. (Photo by Kodao Productions / bulatlat.com)

In the meantime, volunteerism is something Tolentino wants to strengthen in UP, as he says he wants to relaunch the “Pahinungod” program which promoted voluntarism particularly among students . The program, he said, may be considered in order to promulgate service to the people and for this value to be brought to the poorest of communities.

Faculty and non-academic staff as well as residents of other UP campus communities have also thrown their support for Tolentino’s nomination for chancellor. Letters of strong recommendation from UP Visayas, UP Baguio, UP Miag-ao and UP Los Banos have been posted on the website established by Tolentino’s supporters. All the letters said that Tolentino has already proven his mettle as an administrator because he has been an excellent dean. “He is responsive to the needs of students, faculty and the rest of the community; he will uphold the interest of the university as a whole,” they said.

This story has been updated to reflect the following corrections:
1) The UP Board of Regent has 11, not 12, members.
2) The All UP Workers Union did not officially come out with a statement supporting or endorsing Dean Roland Tolentino.