You Are Here: Home → 2011 → March → 9 → Manila Preschool Teachers Against Contractualization

Manila preschool teachers are all in favor of the nationalization of the kindergarten program, but they are vehemently against the Department of education’s plans to hire new teachers on a contractual basis.

Led by their organization the Manila Kindergarten Teachers Association (MAKITA), Manila preschool teachers say that they will fight tooth and nail to prevent what they fear to be the lowering of the standards of preschool teaching in Manila and the rest of the country.

Sidebar: ‘Yes’ to Universal Kindergarten, ‘No’ to Contractualization of Kinder Teachers – ACT Teachers

Makita is the official alliance of Manila’s 200 kindergarten teachers established in 1974.

“We cannot allow the teaching profession to be compromised by making teachers contractual employees. This matter is made even more sensitive because it concerns the teaching of very young children. It takes more than simple willingness to teach children – one has to have the correct training and proper background because one will be dealing with highly impressionable minds,” said Araceli C. de Ocampo, president of Makita. 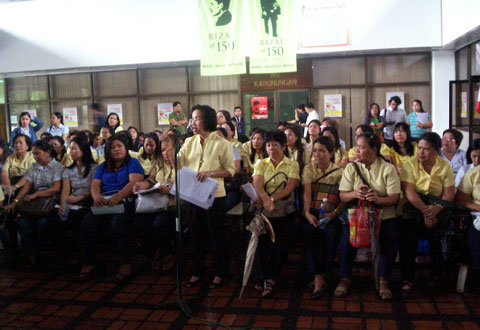 Members of the Manila Kindergarten Teachers Association (MAKITA), the official alliance of Manila’s 200 kindergarten teachers, said that they will fight tooth and nail to prevent what they fear to be the lowering of the standards of preschool teaching in Manila and the rest of the country. (Photo by Ina Alleco R. Silverio / bulatlat.com)

De Ocampo has had 35 years worth of experience teaching preschool. A teacher at the Gen. L. Geronimo Elementary School, she graduated with two masters degrees, one of them in preschool education from the Manuel Luis Quezon University (MLQU). She is also the president of Geronimo elementary’s faculty club, an active member of the Alliance of Concerned Teachers (ACT) and an official of the Manila Public School Teachers Association (MPSTA).

According to de Ocampo, the DepEd’s plans to hire contractual teachers directly contradicted its declarations that it wants to improve education in the country.

“A child’s learning begins at the home, it’s true; but once they attend school, it’s the teachers who take over the role of parents. Teaching very young children, those aged five and some even a little younger, requires much patience and skill. You cannot afford to be too strict because you might end up ‘terrorizing’ the child and he won’t return to school. On the other hand, if you’re too lenient, you’re classroom will turn into a warzone with 30 five-year olds running amok. Kindergarten teachers are like second parents, and children rely on us for their physical, emotional and intellectual needs when they’re in school,” she explained. 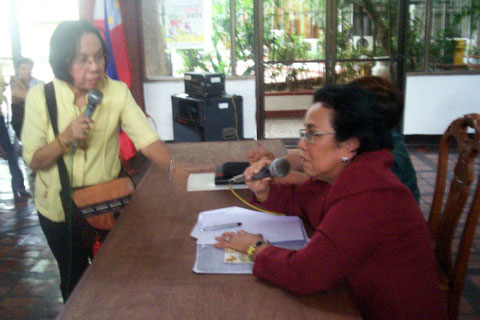 Members of Makita and MPSTA are seeking clarifications from DepEd officials (seated) regarding the implementation of the new preschool program. (Photo by Ina Alleco R. Silverio / bulatlat.com)

As far as de Ocampo knows, Makita is the first and only kindergarten teachers group in the entire country. She says that in the face of the Aquiino government’s plans to contractualization preschool teaching, it’s important for mentors to unite and assert a stand against it for the sake of the children.

“What will happen if we let the government lower education standards for the very young? We will be seriously threatening the chances of children getting off on the right foot with their education,” she said.

Ocampo is primarily against recommendations and plans of the DepEd to not only hire contractuals, but to double the work load of kindergarten teachers. Instead of teaching one session a day, the DepEd wants teachers to take on two sessions.

Kindergarten teachers currently teach one session a day for three hours per session. They teach class for three hours. After class, the three remaining work hours are devoted to preparing teaching aids, checking workbooks or papers and assignments of students, and updating the curriculum.

“Two sessions would be possible to undertake if the DepEd doesn’t care about us teachers falling sick on the job – none of us will be able to get any rest or time to go to the bathroom,” she said.

As for the children, de Ocampo said, just imagine teaching 60 or 70 five-years olds for six straight hours and one will get an idea of how difficult the gargantuan task is. 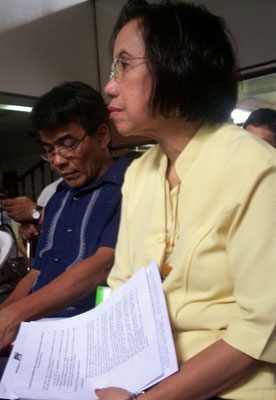 “Teachers are only people, we get tired. Our students are barely more than toddlers – they cannot be left unattended for even a single second. The DepEd’s plans if implemented will cause many of us to get nervous breakdowns, and the quality of education the students will be getting is certain to suffer,” she lamented.

De Ocampo said that the DepEd should not implement its plans for nationalizing kindergarten education if it was not really prepared . “And it’s not just the funds that the DepEd should prepare, but all the schools — there should be more classrooms with good, adequate facilities; books, teaching and education materials; chairs, tables, bathrooms. The DepEd can’t just impose a new policy without securing all bases. Otherwise there will be chaos, and the worst thing is what will happen to the young children. Their introduction to the world of formal learning will be less than ideal, and it can have a long-lasting effect on them and how they will view education in general,” she said.