MANILA – The rice industry is in peril as production of the staple food in the Philippines has been declining in the last two years, an agriculturalist said in a recently released report.

Finesa Cosico, an agriculturist and member of Agham (Advocates of Science and Technology for the People), cited figures from the Bureau of Agricultural Statistics showing that corn and rice production contracted last year.

Cosico said that there was a  host of reasons that are cited for the drop in crop output. 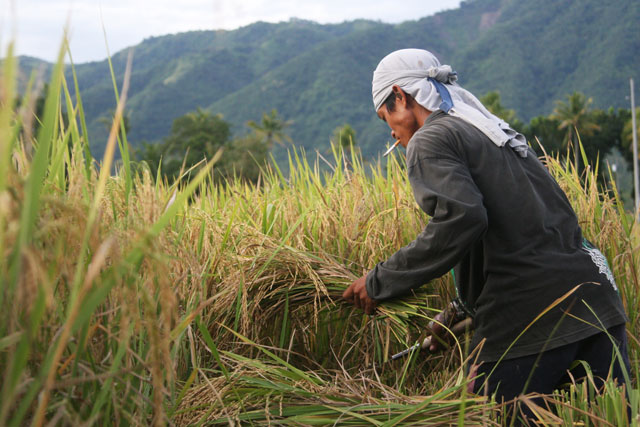 A rice farmer in Davao del Sur. Agriculturist Finesa Cosico cites a host of reasons for the drop in output. (Photo by Karlos Manlupig / bulatlat.com)

“There are the effects  of climate change and the vulnerability of our agricultural sector to both drought and rainfall. Then there’s the unabated land conversion for residential, commercial and industrial land and the replacement of staple food crops with high-value crops. These crops are grown mostly for export markets,” she said.

Cosico also pointed out that besides the inherent problems in the agriculture sector, there are the “problematic policies” of the government with regard to agrarian reform and food security. The Philippines continues to depending on imported rice to fill in the production gap, and in the last few years, the country has been one of the top rice importers in the region.

On March 8, Presidential Spokesperson Edwin Lacierda said that Pres. Aquino will meet with his officials and discuss the matter after Aquino returns from state visits in Indonesia and Singapore.  He said that Aquino will be meeting with agriculture secretary Proceso Alcala, NFA administrator Lito Banayo and Budget Secretary Florencio Abad after his arrival to discuss the food situation and the rice supply.

The Palace made the announcement in reaction to a statement made by senator Edgardo Angara that a food crisis could erupt as an effect of the the conflict in the Middle East and North Africa.

Lacierda said that for the moment, there is no crisis.

“The idea of whether there is a food crisis will have to be discussed because as I understand right now, there is no—and that is very clear—there is no food crisis right now,” Lacierda said.

The Palace official  said Aquino has already received a briefing from the NFA on the country’s rice supply. According to him, the NFA has already set its rice importation quotas.

When asked by the media if  the quotas  could change due to rapidly changing international  developments, Lacierda said, “The NFA has a standby authority to import in case the situation is aggravated.”

The government’s assertions that everything in the rice industry is under control is not enough to satisfy farmers groups. An alliance of agriculture and peasant groups has issued its own recommendations on ow the industry can be genuinely protected.

Earlier in February, representatives of farmers’ organizations, cooperatives, rice millers, irrigators’ associations, suppliers and consumers held a conference on the problems in rice production in the country. Led by Bantay Bigas, the activity dubbed  the National People’s Rice Congress, was held at the National Irrigation Administration’s Convention Hall. The goal of the Rice Congress was to strengthen the Philippine rice industry to ensure that the country becomes 100-percent rice self-sufficient in the next few years.

The groups presented the highlights of the event to agriculture secretary Alcala after the activity, and the official reportedly gave a commitment that the NFA Council will study Bantay Bigas’ recommendations.

Bantay Bigas has been conducting series of dialogues with the NFA on the determination of reasonable rice prices since 2009.

Cosico said that some of the policy actions that are recommended by the Rice Congress are to have an adequate budget for agricultural production and to give subsidies in particular to the grains industry.

“These should include production subsidies, seeds and organic fertilizers subsidies and improved services and facilities in the production chain. On top of these, the NFA should have the capacity to procure at least a quarter of the total rice production of Filipino farmers,” she said.

The agriculturalist said that modern tools and machinery for planting, harvesting, and processing of rice should be made available to improve and increase total rice production in the country.

“This should be coupled with the immediate development and improvement of agricultural infrastructure, especially for irrigation for rice production,” she said.

Cosico also shared that Bantay Bigas also carries a stand that irrigation fees should be reasonable, affordable or subsidized by the national government. The alliance also recommended that water for irrigation should be prioritized especially in times of drought.

In the meantime, the gathering of protection for the rice industry advocates have recognition to the role of women farm workers in the rice production.

According to Cosico, there is a consensus among the group’s allied members that there is a need for mechanisms that will support and enhance women’s significant role in the rice industry both as producers and consumers.

“Stress was given to the necessity of utilizing locally adapted rice varieties should in rice production and these should be protected from biopiracy and private appropriation. Farmer’s rights over the seeds should be recognized. Local seed exchange and seed banks should be encouraged and supported,” she said.

Public sector unions that joined the Rice Congress said that these privatization policies are in the form of the so-called “decoupling,” “rationalization,” “re-engineering” and restructuring of the NFA and other related agencies. Cosico reported that the stand of the delegates against land conversion was patently clear, and that they were also firmly opposed to the encroachment of mining and other industrial projects in agricultural lands should cease.

“While these suggestions may be easily done, a longer perspective to solving the rice crisis should also be taken into account. There is the long-running problem of landlessness in the country. This should be one of the top priorities of the government if it really wants to spur our agricultural output. The bills filed in the Philippine House of Representatives, House Bill 374, also known as the Genuine Agrarian Reform Act of 2010 and House Bill 3105 or the Rice Industry Development Act are steps in the right direction,” she concluded.