Yet, Lebria still considers his experience in Libya better than what he had gone through before in other places. “It was no ordinary war,” he said. “Everyone, even those in the desert, were affected. We were harassed (by the locals) because they were going hungry and knew that our company has sufficient food supply.”

Lebria went to Libya on April 24, 2010, working as head of the logistics department of a German-owned company. He said that his working conditions, after winning their struggle for their salaries, were relatively better. His salary was about $1,750 a month. But, he said, they had no choice but to move out of Libya when the violent protest actions erupted between supporters and critics of Moammar Gaddafi.

“Everyone (locals) was armed,” Lebria said, adding that if they get killed in the middle of the desert, “How would the embassy know of it?” He managed to contact the Philippine embassy in Libya, which promised them that they would send a vehicle to fetch the Filipinos from their worksite. But when the violence intensified, Lebria said they received a call from embassy officials, telling them they could no longer send vehicles due to security reasons. The Filipinos were instead advised to “remain calm” and to “stay inside their worksites” as they were in a relatively peaceful area compared to other areas.

“But we were not. We were in 100 percent danger,” Lebria said, referring to possible bombing of the oil tank of their company. 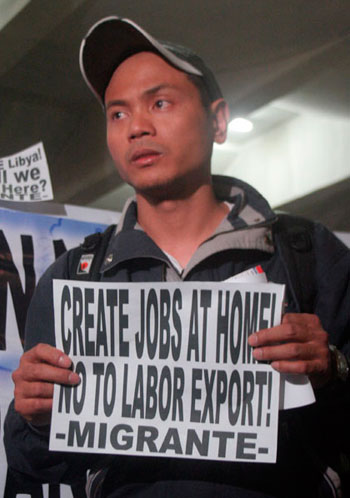 “Is hunger an indication of safety? Water shortage? Losing contacts with our families? Is that considered as safety?” Lebria said.

On February 24, they left for Tripoli, capital of Libya, aboard a coaster provided by the company. Two days later, they left for Djerba, Tunisia. On March 1, they moved to Malta where they caught a flight back to Manila on March 4.

“If not for our company, all 430 (co-worker) Filipinos would have been dead by now,” Lebria said. He said it was their company who had paid for everything, from their food to hotel accommodation, as they exited Libya via Tunisia and then Malta. Their company also covered all their transportation fees, including their airfare to Manila.

Back home, he said the Overseas Workers Welfare Administration (OWWA) and other government agencies welcomed the OFWs and presented them to the media like some sort of trophy. They were given red caps with the OWWA acronym embroidered on it and they were given a special lane out of the airport.

During his stay in Tunisia, Lebria said that China sent two chartered planes to fetch their nationals. “When we arrived in the boundary, other nationals were welcomed by their diplomats, doctors and nurses. In our case, there was no one,” he said.

“It seems the whole world was alarmed with the violence in Libya, all except the Philippines,” Lebria said.

Now that Lebria is back in the Philippines, he is attending congressional inquiries regarding the handling of the Department of Foreign Affairs and other government agencies of the repatriation of OFWs from the strife-torn country.

So far, OWWA has offered a one-time cash grant of about $230 to each OFW. But Migrante International said that such program is not sustainable “in the light of the recent spate of price hikes of basic commodities.” The OFW group added that even as the conflict in the Middle Eas rages, the Department of Labor and Employment was already “providing them with options to go back abroad even to conflict-ridden Middle East countries”.

“We are gravely concerned that the Philippine government continues to send our workers abroad when they fail to protect the welfare of our OFWs during critical times,” Martinez said. “But above all, Malacañang has not offered any clear and concrete response.”

Martinez said that the government should “get their act together and prepare in earnest” for implementing a truly sustainable program” for repatriated OFWs. Migrante-Middle East said that unless the government dropped its “neo-liberal policies of globalization such as liberalization, deregulation and privatization, the Filipino workers’ misery will worsen, pushing them to accept dirty, difficult and dangerous jobs overseas.”

When asked if he has plans to work abroad again, Lebria replied in jest: “Yes. To Afghanistan.”