Radiation Not A Cause For Worry, Earthquakes Are – Scientists

The Philippines is within the Pacific “ring of fire,” precisely called so because besides volcanoes, there are many major faults in the country.

We are not going to turn into mutants like the X-Men anytime soon because of the nuclear incident in the Fukushima Daiichi Nuclear Power Station in Japan; but we do have to prepare for earthquakes.

This was the realization of attendees of the recent forum sponsored by Agham Science and Technology for the People group dubbed as “Earthquake, Tsumani and Nuclear Accidents: Confronting the Challenges of these Calamities” held in Quezon City.

Agham invited Kristine Marie Romallosa of the Philippine Nuclear Research Institute(PNRI) and Kristine Abon, a professor of the National Institute of Geological Sciences (NIGS), to talk at the forum held at the University of the Philippines, Diliman campus to give overviews and insights regarding the calamities that have recently struck Japan.

Evidently aware of the increasing public worries regarding the nuclear incident in Japan and the fears that the radiation from the nuclear plant in Fukushima will reach the Philippines, Romallosa gave a detailed explanation regarding radiation and how precisely it can impact on human health. She said there are scientific standards and specific levels of radiation exposure before it can be considered seriously hazardous.

Radiation and its Hazards, Uses

“We are constantly exposed to radiation – from the food we eat, the water we drink, the pavement we step on, in the houses we live in depending on the materials. There is radiation from the sun and cosmic rays,” she said. She explained the two forms of radiation – ionizing and non-ionizing – and the kinds of radioactive materials.

Romallosa explained that the radiation that people are now greatly worried about is nuclear radiation. She said the hazardous type of radiation is the kind that ionizes.

Non-ionizing radiation is the kind that cannot penetrate even through thin sheets of paper, such as the electromagnetic energy from cell phones and radio towers; these are generally thought to be harmless.

Other non-iodizing radiation comes from microwave technology and is used in telecommunications and heating food; infrared radiation is used in infrared lamps to keep food warm in restaurants, and radio waves are used in the broadcasting industry.

According to Romallosa, the nuclear incident in Fukushima cannot be downplayed, but the public must be made aware about precisely what happened and what the dangers exactly are.

Romallosa said that right now, it is the “Faceless 50” who are in the greatest danger of exposure.

The title refers to the 50 unnamed nuclear plant operators who volunteered to stay behind to pump seawater on the dangerously exposed nuclear fuel to prevent full meltdowns.

As of latest reports, highly contaminated water is said to be escaping from a damaged reactor at the Fukushima plant and can soon leak into the ocean. This, experts say heightens the danger of further radiation leaks and will cause greater setbacks to efforts to contain the nuclear contamination crisis.

Scientists and engineers have been working overtime to control the six-reactor Fukushima complex since it was damaged by the earthquake and tsunami last March 11. Estimates point to over 27,000 casualties all over northeast part of Japan.

Regarding fears that the radiation in Japan can reach Philippine shores, Romallosa said there was no chance of that happening.

“We have the latest data and an efficient forecasting system. All these reveal that the radiation cannot and will not reach the Philippines. China and Korea are not even worried, and they are both closer to Japan than we are,” she said. “The greater the distance from the source of radiation, the less the risk; the greater the proximity, the higher the danger.”

If nuclear accidents and radiation can be prevented and controlled, earthquakes are a totally different matter all together, according to geologist Abon. 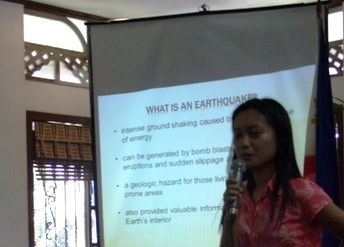 “Earthquakes occur daily, but most of them are so slight that only seismographs can detect their tremors and they hardly have any impact. The stronger earthquakes, in the meantime, often come without warning and the effects are obviously devastating,” she said.

Abon delivered an ‘Earthquake 101” lecture wherein she explained basic concepts in the study of earthquakes. She explained the difference between magnitude –the amount of energy released during an earthquake – and intensity – the extent of damage an earthquake can create.

“Developed countries can suffer earthquakes of high magnitudes, but the intensity wouldn’t be as high: the damage is considerably lessened because the buildings and other infrastructure were built precisely to be ‘earthquake-proof.’ In countries like the Philippines where laws on building structures like high-rise condominiums, offices and even bridges are often laxly enforced if at all, one can be certain that a high-magnitude earthquake results in extensive damage; it doesn’t matter much if the damage was only isolated to structures, what is worse is the devastation wrought on human lives,” she said.

According to Abon, the Philippines is within the Pacific “ring of fire,” precisely called so because besides volcanoes, there are many major faults in the country.

Abon cited the statements of experts saying that Bataan Nuclear Power Plant (BNPP) which some officials are thinking of reviving is located very near one such fault line and almost on top of the Natib volcano.

Lahar expert Dr. Kelvin Rodolfo in a forum two years ago said that despite claims that Natib is a dormant volcano, the caldera-type volcano is not extinct and an eruption is long overdue. In the meantime, regarding claims the Philvolcs made in 2009 that the there are no active fault lines under the BNPP, Rodolfo said it is actually standing on what would be a potential extension of the Pampanga Lineament.