Hacienda Luisita Farmworkers to Supreme Court: Give Us The Land Free and Clear

Now, with his both parents gone – his mother succumbed to complications of diabetes in 2005 and his father to possible liver failure in 2007 (“He drank a lot after mother died, and he was suffered great despair when the Cojuangcos said they will never give up Hacienda Luisita to the farmworkers”) – Miguel has taken it upon himself to continue what they believed in. Whenever he can, he joins the activities sponsored by the ULWU and the KMP.

“I learn much from being an activist. I learn about why my family is poor and why so many others are trapped in poverty. I know how injustice works, its victims and who the perpetrators are. I believe in fighting for the land my parents also fought for,” he said. 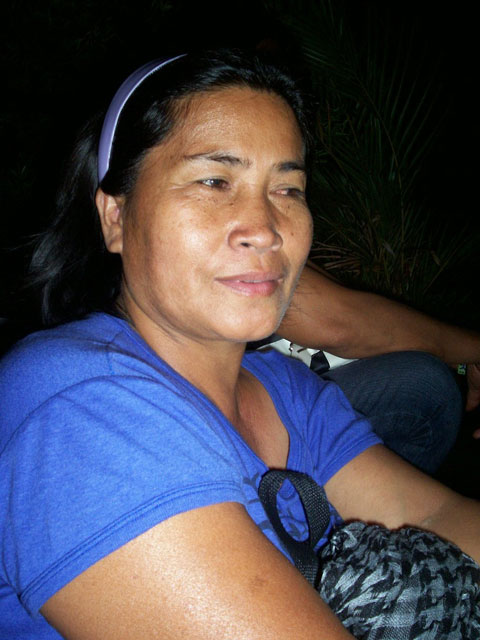 Juana Santiago, 44, farmworker:” I have heard it said that the Cojuangco-Aquinos have insisted that they were kind and humane to us farmworkers, but I never experienced any kindness from them.”” (Photo by Ina Alleco R. Silverio / bulatlat.com)

Mrs. Juana Santiago, 44, also believes in defending her family’s own claim to the land. She and her husband and children have been living in Brgy. Bantog since the early 80s, and she says that she has never seen any of the Cojuangcos.

“They say that they own the land, but we have never seen them work there. We have given our lives to make the land productive, but we were given crumbs and abuse in return,” she said.

Juana used to work in the sugar cane fields pulling out weeds to make sure that they do not stifle the sugar cane plants. She worked eight hours a day, three times a week and she received P9.50 ($0.22) for every day of work.

“I have heard it said that the Cojuangco-Aquinos have insisted that they were kind and humane to us farmworkers, but I never experienced any kindness from them. My own children were never able to finish high school, and we have lived a hand-to-mouth existence all these years. The benefits the Cojuangcos said that they gave us farmworkers never existed – we had to pay for everything, the schools, the health center services, housing,” she insisted.

Now, with the case still pending at the SC, Juana and her husband remain chained to poverty. Disregarding the Cojuangco’s declaration that they own the entire land, they have “sequestered” a little more than a hectare of it and planted it with rice and a few vegetables. Every four months they harvest rice and sell some of it, but in between harvests they survive on loans from relatives.

“The Leprosy of Money”

Supporters of the farmworkers of Hacienda Luisita and their struggle for land and justice have in the meantime been consistent in their commitment to help the farmworkers.

Last March 28, a mass was held at the Sta. Cruz Church in Binondo Manila specifically for the Hacienda Luisita farmers as well as all Filipino farmers who remain neglected by the government. The Promotion of Church People’s Response (PCPR) and the ecumenical community led by the National Council of Churches of the Philippines (NCCP) joined the farmworkers in the mass where 10 priests officiated. The main celebrant was Fr. Wilfredo Dulay, MJ and convenor of the National Clergy Discernment Group. The other celebrants were Fathers Antonio Cibuan, Gerson Afuea, Joseph Matipu, Eugene Canete, Efren Reyes, Oliver Estor, Efren de Guzman, Greg Obejas and Tito Maratas.

In his homily, Fr. Dulay said it was most unfortunate that those who have wealth are most unwilling to share what they have, and that they are “afflicted” with a kind of leprosy, “a leprosy caused by money.”

“The greed and injustice of those afflicted with ‘leprosy of money’ will be met by the most severe punishment . Exploiting the poor and the powerless will be punished with justice, and God’s justice is different from that of men: it is certain, it will not be denied,” he said.

Fr. Dulay expressed hope that the farmworkers of Hacienda Luisita would never lose hope and continue their struggle for land and justice. “May your hope be unlike the flickering lights of candles; may it be strong and may you all remain steadfast. We must not weaken in our struggle for justice and instead remain strong in our faith that the day will come that we will prevail and true change will happen,” he said.

PCPR secretary-general Nardy Sabino said it was very easy for the PCPR to convince the priests to offer mass for the farmworkers.

“They didn’t even require convincing, they merely asked when we wanted the mass to be held. They have been most supportive of the cause of the Hacienda Luisita farmworkers, the same way that they fully supported the campaign of the former Morong 43,” he said.

After the mass, the farmworkers and their supporters held a torch parade from Sta. Cruz Church to the cathedral of the Iglesia Filipina Independiente (IFI) along Taft Avenue fronting the Philippine General Hospital (PGH). In the IFI’s back parking lot where there was also a basketball court, the organization of poets ‘Kilometer 64, the Luisita Peasant and People’s Alliance held a cultural program.

The farmworkers slept there overnight and came daylight, they again took to the streets and marched toward Padre Faura to the SC building where they were told that the justices would be holding their en banc session in Baguio.

Undaunted, they proceeded to Mendiola, and there called out to Malacanang and its main resident President Benigno Aquino III to stop feigning objectivity and relinquish his family’s immoral and illegal claim to Hacienda Luisita.

“This is an issue of life and death for us, we will not be discouraged or ever dissuaded into giving up. Every Tuesday the justices would see the farmers of Hacienda Luisita hold protests in front the High Court building, and they would hear our demands for justice. As for President Aquino, he is fooling no one when he says that he is keeping his hands off this issue. He is the president, and it doesn’t matter if it’s his family that’s involved – if he is truly a man of justice and honor, he would have given up the hacienda long ago,” said ULWU’s Rodel Mesa.