“This is an issue of life-and-death not only for the indigenous peoples but also for the whole nation. If all of the mining projects will push through, the damage on the environment and on the people’s lives would be irreparable,” Joan Jaime of Kalipunan ng mga Katutubong Mamamayan ng Pilipinas (Kamp) said.

MANILA – A national alliance of indigenous peoples’ groups has once again raised the alarm against the effects of foreign-controlled large-scale mining.

The Kalipunan ng mga Katutubong Mamamayan ng Pilipinas (Kamp), together with Katribu party list and other groups, revived its national campaign dubbed as “Ancestral Lands at Risk of Mining” (ALARM) to defend the indigenous peoples’ territories against the onslaught of “imperialist mining.”

In a forum held April 8 in Quezon City, Joan Jaime, Kamp national coordinator, said that the new administration has virtually continued the priority mining projects of former president Gloria Macapagal-Arroyo. In fact, Jaime revealed that the Aquino administration proves to be “more aggressive” in attracting foreign mining corporations to invest in the country.

Jaime said that based on the initial and partial estimation of the approved and renewed mining projects as of October 2010, most of the mining projects are within the ancestral lands of indigenous peoples.

Citing data from the Mines and Geoscience Bureau (MGB) of the Department of Environment and Natural Resources (DENR), Jaime said that of the six projects with Financial or Technical Assistance Agreements (FTAA), five are within the ancestral domain of indigenous peoples covering more than 103,000 hectares. The FTAA is a contract between the Philippine government and mining companies allowing the latter to undertake large-scale exploration and development of minerals. It allows up to 100-percent foreign ownership in a mining project. 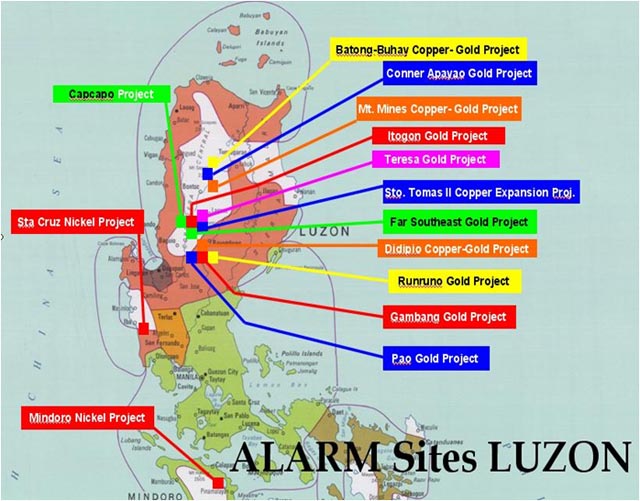 Meanwhile, of the 338 approved Mineral Product Sharing Agreement (MPSA), 118 are in indigenous peoples’ areas covering more than 533,000 hectares. In an MPSA, the government merely grants the right to the mineral resources whereas the contractor provides the financing, technology, management and personnel for the implementation of the agreement.

Furthermore, although only 39 of the 89 companies with exploration permits (EP) are within the indigenous peoples’ territories, these cover more than 244,000 hectares. An EP allows a qualified person to undertake exploration activities for mineral resources in certain areas open to mining.

According to Cordillera Peoples Alliance (CPA), nearly a million hectares or 51 percent of the Cordillera land area is covered by licensed operations and pending applications of mining transnational corporations (TNCs).

Mining operations and applications are in Abra, Benguet, Apayao, Kalinga, Ifugao and Mountain Province. Jaime said that mining corporations have also entered the coastal areas in Ilocos region. She added that the mining projects will eventually poison the Abra river, a major river system in the north. “Mining TNCs have destroyed the mountains, the rivers and the sea,” Jaime said.

Besides mining, there are existing and proposed dam projects in the Cordillera.

“The whole of Cordillera region is being sold out,” Jaime said.

In Cagayan Valley, there are two FTAAs covering more than 20,000 hectares of land and eight MPSAs covering more than 21,000 hectares. Jaime said among those affected are the Bugkalot and Ilongot tribes in Nueva Vizcaya and Quirino, the Agta, Aggay and Ayta in Cagayan, Quirino and Isabela and the Igorots who were displaced from Cordillera and have settled in the provinces of Cagayan Valley.

“These Igorots are again facing the threat of being driven away by mining,” Jaime said.

In Central Luzon, there are 18 MPSAs and 5 EPs mostly in Zambales province. Indigenous tribes such as Ayta, Dumagat and Igorot are most affected.

“Foreign large-scale mining would wipe out indigenous peoples in these areas. It is tantamount to ethnocide,” Jaime said. 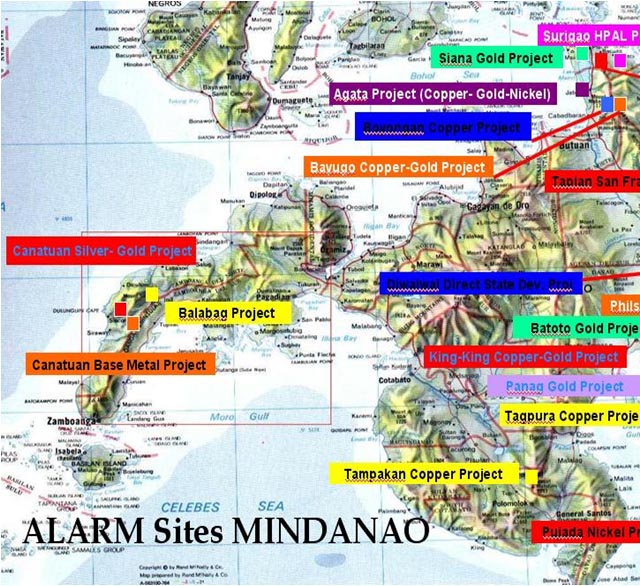 In many parts of Mindanao, the situation of indigenous peoples is almost the same.

In Surigao and Agusan provinces, Lumad groups Manobo, Mamanwa, Talaandig, Higaonon are most affected, Jaime said. In Bukidnon, Jaime said a “mining highway” was constructed for easier access of mining TNCs to areas. Dams are also being built to provide electricity for mining operations.

Meanwhile, in Davao region, 14 MPSA cover more than 35,000 hectares and 1 EP covers 24,600 hectares. There are five MPSA and two EP in Compostela Valley affecting Lumad tribes. In the quad-boundary of Socsksargen, Western Mining Corporation has taken over almost 100,000 hectares. At least 240,000 Lumads will be displaced by the operations.

In Zamboanga Peninsula, 13 MPSAs cover almost 43,00 hectares. The TVI Resource Development operating the Canatuan mine in Zamboanga del Norte is planning to expand its operations to other parts of Western Mindanao.