MANILA – Various groups called for the immediate release of a leader of indigenous peoples who was recently arrested in Pantabangan, Nueva Ecija.

Ernesto Bubod, 54, a Kalanguya-Igorot and vice chieftain of Sitio Maluyon, Brgy. Villarica, Pantabangan, Nueva Ecija, was taken by five armed men in plainclothes who posed as employees of the Energy Development Corporation (EDC) at around 11 a.m., March 22. He was later found by relatives at the Pantabangan jail.

The EDC is a stakeholder in the Casecnan Multipurpose Irrigation and Power Project, together with California Energy (CalEnergy) and the National Irrigation Administration (NIA).

According to the Kalipunan ng mga Katutubong Mamamayan ng Pilipinas (Kamp), Bubod is vocal in his opposition to the project as it would cause the displacement of some 35 Igorot families in Maluyon, Villarica village in Pantabangan town. “His arrest is blatant political persecution,” Piya Macliing Malayao, Kamp spokesperson, said. 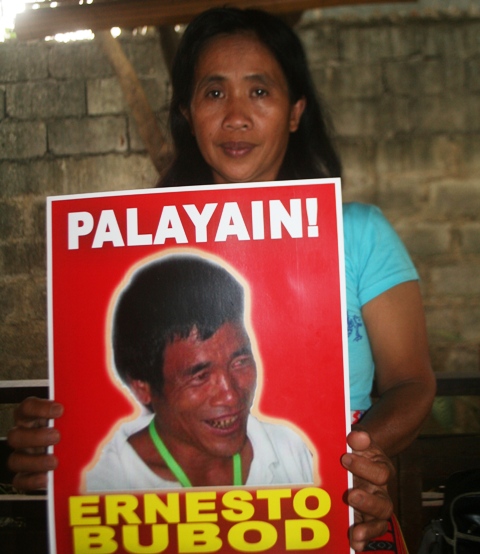 In an interview with Bulatlat.com, Bubod’s wife Lita said, five men wearing black shirts and bearing short firearms approached them while they were in their farm. The men introduced themselves as employees of the Energy Development Corporation (EDC). Bubod got up saying that he needed to tend to chores, but the men stopped him and proceeded to take pictures of him. Bubod told Lita, who did not realize at once that her husband was being arrested, to walk away. When Lita left, the men then began to force Bubod to go with them and when he refused, one of the men threatened him with a gun and reportedly told him, “Are you going to wait for this to go off?”

When Bubod did not go home that night, Lita, together with relatives, searched for him. They only found Bubod on March 25 at the Pantabangan police headquarter. He was charged with illegal possession of firearms. The men who took him were later identified as soldiers from the Charlie Company of the 81st Infantry Battalion Philippine Army.

Joseph Canlas, chairman of Alyansa ng Magbubukid sa Gitnang Luson (AMGL), said Bubod was first charged with arson, in relation to the burning of trees at the EDC plantation on March 17.

“He told the soldiers that at the time of the incident, he was attending a peasant leaders’ training somewhere, even showing his identification card for the training. He thought he would be off the hook but the military suddenly said he would be charged with illegal possession of firearms and explosives instead. There was no due process,” Canlas said.

In a join affidavit, Marvin Galsim and Michael Labarda, both soldiers of the 81st IBPA, claimed that on March 22, they saw a man and a woman under a mango tree. They said that from afar, they saw the man leaning on a long firearm, prompting them to shout that they are soldiers. Galsim and Labarda claimed they later found out that the man was Bubod and that they confiscated his shotgun.

Carlito Hongduan, chieftain of the Igorot community, deemed that the arrest of Bubod is part of the efforts to threaten them.

AMGL said indigenous peoples communities in Pantabangan and Carranglan towns in Nueva Ecija and Dupax del Sur and Alfonso Castañeda in Nueva Vizcaya are under heavy militarization since the Pantabangan Multi-purpose dam and hydro-electric power plant was privatized and awarded to the Lopez-controlled energy company First Gen Hydro Power Corp. (FGHPC) on September 8, 2006. On October 15, 2008, First Gen sold the multi-purpose infrastructure to another Lopez-controlled company EDC in partnership with CalEn. The water level of Pantabangan lake is sustained by a 27-kilometer tunnel from Casecnan Trans-Basin project operated by CalEn in Pantabangan and Alfonso Castañeda since 1996.

Along with the privatization, watershed and reforestation programs have been facilitated by the government through the NIA resulting to massive dislocation of Igorot and Bugkalot communities.

“This is a classic history of big local and foreign corporations snatching away ancestral lands in the name of profit, with the government facilitating it by using the military to terrorize and displace indigenous peoples from their land. This issue is reflective of the peasants’ struggle for land against the interests of energy corporations,” Canlas said.

Hongduan said the relocation site being offered to them at sitio Lower Tuli, Villarica village is not suitable for farming. “It’s beside the highway and we have no livelihood there,” Hongduan said.

The Igorot families have returned to the less than 20 hectares of land they had cultivated since 1990s in sitio Maluyon, Villarica village. “They are driving us away purportedly to give way for the tree planting and watershed programs but we know that the power plant is the real reason,” the Igorot leader said. ‘We believe that the EDC and NIA are the ones behind his [Bubod] arrest and detention.”

Beatriz Bawigan, spokeswoman of Katribu-Nueva Ecija said, “If the land is vacant, we cultivate it but now, they want to displace us. Where would the Igorots go?” she asked. “Of course, we would continue asserting and fighting for our ancestral land.”

“Legal harassment of indigenous peoples is almost always related to land issues…Their struggle to defend their ancestral territories against land grabbers is responded to by trumped up charges,” Kamp’s Malayao said, citing the case of Eddie Cruz, a Dumagat from Montalban, Rizal.

After the July 1990 earthquake, Igorots from earthquake-hit Cordillera areas migrated to Pantabangan and Carranglan towns in Nueval Ecija.

“Aquino simply continued the anti-people and anti-peasant programs and policies of the past regimes. The Pantabangan communities have been victims of Oplan Bantay Laya (OBL) that resulted to the killing of a UCCP [United Church of Christ in the Philippines] pastor and the disappearance of two indigenous farmers in 2006 during the privatization of the dam to First Gen. Now, they are again being targeted,” Canlas said.

Canlas was referring to Pastor Andy Pawican who was killed by suspected state agents on May 21, 2006. Peasants Rogel Marcial and Miguel Paltin who were among those who carried Pawican’s body have been missing since.

Canlas added that the Aquino’s counterinsurgency program Oplan Bayanihan subjects communities in the countryside to massive militarization. The Armed Forces of the Philippines (AFP) considers the tri-boundary area of Nueva Ecija, Aurora and Nueva Vizcaya as a stronghold of the New People’s Army (NPA).

“The Pantabangan area is also adjacent to the Fort Magsaysay Military Reservation in Laur, Nueva Ecija, one of the site of the US-Philippines Balikatan exercises. We are certain that US soldiers are in the area to protect the interest of CalEn and to threaten peasant resistance to its projects,” Canlas added. (With reports from Ina Alleco R. Silverio)