You Are Here: Home → 2011 → April → 18 → As Countdown to Earthday 2011 Begins: Environmentalists Decry the Aquino Government’s Lack of Concern for the Environment

As Countdown to Earthday 2011 Begins: Environmentalists Decry the Aquino Government’s Lack of Concern for the Environment

Environmental groups are set to commemorate International Earth Day on April 19 through various activities including rallies and fora. They say that Aquino government should stop sacrificing the environment and the people’s welfare on the altar of profit.

When it comes to protecting the environment, President Benigno Aquino received failing marks from environmental groups Center for Environmental Concerns (CEC) and the Kalikasan People’s Network for the Environment (PNE).

In a forum held in Quezon City, the groups presented their collective findings on how the Aquino government has addressed or failed to address various issues concerning the environment and the country’s human rights situation. They said that Aquino’s first year in office was a washout when it came to the environmental concerns.

The environmental groups are set to commemorate International Earth Day on April 19 through various activities including rallies and fora, and they said that the Aquino govenrment should heed their call for reforms in policies to protect the environment. 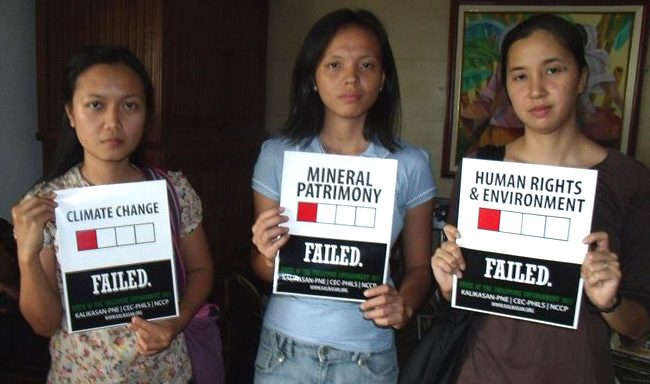 According to Kalikasan-PNE spokesperson Marjorie Pamintuan, President Aquino has failed to effectively address the country’s environmental problems and has in fact done much to aggravate them. She said that the government has no a clear “green agenda” and no defined policy direction addressing environmental concerns.

“The Aquino administration’s policies when it comes to mining ad forestry are no different from those of his predecessor Gloria Macapagal-Arroyo. The country’s ecology remains in fanger and vulnerable. Instead of protecting the environment and helping groups and organizations who seek to put an end to ecological and environmental destruction, the Aquino government continues to protect foreign business interests in industries related to natural resource extraction,” she said.

The Cec’s executive director Frances Quimpo in the meantime said that the main causes of environmental degradation in the country are rooted in the economic programs and policies of the government.

“Deforestation, depletion and contamination of water resources, worsening air pollution and biodiversity loss will persist as long as the government insists on its framework of regarding our resources as mere parts of a production line for export,” she said.

Quimpo said that the Aquino government attempted to show that it has a bias for protecting the environment by implementing a log ban via Executive Order 23 last February. She said that a total of 1,136,959 hectares (ha) of land is under mining concessions and another 1,422,190 has. under logging concessions, and all these contributed to massive deforestation. This supposedly prompted the government to impose a log ban.

“But the log ban was filled with loopholes,” Quimpo said. She said that the EO did not revoke or categorically ban commercial logging but only stopped the Environment and Natural Resources (DENR) from granting new contracts while reviewing existing contracts.

“There is still deep-seated corruption in the DENR and how it approvs and processes permits, as well as in how it allows logging in the so-called ‘plantation forests.’ Loggers actively exploit the loopholes in the ban by categorizing natural and residual forests as plantation forests,” she said.

As for the mining situation, the CEC’s findings revealed that has was a leap in the number of mining concessions that have been approved in a span of over a year. In 2009, there were only 545 approved concessions in 2009, but as of March 2011, some 240 more have already been approved.

Quimpo said that mining investments are noticeably on the rise.

According to the CEC, as of March 29, 2011, the government has approved a total of 785 mining agreements including six (6) Financial and Technical Assistance Agreements (FTAAs), 339 Mineral Production and Sharing Agreements (MPSAs), 115 Exploration Permits (Eps), 57 Mineral Processing and Production Permits (MPPs), 212 Industrial Sand and Gravel Permits and 56 lease contracts. All these permits cover almost three percent of the country’s total land area.

“The Aquino government prioritizes mining the same way the Macapagal-Arroyo government did. Already, mining investments under Aquino’s term increased by 65 percent. Aquino is also tragetting to increase this by US$17.35 billion by the year 2016. He has also appointed the former executive director of the Philippine Mining Development Council (PMDC) as secretary of the DENR and as presidential adviser on mining,” Quimpo said.