You Are Here: Home → 2011 → April → 18 → As Countdown to Earthday 2011 Begins: Environmentalists Decry the Aquino Government’s Lack of Concern for the Environment → Page 2

As Countdown to Earthday 2011 Begins: Environmentalists Decry the Aquino Government’s Lack of Concern for the Environment

In the meantime, agricultural lands remain under monopoly control and massive land use conversions have resulted in worsening landlessness.

According to a farmer from Capaz, Tarlac, they recognize the need to develop the land but massive land-use conversions and mining made them landless even if they have lived there for generations.

“In Pampanga, the government’s and companies’ promise to provide health care facilities and schools are useless if the residents do not have a source of income because they have been evicted from the land that they have been tilling.” 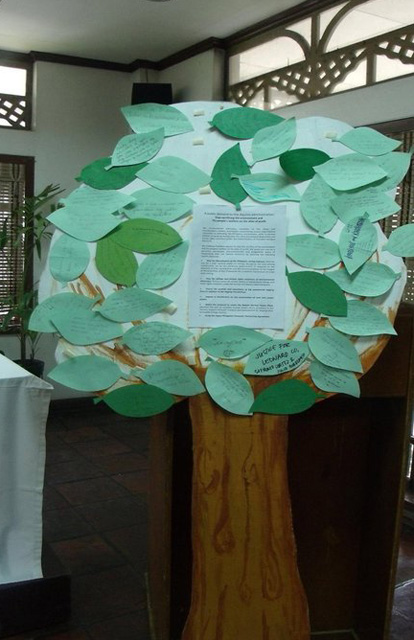 Farmers groups have already pointed out that President Aquino’s response when it comes to agrarian reform is severely wanting. They said that his almost ten month-old promise of distributing Hacienda Luisita to farmers has been the ultimate manifestation of his evasion of the root causes of the agrarian problems.

Kalikasan-PNE’s Pamintuan said that the environmental situation worsens, so does the condition of human rights.

“Within 10 months of the Aquino regime, six environmental activists became victims of extrajudicial killings. The latest case of which is the killing of Santos ‘Ricky’ Manrique on April 12,” she said.

Manrique, president of the federation of miners in Pantukan, Compostela Valley and member of Anakpawis partylist, was shot in his house while having dinner. The unidentified men immediately fled riding a motorcycle and are still at large.

According to Pamintuan, some of the victims first experienced being harassed through SLAPP or Strategic Lawsuits Against Public Participation, which included libel as the most common charge.

Some were also tagged as members of the New People’s Army (NPA), the armed wing of the Communist party of the Philippines (CPP).

“The perpetrators justify the killings by claiming that their victims are members of the NPA, as if saying members of the NPA don’t have human rights, and it’s legal for the military to shoot and kill them,” Pamintuan said.

Also, counted in the cases of EJK are that of top botanist Leonard Co and his companions Julius Borromeo and Sofronio Cortez. According to the spokesperson of the Justice for Leonard Co Movement, Aquino has yet to answer questions from the family and has not even offered his condolences to the bereaved.

“The administration promised change, but its actions contradict its statements as it continues to pursue and implement an economic platform promoting more foreign investmestments and public-private partnerships in industries such as mining, energy and agri-business. This government is no different from the others it succeeded: it’s on the wayward path towards greater ecological destruction, leading Filipinos to greater poverty,” she said.

Unity Statement for the environment

At the end of the forum, attendees were encouraged to pledge their commitment to help protect the environment by signing paper leaves which they then posted on a bulletin board in the shape of a tree.

The environmental groups also circulated a a unity statement signed by 104 members of ecumenical groups, church leaders and workers and 18 personalities and members of people’s organizations. The signatories called on President Aquino to “stop sacrificing the environment and the people’s welfare on the altar of profit.”

“We assert our calls for a genuinely pro-people, pro-environment and progressive policy of stewardship over our natural resources,” they said.

Among the signatories are Rev. Broderick Pabillo, Auxilliary Bishop of Manila; Rev. Deogracias Iniguez of Caloocan; Rev. Joel Z. Baylon of Legazpi; Rev. Sofronio Bancud of Cabanatuan; Fr. Rex Reyes, secretary-general of the National Council of Churches of the Philippines; Bishop Reuel Matigza, general secretary of the United Church of Christ of the Philippines; Bishop Solito Toquero of the Ecumenical Bishops’ Forum United Methodist Church; and various members of the National Clergy Discernment Group and the Religious Sisters Discernment Group.