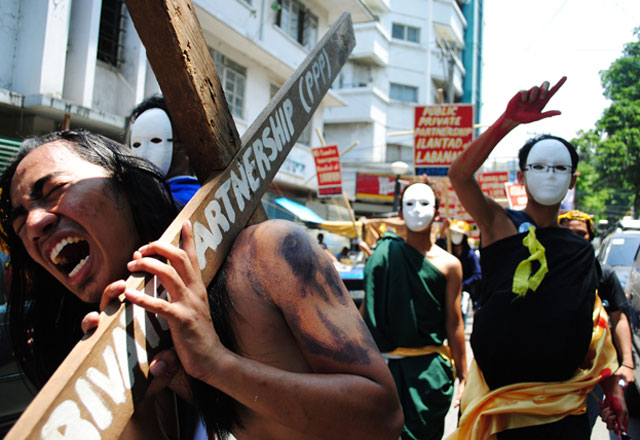 MANILA — They wore crown of thorns — yellow crown of thorns — not just to depict the burdens that poor Filipinos go through but to also portray how life gets harder under the new administration of President Benigno S. Aquino III.

Paul Quinta, spokesperson of Bagong Alyansang Makabayan-National Capital Region, said that the “only thing that differentiates the Aquino administration from the past regimes is how life nowadays is getting much worse with the price of everything soaring up.” 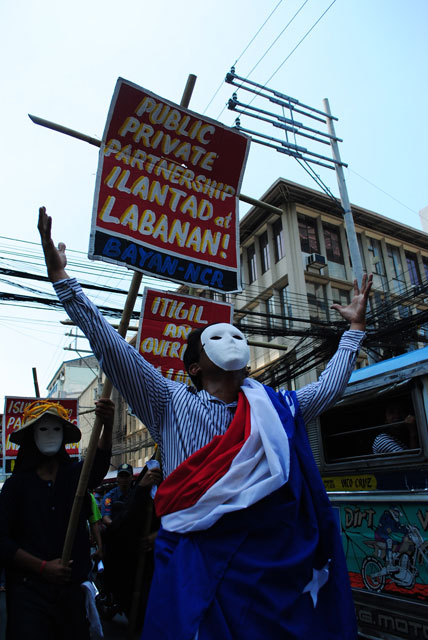 Bayan-NCR criticized the Aquino administration for its flagship policies that are under the banner of globalization, privatization, liberalization and deregulation. Max Santiago, spokesperson of Sining Bugkos, an alliance group of cultural workers, said that these flagship policies are comparable to the yellow crown of thorns that has made life harder for most Filipinos. While on the other hand, he said, there are only a few who are benefiting from these policies, “mostly belonging to the ruling elite class and not the Filipino masses.”

Santiago added that the yellow crown of thorns also refer to the unfulfilled promises of Aquino during his bid for presidency. “If there are so-called changes in the government, these are only superficial and are not solutions to the fundamental problems of the Philippine society.”

For one, Quinta pointed out the absence of a genuine agrarian reform program. “(Aquino) would not even be able to boast that his administration will push for an agrarian reform program because he could not even implement it in his own bailiwick,” he said, referring to 6,453 real estate of Hacienda Luisita owned by Aquino and his family, where there has been an agrarian dispute for more than half a century already. 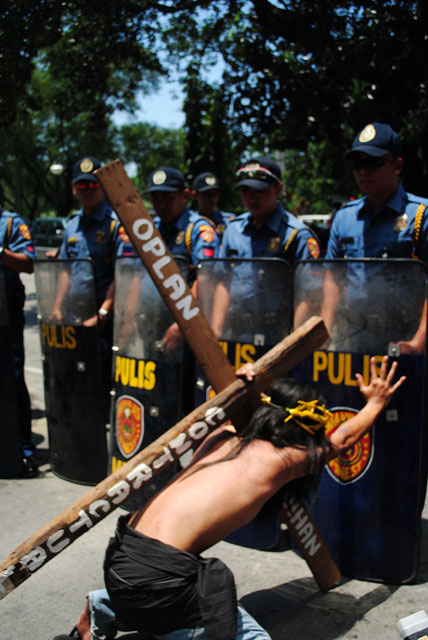 Quinta said that there seems to be no chance for a national industrialization to take place under the Aquino government. Considering, he said, that the Aquino government continues to depend highly on the “dictates of the United States government with regard to our domestic economy, political, military and cultural affairs.”

Bayan-NCR also condemned the “direct hand of the US military on the internal security in the country plan evident on the ongoing Joint US-RP Balikatan exercises and Oplan Bayanihan.”

“Ending the Filipino people’s misery means ending the master-puppet relationship between the US and the Philippine government,” Quinta said, “Once our country would not be subservient to the impositions of the US government, it is now possible to implement a genuine agrarian reform that will benefit the majority.” 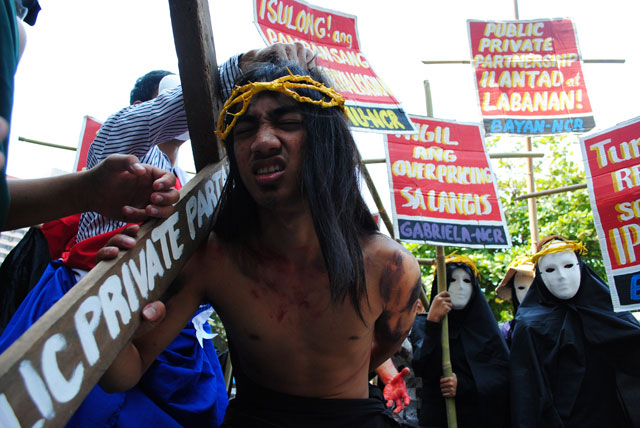 This Holy Wednesday, April 20, Bayan NCR will hold Stations of the Cross, Seven Last Words, Senakulo and Protest March from San Juan City to Bustillos Church. At around noon, they will celebrate an ecumenical mass for Jobs, Homes and Justice at the Bustillos Church and then march to Mendiola for the Kalbaryo ng Sambayanan.

Santiago said that Kalbaryo is staged in time for the Holy Week as it aims to “make Christ’s suffering and death more relevant to the contemporary times.”