You Are Here: Home → 2011 → May → 6 → NDFP asks UN Special Representative on Children to look into human rights violations against children in Samar

A few weeks after the visit of United Nations Special Representative on Children and Armed Conflict Radhika Coomaraswamy in the Philippines, the the Communist Party of the Philippines (CPP) called on her office to investigate an incident that took place last March 4 in Matuguinao, Samar. According to the CPP, troops of the Armed Forces of the Philippines (AFP) conducted military operations against residents of Barangay (village) Carolina, subjecting children and their parents to terrorism and abuse.

The CPP said it is also investigating the incident after receiving complaints from residents of Matuguinao that armed soldiers rampaged through their village and forced people to attend a meeting sponsored by the military against the New People’s Army. 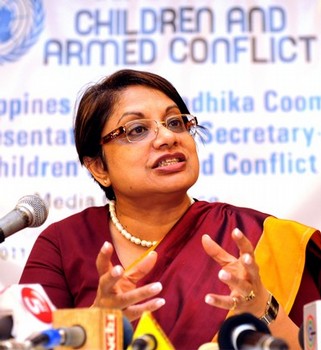 The CPP called on UN Special Rep. Coomaraswamy to look into the particular incident where four siblings were reportedly terrorized by soldiers right inside their home. The children’s ages ranged from four to 12 yrs old. They were left alone in the house after their father was forced to attend the meeting the military had set up.

According to the CPP, the soldiers forced their way into the house and asked the children where they kept their firearms. The children then supposedly answered that there was no gun in the house. The military then accused the children of lying, and relented only when the eldest child told the soldiers to search the house if they did not believe them.

“The CPP strongly condemns the terrorist treatment of the children of Matuguinao. The military operations carried out by the AFP under its so-called ‘Community Organizing for Peace and Development’ subjected the children and their parents to human rights abuses,” said the CPP.

“The Matuguinao operation conducted by the AFP reveals the hypocrisy of the AFP’s declarations promoting human rights. It shows that the so-called civil-military operations under Oplan Bayanihan are as brutal and violent, if not worse, than before. ”

Clarification on issue of child soldiers

In the meantime, the the Human Rights Monitoring Committee of the National Democratic Front of the Philippines (NDFP) issued a clarification in connection with its exploratory meeting with the said UN official last April on 7 April 2011 after the official said in a press conference that the NDFP “had agreed to an action plan to remove child combatants from its ranks but there was no discussion of details and numbers.”

“They didn’t categorically say that they had children (combatants) maybe because of legal reasons but they did acknowledge that it was a problem,” Coomaraswamy was quoted in reports.

NDFP Human Rights Committee chairman Fidel V. Agcaoili said that at no time during the meeting did the NDFP acknowledge the existence of so-called child soldiers in the ranks of the NPA. He said that the CPP has a clear policy directive that the recruitment age to the NPA was 18 years. This, he said, has been in place and has been implemented since 1988 and reiterated in two memoranda by the Military Commission of the Central Committee (CC) of the CPP in August 1999 and the Executive Committee of the CPP in October 1999.

“We are issuing this clarification to dispel any wrong impression which may have been created in the press release issued during the the UN Special Representative’s media conference on April 9,” he said.

Based on reports, Coomaraswamy presented a generic proposed action plan between the UN Working Group on Children and Armed Conflict and armed groups in internal conflicts with States for consideration and study by the NDFP.

The NDFP-MC also submitted a letter of protest to the office of the UN Special Representative in connection with its yearly reports to the UN Secretary General to the UN Security Council and the General Assembly. It referred to the two special reports by the UN Secretary General on the situation of armed conflicts in the Philippines (24 April 2008 and 21 January 2010) and the 3 October 2008 “Conclusions on Children and Armed Conflict in the Philippines” by the UN Security Council acting as the Working Group on Children and Armed Conflict.