“The thieves who raided the nation’s coffers cannot be allowed to escape punishment. President Aquino should take a cue from actions such as this filing of criminal charges against Gutierrez and put meat into his words that he is an enemy of the corrupt.” – lawyers’ group

Former ombudsman Merceditas Gutierrez may have resigned from her post, but by no means is she going to enjoy her new state of unemployment.

On Monday, May 9, leaders of the farmers group Kilusang Magbubukid ng Pilipinas were accompanied by lawyers from Sentro Para sa Tunay na Repormang Agraryo (Sentra) and the National Union of Peoples’ Lawyers (NUPL) as they filed criminal charges against resigned Ombudsman Merceditas Gutierrez at the Department of Justice in connection with the P728-million fertilizer fund scam. 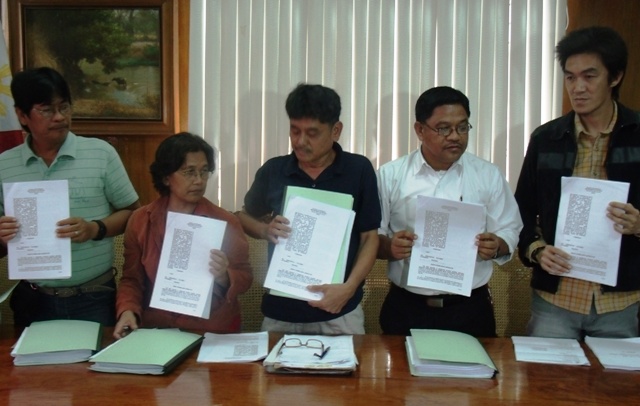 NUPL secretary general and lawyer Edre Olalia said Gutierrez should be held liable for violation of the Anti-Graft and Corrupt Practices Act. He said the violations were tantamount to obstruction of justice and perjury in connection with the graft complaint the said farmers’ organizations lodged against Gloria Macapagal-Arroyo on the issue of the fertilizer scam.

“Gutierrez resigned, yes, but it doesn’t mean that she can no longer be held accountable or responsible for how she did not perform her duty to prosecute important corruption cases involving the previous administration under Gloria Macapagal-Arroyo. We cannot allow Gutierrez and officials like her to go unpunished for betraying the public trust. These people must be made to account for their actions. Gutierrez was tasked to go after officials who committed serious acts of corruption, but she sat on the cases involving massive graft and corruption,” he said.

Mariano said that the former ombudsman unfailingly served as the the “main protector” of those who masterminded the malversation of P728 million fertilizer funds in 2004.

“As a willing accomplice in the plunder of farmers’ funds, Gutierrez must be held criminally liable,” he said. He asserted that complaint the farmers groups filed are part of their quest for justice and accountability against the previous regime, and a message to the incumbent administration.

“We want to send a strong political message to President Benigno Aquino III that we are keeping a close eye on his administration. He has so far done nothing to hold the thieves accountable, but the Filipino people are determined to see justice done. The thieves who raided the nation’s coffers cannot be allowed to escape punishment. President Aquino should take a cue from actions such as this filing of criminal charges against Gutierrez and put meat into his words that he is an enemy of the corrupt,” he said.

The origins of the controversy

In 2003, an employee of the Department of Agriculture’s resident ombudsman in Central Mindanao Marlene Esperat filed a graft complaint against then agriculture secretary Arthur Yap, then undersecretary Jocelyn Bolante, and several others in connection with alleged irregularities in a P432-million fertilizer deal.

Two months before the May 2004 presidential election, Macapagal-Arroyo, herself running for election, was accused by several politicians of “virtual vote-buying” by approving the release of P728 million to favored officials to buy farm inputs like fertilizer and pesticide for their constituents, as part of the Ginintuang Masaganang Ani project.

Farmers from Central Luzon and all over Mindanao attested in consequent investigations that they did not receive a single centavo from the fertilizer fund.

As for Esperat who later became a journalist, she was shot dead in her home in Sultan Kudarat on March 24, 2005. Three men were convicted of her murder, but the suspected masterminds—alleged to be officials of the agriculture department office in Central Mindanao —remain at large.