Imprisoned for refusing to leave their land

Sidebar: For two Igorot women, a constant struggle to survive

SAN JOSE CITY, Nueva Ecija – Igorot farmer Ernesto Bubod was all smiles when he saw his visitors, May 3. With his wife Lita were leaders of farmers’ groups and human rights organizations from various provinces in Central Luzon and Manila.

But boredom was killing him inside the San Jose City District Jail. “I am not used to doing nothing,” Bubod told Bulatlat.com.

Ernesto Bubod, 54, a Kalanguya-Igorot, was taken by five armed men in plainclothes at around 11 a.m., March 22 while resting on his farm at sitio Maluyon, Fatima village, Pantabangan, Nueva Ecija. He was later found by relatives at the Pantabangan jail. Weeks after, he was transferred to San Jose City District Jail.

“The men said I should come along if I do not want to anger them. We rode a motorcycle and they brought me to the municipal hall. I went with them because I know I committed no crime,” Bubod said, adding that the men later identified themselves as policemen and soldiers.

Bubod was initially charged with arson in relation to the burning of trees at the Energy Development Corporation (EDC) plantation on March 17. When he proved to the police that he was somewhere else at the time of the incident, the charge was changed to illegal possession of firearms.

“I was surprised to see the shotgun. They took it from the military vehicle and placed it beside me. It is not mine,” Bubod related, shaking his head.

Soldiers of the 81st Infantry Battalion of the Philippine Army namely Marvin Galsim and Michael Labarda executed an affidavit claiming that on March 22, they saw Bubod leaning on a long firearm under a mango tree.

Bubod believes that his arrest and detention is related to his refusal to leave the land they have been tilling for more than a decade.

Bubod’s family and other Igorot families are being driven away by the EDC and the National Irrigation Administration (NIA) purportedly for reforestation and watershed programs. Also underway is the privatization of Pantabangan multi-purpose dam and hydro-electric power plant that was awarded to a Lopez-controlled energy company First Gen Hydro Power Corp. (FGHPC) on September 8, 2006. On October 15, 2008, First Gen sold the multi-purpose infrastructure to another Lopez-controlled company EDC in partnership with California Energy.

Some 30 families have been relocated to Lower Tuli subvillage, Villarica village in Pantabangan. The place, Igorot families said, is not suitable to farming. Many return to Maluyon subvillage to tend to their farms. 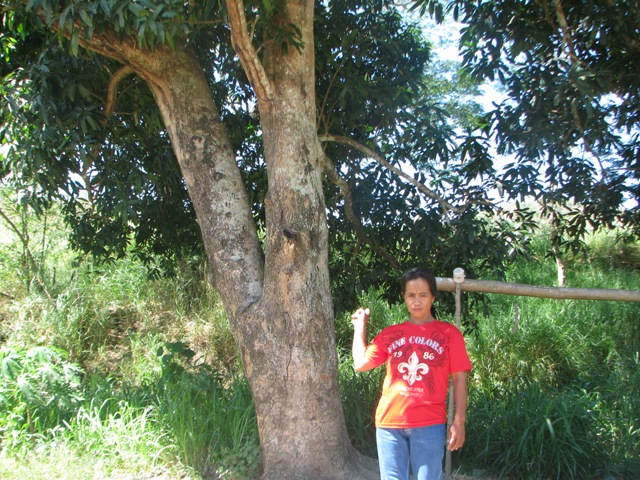 Ernesto Bubod’s wife Lita points to the mango tree where her husband was taken by soldiers and policemen on March 22.(Photo by Ronalyn V. Olea / bulatlat.com) 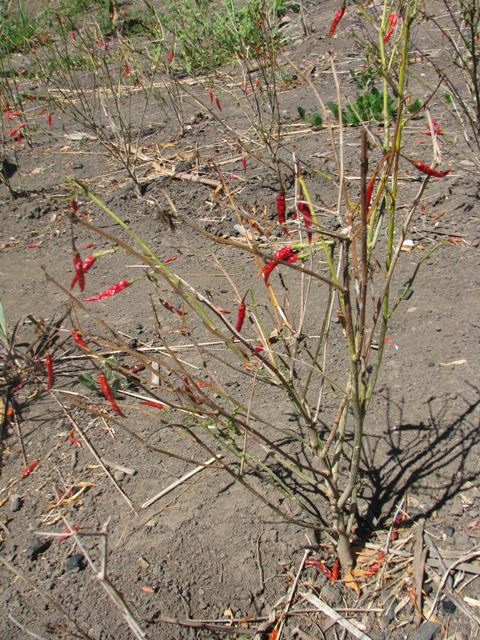 “If only we have no crops there, we would have left the place,” Bubod said. “Farming is our only source of livelihood.”

“I miss working on my farm,” Bubod said. “My body aches because I am not doing anything.”

Bubod’s farm seems to miss him, too. Before seeing him, his visitors went to see his farm. The cayenne pepper he planted has dried up. Wiping her tears, his wife Lita said, they could no longer be reaped.

The nipa hut he started to build remains unfinished. The other side still has no roof.

He also planted coffee and some fruits on half a hectare of land. Before his arrest, Bubod and his wife Lita just finished manually threshing the palay.

In the meantime, he has to fight boredom.

At the detention center, Bubod and other prisoners are served with meals that cannot pass as decent. Breakfast is without coffee; prisoners have to buy their own coffee. A small piece of fried galunggong or mackarel scad (a poor man’s fish) or half a piece of hotdog and a cup of rice is their standard meal.

Antonio Flores of Kilusang Magbubukid ng Pilipinas (KMP) handed to him copies of their newsletters. A relative gave him betel nut to chew. Another offered him cigarette which he refused. Some of his visitors chipped in small amounts of cash to help him through.

“Be strong. We are looking for ways to help you,” Joseph Canlas, chairman of Alyansa ng Magbubukid sa Gitnang Luson (AMGL) told Bubod.

“You will be free. We will not abandon you,” Flores told him, patting his back.