You Are Here: Home → 2011 → May → 13 → Proposed Department of Housing promotes homelessness, privatization of public housing

“Like its predecessors, the Aquino government is abandoning its responsibility to provide social services to its poor constituents … By partnering with the private sector in building public housing, it can be expected that the government will confine its function to that of an enabler which is limited to policy formulation and program monitoring.”

MANILA — Employees of the National Housing Authority (NHA) are against plans of the Benigno Aquino III government to privatize housing services and to create a Department of Housing and Urban Development. They were joined by residents from urban poor communities in Quezon City and Metro Manila in a protest last May 8 in front of the House of Representatives.

Rosalinda Nartates, president of the the Consolidated Union of Employees-NHA is adamant in protesting against the proposed agency, saying that it is all part of a privatization scheme. Public housing under the proposed DHUD, she said, will become more profit-oriented than it already is.

NHA employees and urban poor organizations under the Kalipunan ng Damayang Mahihirap (Kadamay) have been fighting against moves to privatize public housing and legislative proposals on the same since the year 2000 and since the 9th Congress. Nartates also said that their stand against the DHUD also had to do with the proposed reorganization of the seven key shelter agencies. In the line of fire are the jobs of at least 5,000 employees.

The proposed DHUD is among President Aquino’s 12 priority bills that he presented to the Legislative-Executive Development Advisory Council (LEDAC) in its February meeting. Executive Secretary Paquito N. Ochoa Jr said that the bill is among the four “Human developments bills” the Aquino administration is determined to have passed into law. 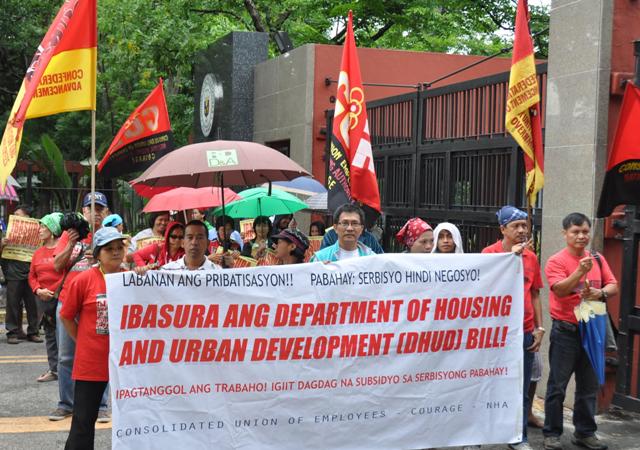 Employees of the National Housing Authority led by their union Consolidated Union of Employees-NHA lead protests against the privatization of public housing and proposals for the creation of the Department of Housing and Urban Development. (Photo by Ina Alleco R. Silverio / bulatlat.com)

Former president and now Pampanga Rep. Gloria Macapagal-Arroyo and her sons Mikey and Dato are behind the first DHUD bill, HB384, which they filed on the very first day of the 15th Congress. It calls for the creation of the DHUD and the consolidation and coordination of five key shelter agencies. HB 1231 by Quezon City Rep. Winnie Castelo and HB 2216 by Mindoro Rep.Rodolfo Valencia also aim for the creation of DHUD.

In the Senate, the consolidated bill on the DHUD is authored by Senators Ferdinand Marcos Jr., Jinggoy Estrada, Franklin Drilon and Miguel Zubiri. Among the proposals in the senate version is the abolition of all key shelter agencies except for Pag-Ibig.

According to Nartes, housing is a basic social service and a state responsibility and the government should not turn it into a business. She expressed disgust at how the Aquino government considers the privatization of public housing a top priority despite the consistent opposition the proposal has faced in the last decade.

“Like its predecessors, the Aquino government is abandoning its responsibility to provide social services to its poor constituents who unfortunately comprise the majority of the Filipino people. By partnering with the private sector in building public housing, it can be expected that the government will confine its function to that of an enabler which is limited to policy formulation and program monitoring. The DHUD itself will only set the stage for the deregulation and the operationalization of various housing finance and multi-window schemes so that big business may invest in socialized or mass housing,” she said.

Urban poor have no access to government housing program

According to government statistics, from 2001- 2004, housing need was estimated at about 3.6 million units. Against the above estimated housing need during the same period, actual supply was only about 0.82 million. According to reports, even if the demand was high, the supply remained low because it was clear that majority of Filipinos cannot afford to buy their own homes. Most poor households cannot afford to pay even the cost of so-called low-cost housing. Estimates show that only about 50 percent of households can afford housing in the formal market but even these are too optimistic.

In the meantime, lack of affordability on the part of the remaining 50 percent has been attributed to rapid rise in the ratio of housing unit cost to income; almost non-existent low-cost alternatives to homeownership in the formal market, and unaffordable, unreachable housing finance schemes being offered to the public.

An assessment undertaken in 2006 estimated that while the total housing need is growing by roughly 626,000 annually, the total output of all government housing programs combined reached only 190,000 per year. The government, which is the biggest provider of low-income housing, was able to come up with only an average annual output of 130,000 units of social housing assistance.

Many housing units constructed by government remain unoccupied because the poor cannot simply afford them. These housing units cost P180,000 (US$ 4,186) each at nine percent interest rate per year payable within 30 years. Monthly amortizations are lowest at P3,000 (US$70). Rent-to-own condominium units financed through Pag-Ibig in Manila require P9,000 (US$209.30) a month payments for 12 months, and a 30 percent downpayment.

Through the years, these housing programs are considered secondary to the more lucrative economic housing programs which targets well-to-do families. Among such schemes calls for the use of private funds of workers and employees invested in the Government Service and Insurance System (GSIS), Social Security System (SSS), and Pag-Ibig as guaranty for investors. Socialized housing is beyond what many poor Filipinos can afford, and critics of the DHUD and housing privatization say that the situation will worsen if the DHUD is established.

“The government considers public housing to be a potential big business. Even now housing programs operate within a macro-urban development framework: the private housing developers have a major role in the delivery of housing infrastructure and services. This leaves mass housing and its attendant social services at the mercy of business entities. Because of this, so-called public housing projects has commercial rates and market-based interest rates . They are hardly within the reach if their intended beneficiaries,” Nartate said.

In its latest estimates, it said that the housing need now stands at 4.2 million units.