You Are Here: Home → 2011 → May → 19 → Union of Government employees raise issue of discontinuance of housing loans with new GSIS leadership

“The GSIS and the rest of the government’s agencies concerned with providing socialized housing should look at this issue not in terms of profitability and return on investments, but as a service to the Filipino people.” – Gaite

In 2009, leaders and members of the Confederation for Unity, Recognition and Advancement of Government Employees (COURAGE ) and its affiliate unions were attacked with teargas and strong blasts from water cannons when they staged a protest in front of the Pasay main office of the Government Social Insurance Service (GSIS). The GSIS then was headed by Winston Garcia. On May 18 this year, they were welcomed with open arms by the new GSIS General Manager Robert Vergara in a dialogue inside the GSIS building itself.

COURAGE initially went to the GSIS to picket the said agency for what it alleged to be the agency’s “continuing failure to provide members with basic benefits such as housing and educational loans.” Ten minutes after the program started in front of the GSIS main gate, Vergara issued the invitation to a dialogue and the government employees accepted with alacrity.
The group led by its president Ferdinand Gaite is against the announcement the agency made recently that it will stop accepting housing loan applications after April 28. According to the GSIS, a growing number of borrowers failed to pay their dues and the GSIS is rethinking its policies when it comes to housing loans. 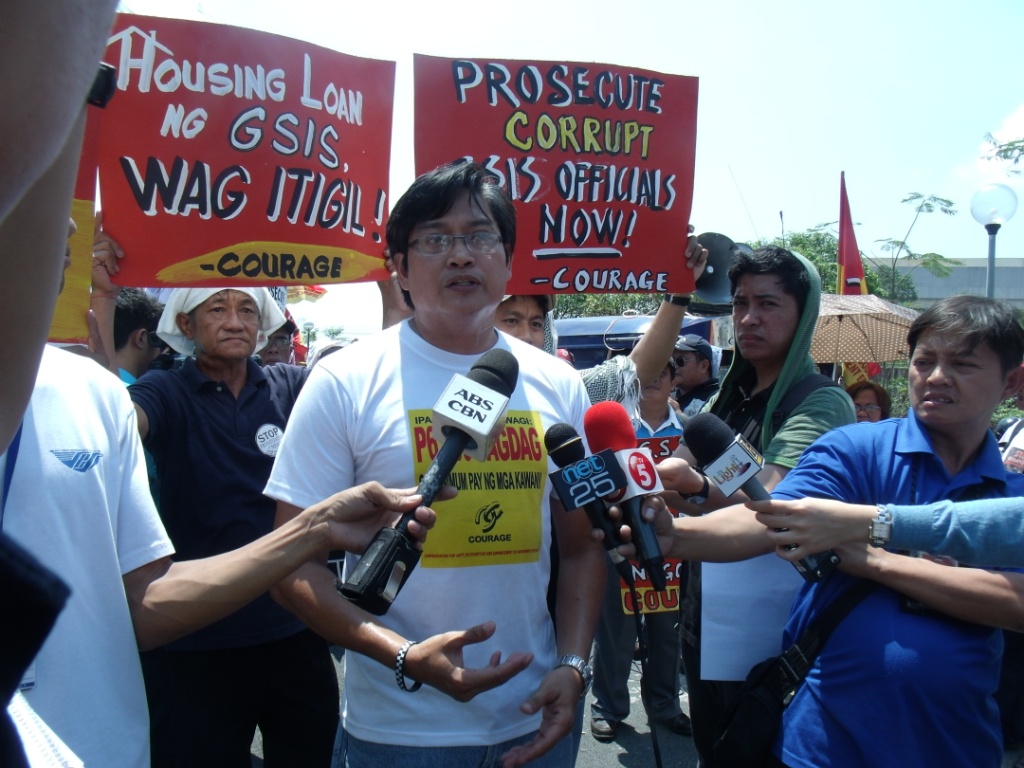 Government employees led by the Confederation for Unity,Recognition and Advancement of Government Employees (COURAGE ) hold a protest in front of the main office of the Government Social Insurance Service (GSIS) against what they said was the mismanagement of the pension fund and the agency’s failure to provide members with efficient service and substantial benefits.”(Photos by Ina Alleco R. Silverio / bulatlat.com) 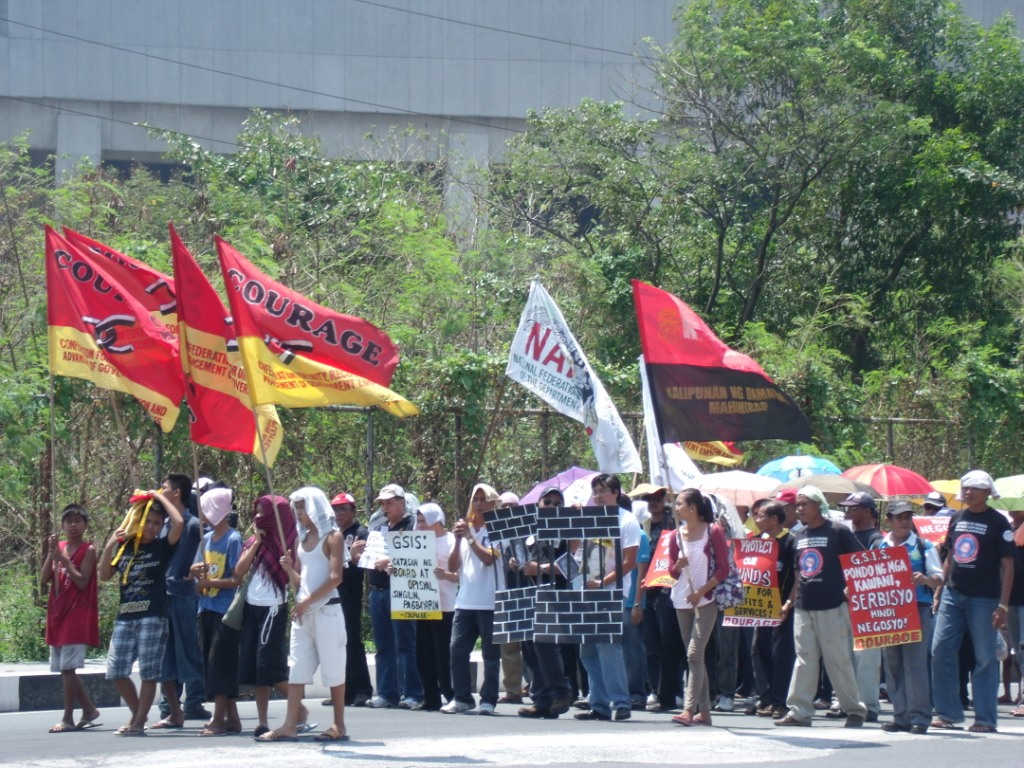 Gaite said the GSIS should reconsider its decision to stop the housing loan program because it is against the interest of low-income earning government employees .

“The right to own secure and decent housing continues to be denied majority of state workers. The issue of social housing is something the Aquino presidency continued to neglect, but now we hear that the GSIS is washing its hands of its responsibility to help us fulfill our humble dreams to own houses of our own,” he said.

During the dialogue with Vergara, Gaite said that the GSIS should consider the societal and humanitarian implications of its decision to stop issuing housing loans. “The GSIS and the rest of the government’s agencies concerned with providing socialized housing should look at this issue not in terms of profitability and return on investments, but as a service to the Filipino people,” he said.

According to reports, some 1.4 million government employees are active GSIS members and the agency has around P11 billion (US$ 255.8 million) unpaid housing loans for 17,000 properties.

“The alleged P 11 billion the GSIS lost because of unpaid housing loans is, without doubt, small when compared to the money lost because of the various anomalous deals and questionable investments the previous GSIS Board of Trustees made,” he said.

According to the labor leader, GSIS loans and services are crucial in augmenting the small salaries of rank and file government employees. “ With the stoppage of the housing loan and the GSIS’ delay in the payment of educational loans, our remaining option for immediate economic relief is being taken away from us,” he said.

Gaite said that these anomalous investments included the US$1 billion Global Investment Fund; former President Arroyo’s P13 billion (US $ 302 million.) economic resiliency fund taken from the GSIS; the purchase of P53 million-worth ($1.2 million) of paintings to adorn the GSIS lobby; the P88 million (US$ 204,6511) compensation package given to GSIS officials; and the P1 billion loan (US$ 23 million) to the Philippine Reclamation Agency (PEA) for construction of the Diosdado Macapagal Avenue, among many others.