The Department of Interior and Local Government (DILG) has also been directed to to order all local government heads in Metro Manila, Laguna, Cavite, Bulacan and Bataan to inspect all factories, commercial establishments and residences along the banks of the Pasig-Marikina-San Juan rivers, the Navotas-Malabon-Tullahan-Tenejeros rivers, the Meycauayan-Marilao-Obando (Bulacan) rivers, the Talisay (Bataan) River, the Imus (Cavite) River, and the Laguna de Bay, and other minor rivers and waterways that eventually discharge water into the Manila Bay.

The heads of the concerned local government units were given until the end of September this year to complete their respective inspections.

According to Pamalakaya deputy secretary-general Gerry Albert Corpuz, they have received reports that officials and staff of national and local government units invoke the SC’s Manila Bay clean-up ruling to justify the demolition of communities along Manila Bay, the Pasig River and coastal communities surrounding the 94,000 hectare waters of Laguna Lake.

“We have also been made aware that the the local government of Navotas is also using the the SC decision to demolish the houses of some 14, 000 fishing and urban poor families within its jurisdiction. The Navotas authorities are removing the houses of the poor not for environmental reasons but because they want to use the areas to build infrastructure that will house commercial projects,” he said.

Corpuz also said that in the municipality of Bacoor, Cavite, the local government under Mayor Strike Revilla limited the areas previously devoted to aquaculture to 90 percent to make way for reclamation projects, planned eco-tourism projects and high rise commercial buildings.

In their letter to Corona, Pamalakaya and its allied groups said that individuals and groups with vested financial interests to corporatize and privatize Manila Bay and Laguna Lake are taking advantage of the SC ruling.

On February 23, 2009, Pamalakaya and fisherfolk groups in Cavite filed a petition urging the high tribunal to let them intervene in the Manila Bay clean up case based on their collective assertion that the decision was being used and abused by the government agencies.

As for the destruction of Manila Bay, Pamalakaya said that it was unjust for the SC or anybody else to allege that it was the residents of the communities living around it who are to blame.

“It should be said that 80 percent of the untreated water wastes that are thrown or dumped into the bay come from industries and commercial establishments situated along the bay. The reclamation activities of the government that started during the Marcos era and which continue up to now are behind the bay’s destruction. The reclamation operations have also prevented the ecosystem and marine life from regenerating,” said Pamalakaya.

SLLM convener Pedro Gonzalez said that the SC decision on Manila Bay is being used to justify the illegal demolition of houses, fish traps and fish cages of the residents in Cavite.

“The rights of small fishermen in the Manila Bay are being undermined. There is no clause or directive in the SC’s decision that allows agencies such as the the Department of Environment and Natural Resources (DENR) the authority to demolish and destroy houses. All this is being done to prepare the areas for corporate projects,” he said.

Gonzalez insisted that it was wrong to blame the communities for the sorry state of Manila Bay. “The ordinary, small fisherfolk are not destroyers of natural resources and marine environment. They know better than to damage much less destroy the source of their livelihood. If anything, they are the biggest victims of the Manila Bay’s destruction. Kill Manila Bay and you kill the people and their means of livelihood, you take away their lives,” he said.

Since the 1970s, more than 20,000 hectares of Manila Bay waters had been subjected to reclamation to pave way for the construction of special economic zones in Bataan and Cavite, the commercial spaces presently occupied by the Manila Film Center, the GSIS (Government Service Insurance System) Building in Pasay City, the Cultural Center of the Philippines (CCP) and Folk Arts Theater in Manila, and the SM Mall of Asia and other commercial companies in Pasay City.

Poverty of the fishers sector

In a separate but related development, the Pamalakaya in tandem with the Center for Environment Concerns released an impact assessment paper revealing the failure of the Philippine Fisheries Law of 1998 to uplift the lives of more than nine million population directly and indirectly dependent to fishing. 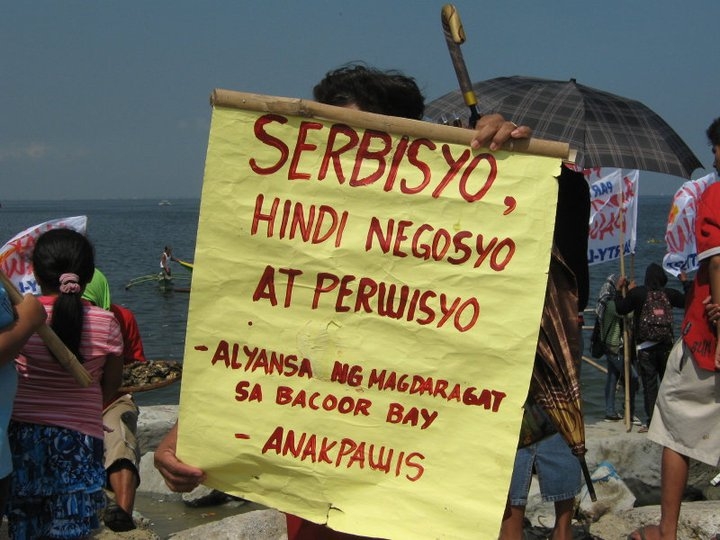 In their paper entitled “13 years of Fisheries Code, Filipino Fisherfolk Still Fish in Troubled Waters,” the CEC and Pamalakaya said that the Fisheries Code failed to raise the standards of living of small fisherfolk. They cited a 2006 study by the National Statistical Coordination Board (NCSB) stating that the fisherfolk sector has the highest poverty incidence in the country. The NSCB revealed the fisherfolk; the farmers and the children comprised the poorest sectors across-the-country with poverty incidence of 49.9 percent, 44 percent and 40.8 percent respectively.

In the same study, 2006, the fisherfolk sector posted the highest increase in poverty incidence, which is 22.7 percent, compared with farmers with 11.7 percent, senior citizens with 11.3 percent, and urban poor with 8.5 percent.

The two groups said that by orientation, by design and by character, the Philippine Fisheries Code of 1998 was “nothing but a law on privatization that aims to destroy the communal character and way of life in fishing. This was vividly seen and experienced by small fisherfolk over the last 13 years where municipal fishing waters are left at the mercy of national government and local government units in partnership with private interests.”

Meanwhile, the Philippine Congress has yet to conduct an impact assessment and performance evaluation of the 13-year old Philippine Fisheries Code of 1998. Under the 1987 Constitution and existing jurisprudence on the legislative functions of Congress, the legislative branch is constitutionally bound to review any enacted law every five years to determine if such product of legislation had served the best interest or not.