You Are Here: Home → 2011 → May → 24 → Kin of victims of Maguindanao massacre fear that the Ampatuans have same privileges as Leviste

Mrs. Editha Tiamzon, wife of Daniel Tiamzon of UNTV who was killed in the massacre, appealed to Interior and Local Government Secretary Jesse M. Robredo to allow them to visit the Ampatuans in jail.

MANILA – When news broke out that former Batangas governor Antonio Leviste went in and out of the New Bilibid Prison (NBP) at will, relatives of the victims of the Ampatuan massacre could not help but feel uneasy. They reiterated their call to be allowed to check if the Ampatuans are still in jail.

Former Batangas Governor Leviste was arrested by authorities May 18 after leaving the NBP premises. He is sentenced to six to 12 years of imprisonment after he was convicted with homicide for the killing of his long-time aide, Rafael de las Alas, in 2007 inside his office in LPL Tower in Legaspi Village, Makati City?

Editha Tiamzon, wife of UNTV’s Daniel Tiamzon, related that she and other families of victims went to Camp Bagong Diwa in January to check if the Ampatuans are still there. “We only wanted to ensure that they are still there but we were made to wait for one hour and were never allowed to enter the premises,” Mrs. Tiamzon said during the Monday’s event to commemorate the massacre on November 23, 2009 that claimed the lives of 58 individuals, including 32 journalists.? 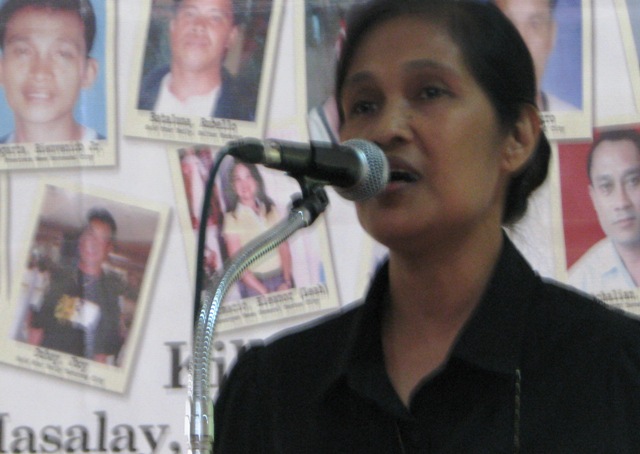 Editha Tiamzon, widow of one of the victims of the Ampatuan massacre, calls for justice for her husband Daniel.(Photo by Ronalyn V. Olea / bulatlat.com)

“That is what we fear now. Ex-governor Leviste was able to go in and out of prison because he is moneyed, so is our enemy. When we went to check if the Ampatuans are still in prison, the BJMP told us that they were asleep during the day. Why is that so? It raises suspicions that maybe they are being allowed to go out at night that is why they are asleep during the day,” Mrs. Tiamzon said.

Mrs. Tiamzon appealed to Interior and Local Government Secretary Jesse M. Robredo to allow them to visit the Ampatuans in jail. “We will not hurt them. We have already forgiven them but we still want justice to be served,” Mrs. Tiamzon said.

Alwyn Alburo, vice chairman of the National Union of Journalists of the Philippines (NUJP), said that they are awaiting President Benigno S. Aquino III’s promise to put a closed circuit television [CCTV] in the detention cells of the Ampatuans.

Out of 196 suspects in the Ampatuan massacre, only 90 have been arrested. Only a few has been arraigned and only one case is undergoing trial.

“We have no money to pay newspapers, radio and television networks to express what we feel. It is only in the streets where we can shout how we feel about what is happening. But what happened to one of us? She was charged with contempt,” Mrs. Tiamzon said.

A special division of the Court of Appeals (CA) issued a resolution April 12 charging Salaysay and Rowena Paraan, NUJP secretary general, of contempt.??The five justices of the CA who issued the resolution accused Salaysay and “foisting bias and corruption” against the court for their statements quoted in a news article where they expressed concerns on the?slow pace of the case.??“She [Salaysay] is one of those who spoke bravely but now she feels depressed because of the contempt charge,” Mrs. Tiamzon said.

Meanwhile, Karry Sison of the Public Interest Law Center (PILC) said there has been no action yet regarding the petition filed before the Supreme Court for live media coverage of the Ampatuan massacre trial.

Families filed the petition in November last year. The defense has filed its comment and the PILC in turn has filed its reply in January, according to Sison. 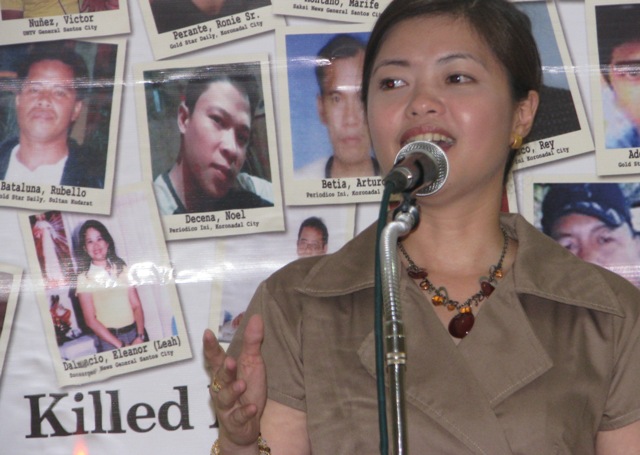 Lawyer Karry Sison says live media coverage is instrumental for the public not to forget the Ampatuan massacre.(Photo by Ronalyn V. Olea / bulatlat.com)

“Live media coverage is instrumental for the public not to forget [about the massacre],” Sison said, stressing that the petition asserts the freedom of the press not only for media but for the Filipino people in general.

“Alongside freedom of the press is the people’s right to information,” Sison said. “The people also have the right to a fair and public trial.”

Sison added that most of the families of the victims live outside Metro Manila. “Their situation prevents them from attending the hearings.”

In his speech, Luis Teodoro, deputy executive director of the Center for Media Freedom and Responsibility (CMFR) and former dean of the University of the Philippines College of Mass Communication, encouraged the media to continue its coverage of the trial and of other aspects related to the massacre such as the dismantling of private armies.

“We must be more creative… Without the media, things will remain a secret to the public,” Teodoro said.

In a statement, the NUJP said that a year and a half after the massacre, “the wheels of justice, which have always ground slow, appear to have stalled to an almost dead stop and, worse, remain in danger of being reversed.”

The NUJP also said that “dark forces responsible for the carnage have been allowed to remain intact – both in wealth and firepower—and continue to attempt to buy off victims’ relatives, and witnesses and their families, or, failing that, threaten or even harm them.”

In the 2010 elections, 18 members of the Ampatuan clan were elected to office.

Against all the odds, Mrs. Tiamzon said: “We cannot stop fighting.”