The access road and the interchange were constructed and paid for by the Bases Conversion and Development Authority, and yet Hacienda Luisita Inc. charges toll fees; the farmers were not given their share of the sale of the right of way, and the Cojuangco family did not pay the government for royalty fees for the quarrying activities.

Anakpawis Rep. Rafael V. Mariano today called on the Lower House to conduct a probe on the illegal collection of P20 (US$.465) toll fee by the Hacienda Luisita Inc. (HLI) from motorists using the San Miguel access road inside the Luisita enclave to reach the Subic-Clark-Tarlac Expressway (SCTEX).

In House resolution 1329, Mariano said that the HLI did not pay for the construction of the interchange and has no legal right to impose fees on commuters using the interchange. He said all the costs of the road construction was shouldered by the contractor of the Bases Conversion and Development Authority (BCDA), the owner and operator of SCTEX.

According to reports, the HLI started to collect a P20 (US$.465) toll or service fee from motorists passing the access road in Barangay San Miguel inside the Hacienda Luisita enclave to reach the SCTEX last May 17, 2011. HLI co-owner Jose ‘Peping’ Cojuangco Jr., uncle of President Benigno Simeon Aquino III, told the media that the toll fee is for road maintenance and repair. 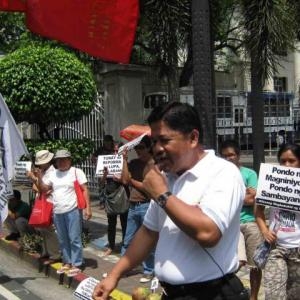 According to Anakpawis Rep. Rafael Mariano, the Hacienda Luisita Incorporated did not pay for the construction of the interchange and has no legal right to impose fees on commuters using it. He said that all the costs of the road construction was shouldered by the contractor of the Bases Conversion and Development Authority (BCDA), the owner and operator of SCTEX. (Photo by bulatlat.com)

Rep. Mariano pointed out that the 7.5 kilometer San Miguel access road that connects the Luisita Parkway, now the Luisita Industrial Park, to SCTEX, was built based on an agreement by the HLI and the Bases Conversion and Development Authority (BCDA), the owner and operator of SCTEX.

“It has come to our attention that the HLI did not seek permission from the Toll Regulatory Board (TRB), saying that the TRB has no jurisdiction over Luisita because it is a private land and not part of the expressway. Based on reports, although the HLI delivered on its commitment to BCDA to build an access road inside the sugar estate in Tarlac, it did not pledge to make it toll-free for the users of SCTEX,” he said.

In the meantime, the BCDA has issued clarifications that the interchange was built to connect Luisita to Subic and Clark economic zones and the San Miguel access road was built for public use. BCDA reported spending P34.106 billion(US$79, 316) on the project, which was funded by loans from the Japanese government (79 percent) and a counterpart fund from the Philippine government (21 percent). The BCDA bought 80 hectares from HLI for the right-of-way of the SCTEx and the Luisita interchange.

An estimated 4,000 vehicles pass through the Luisita interchange daily. SCTEx also has interchanges in Concepcion and La Paz towns in Tarlac. If the HLI continues to collect toll fees, it would earn an estimate of P2.4 million (US$55,813) per month and P28 million (US$65,116) annually.

“If the collection of the P20 toll will continue, HLI will earn millions,” Mariano said. He also said that the receipt issued by the HLI for the said toll fee does not have a tax identification number (TIN).

House ways and means committee chairman Batangas Rep. Herminigildo Mandanas said reports have reached the chamber that HLI is not issuing receipts after collecting toll fees. He said that if this is the case, the HLI could be held liable for tax evasion.

The TRB has already begun a legal review on the right of HLI to collect toll on the said road. It said that the review and its results will be used in the determination of whether it would allow or stop the HLI from collecting fees.

“Even if the president’s uncle, Jose ‘Peping’ Cojuangco Jr. argues that the land is private and they do not need the TRB’s permission, the whole matter should be investigated because it’s quite unclear if the HLI does have the legal authority to collect fees from the public. The Cojuangcos cannot just arbitrarily impose fees and payments at whim,” Mariano said.

According to reports, the TRB has verified that the Barangay San Miguel access road is “privately owned and not part of the expressway.”

Cojuangco has also made the assertion that the HLI built the 5-km San Miguel road and extended it by another 2.5-km in 2006.

In the meantime, the peasant group Kilusang Magbubukid ng Pilipinas (KMP), said that the collection is arbitrary and illegal and tantamount to corruption because the HLI is owned and operated by the President’s relatives. HLI is 70 percent owned by the Tarlac Development Corp., a company also run by the Cojuangco clan.

“We received information that even farmers, the legitimate owners of Hacienda Luisita, are prohibited from freely moving within the area without approval from the management , and that they themselves are being forced to pay the P20 toll fee,” says KMP secretary general Danilo Ramos.

Quoting reports from Luisita farmers, Ramos said that resident-farmers who own vehicles are being required by the HLI management to submit the plate number, copy of vehicle registration, and a payment of P50.00 (US$1.16) for a so-called sticker or gate pass for the vehicle.