MANILA — In marking the “National Day of Workers’ Condemnation Against Meager COLA’s,” labor center Kilusang Mayo Uno appealed to the country’s politicians to “do a Pacquiao” and support the P125 Wage Hike Bill pending in the House of Representatives, referring to boxing champ Manny Pacquiao who recently announced support for the bill.

Demonstrating that its struggle for a substantial wage hike is continuing, KMU led protests in various parts of the country condemning the approval of meager Cost of Living Allowances in Metro Manila and other regions.

In Metro Manila, noise barrage protests were held in Anda Circle and Paco in Manila in the morning and in Novaliches in Quezon City, Sta. Mesa in Manila, Pasay Rotonda and Pasig in the afternoon. Passersby were asked to sign a petition supporting House Bill 375 or the P125 Wage Hike Bill, as protestors wore boxing gloves with stickers supporting the bill.

“We are urging the country’s politicians to follow the lead of boxing champ Manny Pacquiao who has just heeded workers’ calls for support for the P125 Wage Hike Bill. Together, let us give hunger and poverty a black eye with a 1-2-5 punch through the P125 Wage Hike Bill,” said Elmer “Bong” Labog, KMU chairperson.

“Workers need the widest support from all sectors in our society to achieve immediate relief from the unabated price increases through a significant wage hike. The Filipino workers and people are showing that they are resolute in the struggle for a P125 across-the-board wage hike nationwide, and all sectors of society are invited to join the wage fight,” he added. 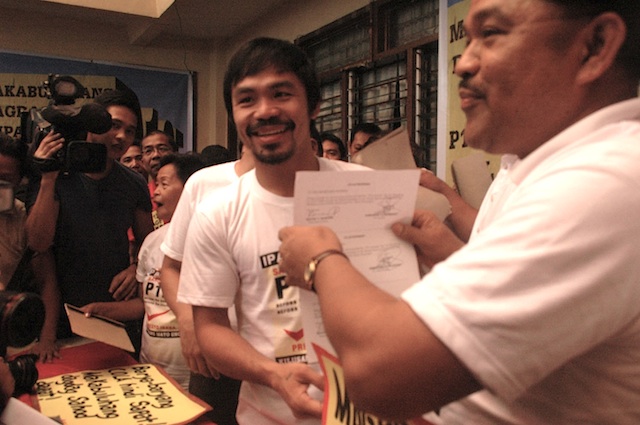 “No amount of pantawid or pa-pogi like the meager COLA’s will quench our thirst for a significant wage hike. The prices of basic goods and services continued to increase even after the COLA’s were approved, and are slated to inrease some more in the coming weeks and months,” he added.