In his first year, Aquino did nothing to improve education, bring down fees — Anakbayan

“ These annual budget cut in the state subsidies of the SUCs will inevitably push SUC administrators to implement various income generating projects to sustain the schools’ operations at the expense of the students,” Pasco said.

The student leader also said that the schools in the region also introduced new fees, some of them bordering on the absurd.
“Some schools are charging ‘ development’ fees, ‘energy’ fees that are different from the ‘electricity’ fee; then there’s the ‘restricted’ fee, something that’s completely baffling. Students of the MSU Main Campus are required to pay an IT Fee for five hours of computer use for the whole semester: the school only has 90 computer units that will have to be shared by 15,000 students,” he said.

Pasco also expressed incredulity over how some schools are also charging ‘laboratory fees;’ “students who don’t have subjects requiring laboratory work still have to pay this,” he said. According to him, the MSU-IIT also charged students P25 as a medical fee, this besides the medical insurance fee that cost P40. 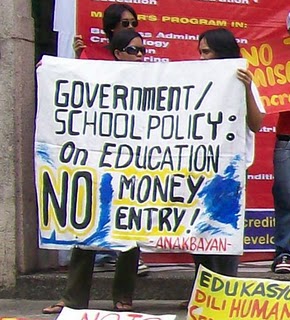 “ Cagayan de Oro College students were shocked when they were made to fork over money for the additional Student Services Fee. They had to pay P1,046 (US$ 24.32) , and another P200 (US$4.65) as registration fee. In addition to this, schools collect PRISAA/COSAA fees, even if they’re not into sports,” he said. “Whether or not they’re members of the school varsity teams, all students are being charged varsity fees, physical education fees and athletic fees.”

Previous to the opening of classes last June 13, youth groups led by Anakbayan also decried what they said what the “absence of true freedom” in the country. Anakbayan’s Crisostomo reacted to President Aquino’s Independence Day speech wherein the latter claimed that his administration has passed reforms which “are meant to give (Filipinos) a taste of true freedom.” 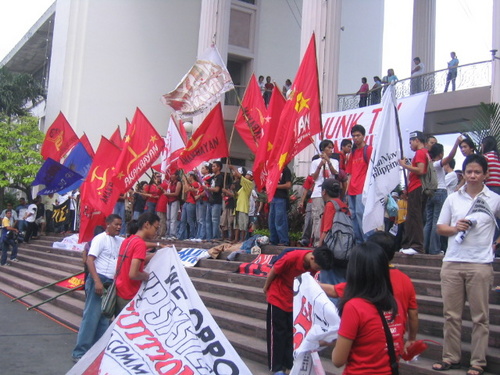 “Aquino defined true freedom as freedom from hunger, ignorance, poverty, and joblessness. Yet under his first year, the number of hungry, jobless, and poor Filipinos actually increased. The number of school drop-outs also remain numerous,” he said.

In recent months, surveys have revealed that the number of hungry and jobless Filipinos have shot up: from 3.4 million to 4.1 million families, and 9.9 million to 11.3 million unemployed. In the meantime, seven million children from the ages six to 15 years are currently out of school.

“It’s not surprising that Aquino failed to live up to his own definition of freedom: he’s the most pro-US imperialism, ‘AmBoy’ president we’ve had in years,”he said.

Crisostomo also said that Aquino’s policies have guaranteed that Filipinos will never gain freedom from poverty.

Crisostomo also said that proof of Aquino’s subservience to the United States and its economic and politic al interests was his refusal to implement a minimum wage because of pressure from the American Chamber of Commerce, Employers’ Confederation of the Philippines, and other groups representing foreign corporations in the country.

“The Aquino administration continues to ignore data showing that that a P125 (US$2.90) across-the-board nationwide wage hike will cost enterprises employing at least 20 people a mere 15 percent of their combined profits,” he said.

He also said that another proof of Aquino being an “AmBoy” was his stand to uphold the Visiting Forces Agreement (VFA) and allow the continued presence of US troops.

“It was also rumored last month that Malacañang is entertaining plans for a return of the US military bases in the country. It has also kept silent about the permanent presence of 700 American soldiers under the Joint Special Operations Task Force-Philippines which maintains its HQ at Zamboanga City,” he said.