A militant youth organization based in Southern Tagalog decried the arrest of its seven members after the group led a lighting rally last June 19. President Benigno Aquino III was delivering a speech on the national commemoration of the 150th birth anniversary of national hero, Jose Rizal when the students began shouting slogans denouncing the Aquino government for its reported failure to enact its promises of social change including reforms in the education sector.

The Presidential Security Group were able to arrest seven of the protestors, among them Mikel Mozo, Ynik Ante, Ruffa Solano, Bhen Aguihon and Cathy Gigantone, all members of Kabataan Partylist from its chapter in the University of the Philippines Los Baños. The other two others are Joefrey Barreto and Rodel Badayos of Anakpawis Partylist- Southern Tagalog.

“If Aquino really values what Rizal lived and died for, then why does his government neglect the welfare of the youth whom Rizal himself said was the country’s greatest hope?” said John Paulo Bautista, Anakbayan ST coordinator. 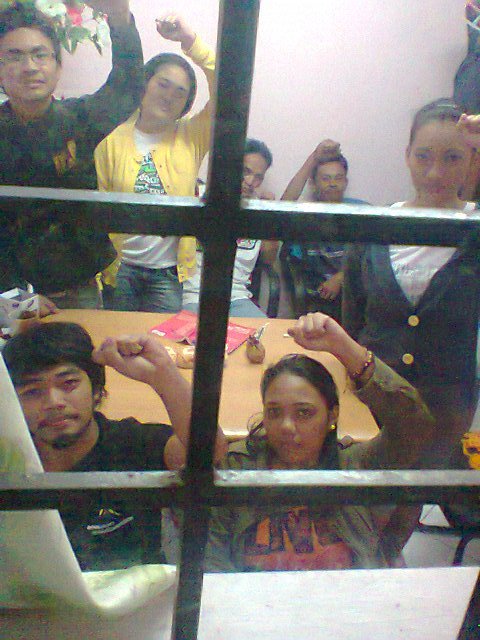 “Aquino has shown blatant disregard for the education sector. Because of the P1.39 billion ($32.3 million) slashed from the education budget, thousands of youth from Southern Tagalog failed to enroll this semester. His government has abandoned its responsibility to make education accessible to all Filipinos, and for that it deserves the strongest condemnation.”

A spokesperson of Kabataan Party-List in UP Los Banos said that tuition has increased in the state university’s regional campus. Tuition there is now pegged at P1500 ($34.88) per unit.

“Once upon a time, UPLB touted itself to be a university that provides quality agricultural education for the poorest of the poor including students whose parents are farmers. Now the UPLB cannot make this claim,” Urrea said.

In the meantime, the students said that like in the days of Rizal, majority of farmers in Southern Tagalog remain landless. ” This is because of rampant land-use conversions and the land-grabbing of local landlords,” said Anakbayan-Timog Katagalugan Deputy Secretary General Neil John Macuha. He recalled how last year farmers and their supporters from the ranks of student groups were arrested after holding a protest against injustice and landlessness.

“Nothing has changed under Aquino. Filipinos in the Southern Tagalog region remain victims of landlessness and poverty. Now more than ever, young Filipinos greatly understand how their fight for quality and accessible education is tightly connected to struggle of farmers for genuine land reform. Rizal depicted the poverty of farmers and their plight at the hands of the landed gentry and landgrabbers. The social cancers that Rizal wrote about still afflict the country,” Macuha said.

Vanessa Faye Bolibol, Secretary-General of the National Union of Students of the Philippines (NUSP), said the arrest of the students was supremely ironic given that the Rizal was a staunch advocate of democratic rights.

Dan Ramos, of the Katipunan ng mga Sangguniang Mag-aaral sa UP (KASAMA sa UP) also expressed dismay over the government’s neglect of the needs of the education sector.

“Youth and students have no choice but to continue pressing for their demands for quality and affordable education. After all, it is our future that’s at stake and if we don’t defend our rights then no one else will,” he said.

The protest action also marked the 10th anniversary of the establishment of Kabataan Partylist which has one representative in congress, Rep. Raymond Palatino.

In the National Capital Region, student groups led by Anakbayan have announced a countdown of protests to mark Aquino’s first year in office on June 30, and that these will culminate on the day he delivers his second State of the Nation Address on July 25.

On June 24, Anakbayan will hold a rally at the Commission on Higher Education national office to reiterate its demand that the institution scrap all miscellaneous fees in universities and for it to regulate tuition increases in the tertiary level. The following day, students led by the group will march against the Visiting Forces Agreements and other unfair treaties and agreements with other nations most likely in front of the US Embassy in Manila.

On June 26, a “fun run” has been scheduled to gather renewed support for the campaign for the release of abducted UP students Karen Empeno and Sherlyn Cadapan. The same day marks the 5th anniversary of their abduction at the hands of the military.

A rally against the planned demolition and eviction of half a million families in Metro Manila to make way for Public Private Partnership (PPP) projects will be held on June 27. Students will also conduct a forum discussing the achievements or lack thereof of the Aquino administration on the same day in the Polytechnic University of the Philippines campus. The same will be done on June 29, only the forum will be held in UP Diliman.

On D-day, June 30, Anakbayan and allied students groups such as the NUSP , the League of Filipino Students and the College Editors Guild of the Philippines will join the protest to be led by the Bagong Alyansang Makabayan (BAYAN).

“Aquino has delivered a litany of promises, but none of them has ever born fruit. Students from impoverished families have very little access to education because their parents are victimized by low wages and very poor livelihood opportunities,” said Vencer Crisostomo, Anakbayan’s national chairman.

“In his SONA last year, Aquino said that under his administration, the Filipino people can begin to dream again. Little did we know that Filipinos would actually suffer nightmares because of his government’s deliberate failure to uplift the lives of the poor by providing employment, increasing wages, and bringing down the costs of public transportation, electricity and water services among others,” he said.