CASIGURAN, Aurora – An Agta resident here, who has been living here, tending several coconut trees, fruit trees, and has been doing wet-season rice planting in the heart of the Casiguran peninsula, some 500 kilometers north of Manila, was surprised to learn that the government is now claiming the land through a congressional action in 2010.

He is among the descendants of the original Agta families who have peopled the vast estate that is now covered by the Aurora Pacific Economic Zone and Freeport Authority (Apeco). Like him, members of his kin came down from their mountain abode with their children in tow or carried in the traditional cloth strapped across the breast.

Republic Act 10083, passed on April 22, 2010, created Apeco. The project covers 13,000-covering five barangays with a combined population of 5,430. Formerly called Aseza, or the Aurora Special Economic Zone Act, (RA9490) the coverage used to be only 493 hectares in the villages of Estevez and Dibet. The expansion now covers three other villages – Culat, Cozo and San Ildefonso – where most indigenous Agta and Dumagat groups live.

“It used to be Aseza covering only a small portion. Now that it is Apeco, the coverage expanded a lot, even encroaching into the ancestral domains of the Agtas,” an Agta community elder told the National Fact-finding and Solidarity Mission team that looked into the impacts of Apeco on the people of Aurora and its environs. 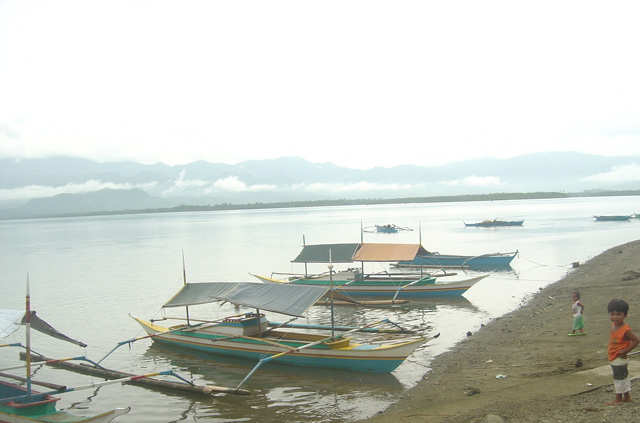 A community of Agtas in Casiguran, Aurora.(Photo by Lyn V. Ramo / bulatlat.com)

Deceiving both IPs and settlers

What appalls the indigenous peoples of Casiguran is the present move to disenfranchise them further from their ancestral domain through a scheme that would appear as massive land-grabbing by Apeco.

Holding no document that they are indeed the legal owners of the piece of land they are tilling, the Agtas were informed that another group of indigenous peoples are applying for a certificate of ancestral land title (CALT) and the National Commission on Indigenous Peoples (NCIP) is allegedly processing the said application.

As it turned out, a small group from the Mountain Province and Ifugao, whose members have settled in the area in the late 90’s, asked the NCIP to delineate the parcel of land that includes some lands being tilled by both the Agtas and old Bicolano settlers.

“They are dividing the indigenous peoples,” Mayet Corpuz of Samahan ng mga Katutubo sa Sierra Madre (SKSM) and a member of the Katribu party-list local chapter said of the CALT application by the Igorots of Mountain Province and Ifugao. “It is very clear that they are employing the IP settlers against the local IPs in order to facilitate land-grabbing,” Corpuz said.

Kakay Tolentino of Katribu Partylist, also a Dumagat, said the NCIP could not have accepted these applications because it is only deceiving the upland farmers, making them hope that they would own the land under the Indigenous People’s Rights Act (IPRA), when these are not even indigenous peoples of Aurora.

Tolentino said only the Dumagat Agtas and the Bugkalot peoples are eligible to be awarded a CALT in the province of Aurora.

Most respondents to the Casiguran NFFSM 2011 said there were government employees who asked them to apply for CALT or Apeco would take away their lands, so they obliged believing that this remedy would truly give them security.

Most of these settlers came from Bicol in the late 70’s to 90’s. They are recipients of an integrated social forestry certificate of stewardship contract (ISF-CSC) for two to five hectares of land they have transformed into upland agricultural lands. These are now vegetated, beside the traditional forest covers that have sustained indigenous peoples’ villages, by coconuts, bananas, fruit trees, root-crop cassava, sweet potatoes and the San Fernando taro. Some even have rambutan, pili, langka, star apple, and abaca, together with Bicol fruit trees that they have tried to raise when they came from Bicol some two to three decades ago.

Recently, the settlers signed a petition for the government and Apeco to respect the rights of indigenous Agtas to their ancestral land and also that of the settlers to the land they have made productive with their long years of hard labor.

In a bid to acquire lands from indigenous peoples and settlers alike, Apeco has also allegedly employed the services of the PR Bank, buying out landowners even if there are no legal tenure instruments that show proof of ownership and possession of the parcels of land it is buying. The price of land is allegedly pegged at P5,000 ($116) regardless of the land area.

Even some local elite have reportedly started to buy out the old settlers by offering unusually handsome sums for untitled parcels of lands. Some even tend to short change the farmers by just paying for the improvements they introduced into the land like the trees and plants, without paying for the land. One respondent said a coconut tree commands P10 ($0.23) for every year it has stood on the land, that a fruit-bearing tree is priced at P100 to P150 ($2.32 to $3.48) . Bananas are a lot cheaper at P5.00 ($0.11) per tuber.

ISF CSC claimants are apprehensive that the certificates will expire in two years. The ISF is for the stewardship of part of the forest land for a period of 25 years, renewable for another 25 years. Most respondents in the five barangays said that environment officials, who visited them and conducted a meeting, informed them of the government’s intention not to renew the contract.

Most ISF-CSC’s were issued from 1979 to 1992, the older claimants passing on to their sons and daughters smaller portions, believing these can be bequeathed as a piece of inheritance.

As for the Agtas, the NCIP has yet to finalize the delineation of CALT that will carve out their ancestral lands from the Apeco coverage. This, however, is beside the point, according to Bagong Alyansang Makabayan Gitnang Luzon (Bayan-GL) Chairperson Roman Polintan, who was also in the NFFSM 2011.

“Indigenous peoples, especially the Dumagat, to which the sub-group Agta belongs, used to claim the whole country as their ancestral domain,” Polintan explained. Carving out just a portion of Casiguran, Aurora for the Agta peoples just to give way to a project that would later deny them access to their traditional territory will not be acceptable, according to the Bayan-GL chairperson.

Sowing fear and a state of terror

The government through Apeco, uses other settlers to threaten settlers and indigenous peoples to sow intrigues and conflict in the local villages. It is apparent in the results of the NFFM that there are certain individuals up to bring havoc in the communities.

One example is the harassment and intimidation of known community leaders. Last year, Councilwoman Merlita Curioso of Cozo village lost her husband in the hands of alleged prospector of vacant parcels of land that his cohorts have allegedly been eyeing. The people were not naming the suspect in the killing but the fact that there was no investigation conducted into the incident sends a chilling effect on most residents, especially those who have been vocal about their convictions.

Another farmer-leader, Lino Romero, reportedly received a threat from the local environment officer who allegedly told him not to cut weeds inside his ISF lest he would be arrested. The context of the threat is the present total log ban policy.

Besides the environment officer, another settler reportedly threatened Romero not to pursue clearing a portion of his ISF claim because it no longer belonged to him.

“This is a clear show of the divide-and-rule tactic,” Katribu’s Tolentino said.

“Foreign monopoly capitalists are the biggest land-grabbing forces in cohorts with local and national government agencies which tend to favor foreigners, forgetting the rights of the IPs to their ancestral lands,” Polintan said.

Piya Malayao, spokesperson of the Kalipunan ng mga Katutubong Mamamaan ng Pilipinas (Kamp) disclosed that energy projects, large-scale mining operations, large dams, economic zones and other “development projects” have gotten in the way of IPs and have continued to take away the land and its resources away from both settlers and indigenous peoples.