CASIGURAN, Aurora – Adarlina Constantino, 70, was still young when she and her husband Simplicio went to Reserva subvillage, Estevez to hack out a farm plot a little less than four hectares. Back then in 1968, the land developed by the Constantino family was a forest lush with narra, dau and other trees.

On the same year, Florentina Solis, 71, and her family migrated to the subvillage from Cabugao, Ilocos Sur. “We were the ones who cleared the land,” Solis said. They planted palay, corn, coconut and vegetables on a piece of land measuring about a hectare and a half.

The small parcels of land being tilled by the two families are part of the 110-hectare reservation for an agricultural school. The reservation was declared by then Governor General Frank Murphy in 1935. From 1960s onward, many peasant families like Constantino and Solis worked on the land and made it productive for agriculture.

After years of cultivating the land mainly for domestic consumption, hundreds of peasant families in this subvillage are now under threat of being displaced to give way to the Aurora Pacific Economic Zone and Freeport Authority (Apeco) project.

On February 10, 2010, Provincial Environment and Natural Resources Officer (PENRO) Benjamin Miña, together with police escorts, went to Constantino’s house and told the latter to leave the land. Miña said the land would be used as a relocation site for 450 families from Estevez village who would be removed to give way to the Apeco. 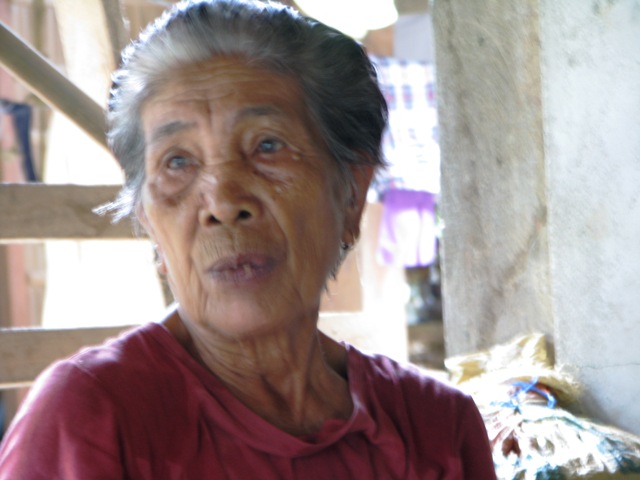 Adarlina Constantino refuses to leave the farm she and her family have tended for more than four decades. (Photo by Ronalyn V. Olea / bulatlat.com)

“How could we survive if we leave the land? How could we send my grandchildren to school?” Constantino said in Filipino, her hands, already wrinkled, shaking. Five of her children and 27 of her grandchildren depend on farming for survival. Her husband, who passed away last year, made them promise not to leave the land they have tilled for more than four decades.

“Miña keeps on telling us that we are squatters in this public land. Did we clear the land for the benefit of others?” Constantino asked.

Solis said they, too, would not give up the land.

She said that since 1972, they have been appealing to government agencies to place the land under land reform coverage but their demands fell on deaf ears.

“What we know is that this land is no longer a reservation for the school,” Solis said.

Except for the small portion of land where the Casiguran National High School was built, the rest of the 110 hectares is prime agricultural land. Rice cultivation in this village transformed Casiguran as the rice granary of northern Aurora.

“All laws on land reform say that we, the tillers, have the right to this land,” Solis said, as she held up a small handbook containing Presidential decrees and executive orders on land reform. Until now, though, they are considered illegal occupants. 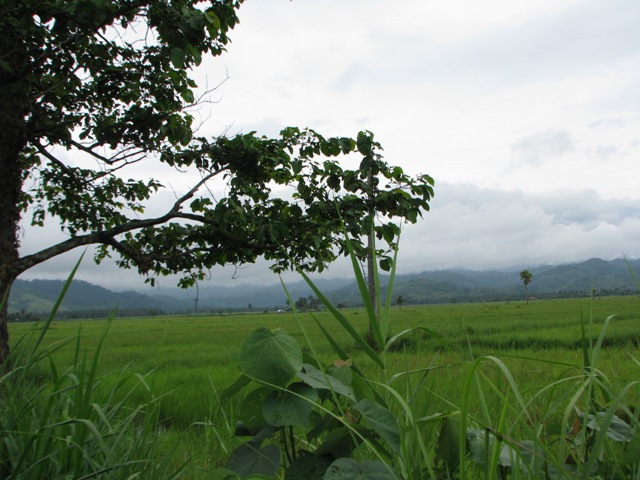 This ricefield in Reserva subvillage, Estevez village in Casiguran, Aurora, used to be a forest.(Photo by Ronalyn V. Olea / bulatlat.com)

“Miña insists that we have no right over the land. [The law states] all alienable and disposable lands should be distributed. Does he [Miña] think we could not understand what that means? Now, we are the ones being disposed of,” Solis said.

On November 31, 2010, Solis and her fellow farmers went to the Department of Agrarian Reform (DAR) in Manila. “DAR officials told us that the land should be awarded to us but they also told us to negotiate with the Angaras,” Solis said, referring to Undersecretary Anthony Parungao and then Undersecretary (now Secretary) Virgilio delos Reyes. “They did not do anything to help us,” she said.

Maribel Castillo who belongs to a family of fisherfolk said Apeco was offering to buy her small piece of land located at Landing subvillage, where the airport is located.

Castillo said she was being offered P50,000 ($1,162) per hectare and she turned down the offer. “We have nowhere to go,” Castillo said, adding that the planned relocation site at Reserva subvillage is not for free and a single house measuring about 50 square meter would be sold at P200,000 ($4,650) .

Like Castillo, Pastora Ramos, 57, did not sell her one-hectare agricultural land but leased it to Miña for five years at P100,000 ($2,325) in April 2008. She went to her relatives in Mindoro and stayed there for a while. When she came back in October 2010, she was shocked to see the construction of the Apeco administrative building right in her own lot.

“I only leased my land to Miña. There was no deed of sale. How come the Apeco occupied my land?” Ramos said, crying. With the help of other farmers, she built a small hut in front of the building.

Estevez is only one of the five villages affected by Apeco, a P1 billion ($23.2 million) economic zone project in Aurora. Parcel 1 of the Apeco involves 493-hectares in Estevez and Dibet villages, while Parcel 2 involves 12,427-hectares covering Cozo, Culat and San Ildefonso villages. More than 5,000 live in the five villages. The project would consist of the construction of residential, commercial and industrial projects, ports, eco-tourism, highway, airport, among others.

“The APECO project is an actual machination of the legal system to monopolize land and resources by a rich few such as the Angaras, at the cost of destroying the lives and livelihood of the farmers of Casiguran,” Joseph Canlas, AMGL chairman, said.